Kids are returning to the classroom, but it's not the same. These are the publicly traded companies cashing in on the new and highly unusual school year.

Kids are going back to school across the country, and it's obviously really different this time. Parents and students will still be spending money ahead of the new school year, but that money won't be going to the traditional back-to-school winners.

Barron's ran a story over the weekend, singling out four stocks that it expects will thrive despite the pandemic challenges. It singled out discount retailers and even an athletic footwear giant, but who are we kidding? We all seem to know the real winners of the new normal.

Zoom (ZM -1.75%), Amazon.com (AMZN -2.30%), Logitech (LOGI -0.43%), and Wayfair (W -0.93%) are some of the obvious and perhaps not-so-obvious beneficiaries of this season's back-to-school shopping sprees. Let's take a closer look at why these four publicly traded companies are the right names to own. 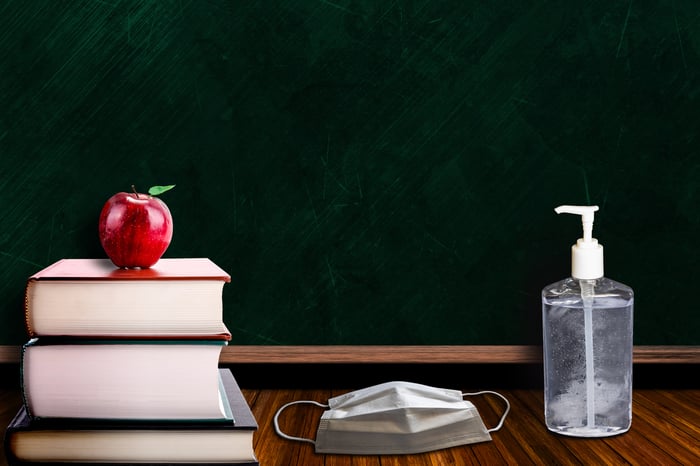 The majority of schools across the country aren't resuming in-person classes. Teachers and school administrators have been brushing up on the virtual classrooms that they had no choice but to quickly migrate to in the spring. Zoom was the undisputed platform of choice then -- and it is leading the way now.

Growth at Zoom has been as explosive as you'd probably imagine. Revenue soared 169% to $328.2 million for its fiscal quarter that ended in April. Its guidance for the quarter that ended last month -- and that Zoom will discuss next week -- calls for revenue to accelerate to a 240% to 243% increase.

The bearish knock on Zoom is that its success is temporary. Students will head back to classrooms when the pandemic passes, and their parents will return to in-person meetings.

But I don't buy it. Zoom isn't a tool that we'll throw in a 2020 time capsule. The families getting together on Zoom will continue to stay in touch. Zoom's viability in the workforce and classroom won't be ignored, especially now that we've had months to get better at making the most of video conferencing. Zoom has had as many as 300 million meeting participants in a single day. It's not going away. It's going to make a lot of what we did pre-COVID-19 better.

Brick-and-mortar retail has been fading for years, and the pandemic has sped up the evolutionary process. A lot of mall chains won't be around a year from now. There have been a couple of winners in the real world, but there are more losers than victors in retail. The ultimate winner, obviously, is Amazon.

Amazon's net sales soared 40.2% in its latest quarter. It's Amazon's strongest growth in two years and only the second time in the past eight years that its top line has surged by more than 40%. The world's leading online retailer was made for this climate. Folks hunkering down at home can get reasonably priced merchandise -- including groceries -- conveniently without having to risk in-store exposure to the deadly virus.

We're not tackling the traditional shopping list of clothing, gym shoes, and backpacks. No matter what it is that we will be buying this season, there's a good chance it will be done through Amazon's digital storefront.

This past springtime semester took us by surprise. Kids cobbled together whatever they had to get online, but they have likely spent the summer getting ready with the right accessories to stand out. Logitech is a maker of accessories.

"Back to School: Evolved," is the message that greets visitors to Logitech's homepage, and it's easy to see why. Logitech is a leading maker of PC accessories that make virtual classes easier. We're talking about wireless mouse controllers, tablet keyboards, webcams, speakers, and headsets.

Growth was ho-hum before the pandemic. Logitech entered 2020 with six consecutive quarters of single-digit growth. We've seen that pick up the pace, with revenue rising 14% in the first quarter and 23% in the second quarter. With virtual classrooms and workplaces on the rise it's not too late to hop on Logitech.

An online furniture retailer may be the least likely back-to-school winner on this list, but it's easy when you frame it -- pun intended -- accordingly. Attending an online class is all about your little square in the larger virtual classroom. Your frame is your fashion statement, and that's where Wayfair comes into play.

Wayfair is already one of the hottest stocks since the pandemic sell-off bottomed out in mid-March. Growth is on a tear, soaring 84% in its latest quarter. Whether it's a cozy desk, comfortable chair, or the surrounding accent pieces to make a Zoom room complete, Wayfair is rising above this back-to-school shopping season.

The bullish cases for Zoom, Amazon, Logitech, and Wayfair stem beyond shopping for the new school year. They're just flat-out great growth stocks with accelerating top-line gains through the pandemic. However, they're more than too cool for school right now. They should be voted the most likely to succeed.