Please ensure Javascript is enabled for purposes of website accessibility
Log In Help Join The Motley Fool
Free Article Join Over 1 Million Premium Members And Get More In-Depth Stock Guidance and Research
By John Ballard – Aug 27, 2020 at 7:01AM

These four gaming leaders could deliver big gains over the next 10 years.

The interactive entertainment industry has been steadily growing in recent years, but new advancements in technology, particularly on mobile devices, should propel game sales over the next decade.

Here are four top gaming stocks that have legions of players and top gaming brands that should lead to market-beating returns.

Zynga (ZNGA) is one of the top mobile game companies in a $77 billion market. Mobile games now make up about half of annual video game sales, but as graphics technology catches up with consoles and desktop PCs, mobile gaming will surely see a lot more growth over the next decade. 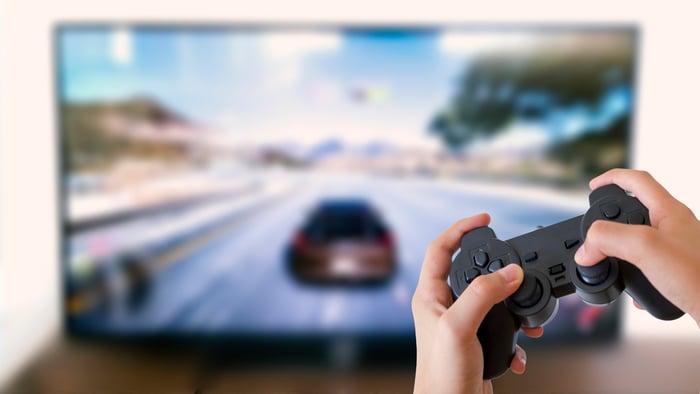 Zynga owns several popular franchises, including Empires & Puzzles and Words With Friends, and ended the last quarter with 22 million daily active users across all titles. The pandemic accelerated engagement in its games, contributing to a 47% year-over-year increase in revenue in the second quarter.

The stock has delivered market-beating returns to investors over the last five years. Zynga has opportunities to continue growing by acquiring other top mobile studios around the world, expanding both its player base and international reach. The recent $1.8 billion deal to buy Istanbul-based Peak will bring an additional 12 million daily active users that Zynga can monetize with advertising or virtual items sold in-game.

With only $1.6 billion in trailing-12-month revenue, Zynga has got plenty of headroom to grow. The stock has the makings of a multibagger for investors who can hold for at least 10 years.

2. The classic gaming brand is killing it

Nintendo (NTDOY 0.87%) has delighted players for more than 30 years with its franchises like Zelda and Mario Bros. Its classic console game systems have become collectors' items for diehard fans, but the Nintendo Switch may become the all-time best-selling Nintendo console.

The Switch has been in high demand since the pandemic started, and has sold a cumulative 61.44 million units since launching in 2017. Nintendo's sales in the most recent quarter across hardware and software more than doubled over the year-ago quarter, partly driven by the March release of Animal Crossing: New Horizons, which has sold a staggering 22.4 million copies so far.

But what investors should pay attention to is the growth happening in digital sales. More players are choosing to download their games directly on Switch as opposed to buying physical copies, and this is beneficial to the company's profits. Digital sales totaled 55.6% of Nintendo's software sales in the fiscal first quarter. The higher margins from digital sales caused Nintendo's operating profit to jump 427% year over year in the recent quarter.

Surging profits is a large reason why the stock is hitting new highs. As management continues to grow its audience for its gaming brands and expand the installed base for Switch, the stock should continue climbing over time.

With total sales of video games expected to hit $159 billion this year, up 9% over 2019, according to Newzoo, investors should consider buying shares of Activision Blizzard (ATVI 0.71%) or Take-Two Interactive (TTWO 0.30%). These companies own some of the most widely played games in the industry. Activision's Call of Duty franchise was the No. 1 best-selling console title over the last decade, while Take-Two's Grand Theft Auto V and Red Dead Redemption 2 are not short of players either, having sold a combined 167 million units.

Activision Blizzard is the old reliable in this race. CEO Bobby Kotick has led the company since 1991, delivering big returns to investors. Over the last 30 years, Kotick has assembled an impressive roster of franchises across all platforms that have a combined 428 million monthly active users.

Take-Two is coming on strong. It generates about half the sales of Activision, with $3.38 billion in trailing-12-month revenue. But it's got dozens of new games under development, so there's plenty of growth in store to send the stock higher from current levels.

Take-Two's stock price has already outperformed its peers over the last five years, delivering a 525% gain, but that may be the tip of the iceberg when it's all said and done. 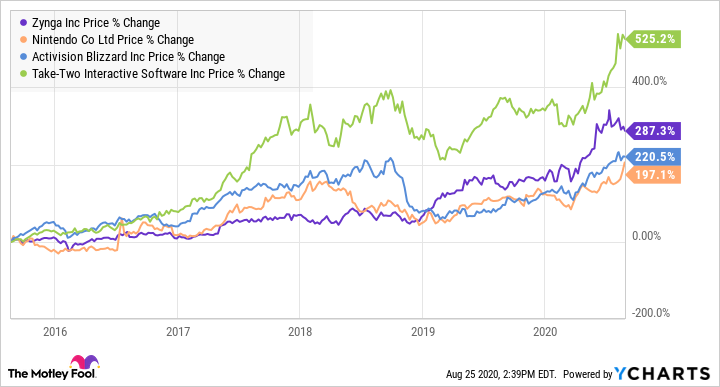 All of these gaming stocks have delivered solid operating results, and that's reflected in their stock performance. With dedicated player bases that provide plenty of monetization opportunities across mobile, console, and PC, as well as emerging opportunities in esports, they all have a long potential growth pathway ahead.