After clearing a regulatory hurdle, the tech giant inches closer to a groundbreaking innovation.

The Federal Aviation Administration issued the tech giant a Part 135 air carrier certificate, joining Alphabet's Wing and UPS, which have also earned the certificate. Amazon plans to continue testing the technology before delivering packages via drone.

In 2013, CEO Jeff Bezos famously went on "60 Minutes" and showed a video of a Prime Air drone successfully delivering a package, and predicted that drone delivery would be standard within five years. That, of course, hasn't come to pass, as the project has been bogged down in a bureaucracy that doesn't have a template for regulating unmanned aerial vehicles. Still, delivery drones are likely to become a reality at some point, as they offer a number of advantages over traditional delivery. Not only are they much faster, as Amazon aims to make drone deliveries within 30 minutes, but they also have advantages for communities around them by eliminating traffic and fossil fuel emissions.

While the speed and convenience of drone delivery is a benefit for Amazon customers and an advantage for the company, Amazon could also derive huge savings on the cost side if drone deliveries become a reality. 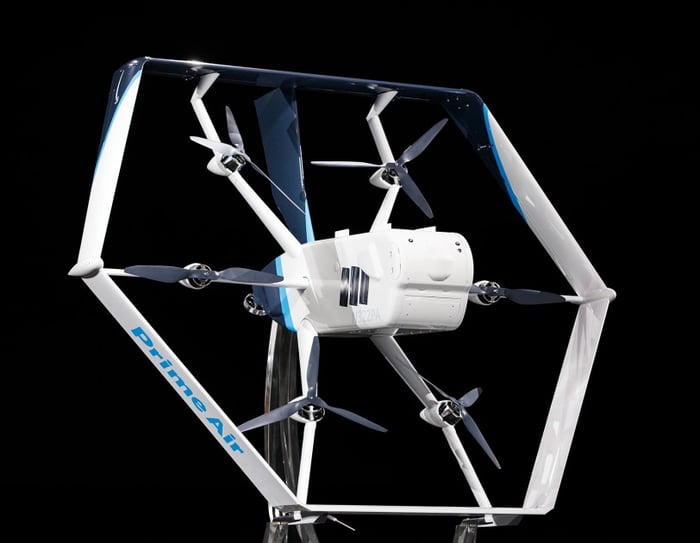 Amazon has spent $47 billion on shipping costs over the last four quarters, and shipping costs have historically grown faster than revenue. The company's promise of free one-day shipping to Prime members doesn't come cheap, and Amazon has invested heavily into its own delivery infrastructure, in addition to what it pays UPS, FedEx, and the Postal Service, among others, for package delivery. Though its shipping costs are wide-ranging, including inbound receiving, returns, and sorting, they also include basics like vehicles, drivers, and fuel, which would be eliminated with drones.

In fact, reducing shipping costs has long been a strategic goal of the company. In its recent 10-Q filing, the company said, "We seek to mitigate costs of shipping over time in part through achieving higher sales volumes, optimizing our fulfillment network, negotiating better terms with our suppliers, and achieving better operating efficiencies. We believe that offering low prices to our customers is fundamental to our future success, and one way we offer lower prices is through shipping offers."

Any cost savings Amazon might achieve from drone deliveries would be passed back straight to its customers in the form of lower prices, more Prime benefits, or other savings, thereby creating another one of its virtuous cycles.

Why Amazon will win the drone wars

Amazon controls nearly half of all of e-commerce sales in the U.S., and after 43% revenue growth in North American e-commerce in the second quarter, the company shows no signs of giving up market share. While Alphabet and UPS have already received the Part 135 certification from the FAA and other companies are aiming for drone delivery as well, no company stands to benefit more from it than Amazon.

The e-commerce giant says that its hexagonal electronic drones, known as MK27s, can provide deliveries in a range of 7.5 miles, and carry packages weighing up to five pounds, accounting for 85% of the company's orders.

If drone delivery becomes a reality, it would likely decimate brick-and-mortar retailers, many of which are already getting crushed by the pandemic. Getting, say, drug prescriptions delivered by drone would likely become standard, and since Amazon doesn't have a substantial brick-and-mortar business, the company has much less to lose from drone delivery than rivals like Walmart.

Jeff Bezos famously said it was easier to build a business on what wouldn't change in the future than on what would, adding that customers would always want things like lower prices and faster delivery. Drone delivery, if and when it becomes a reality, has the power to give customers both.