Please ensure Javascript is enabled for purposes of website accessibility
Log In Help Join The Motley Fool
Free Article Join Over 1 Million Premium Members And Get More In-Depth Stock Guidance and Research
By Adam Levine-Weinberg – Sep 6, 2020 at 9:05AM

J.P. Morgan analyst Stephen Tusa has been the biggest General Electric (GE 0.22%) bear on Wall Street in recent years. He foresaw many of GE's stumbles, repeatedly urging the bank's clients to sell GE stock. As his predictions came true, Tusa garnered wide recognition from investors, and his analyst notes began to cause big swings in GE's share price.

Last week, Tusa became even more bearish about General Electric. He already had the lowest price target on Wall Street at $5, but he withdrew that target on Monday, saying that he felt even more negative about GE stock now. In fact, Tusa suggested that the company's equity might be worthless.

At the beginning of 2020, GE's turnaround seemed to be gaining steam. The industrial conglomerate's initial guidance for the year called for low-single-digit organic revenue growth, modest margin expansion, and between $2 billion and $4 billion of industrial free cash flow, despite the sale of its highly profitable biopharma unit in March. As a result, GE stock rose to a 52-week high of $13.26 in February: roughly double the low reached in late 2018. 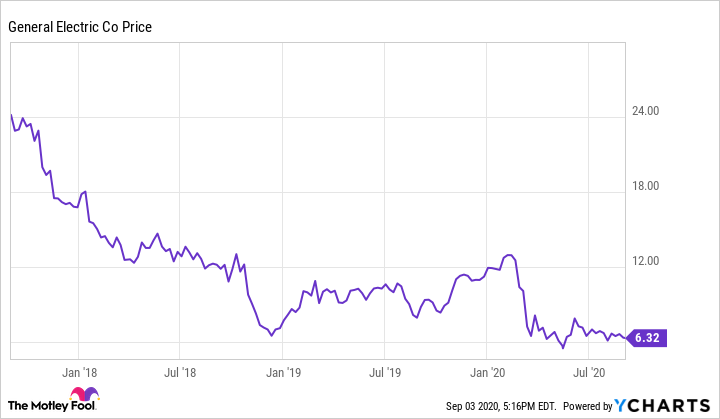 However, COVID-19 has crushed GE's results this year. The pandemic undermined power demand, caused people to postpone medical procedures, and battered the commercial aviation industry. The steep aviation downturn has been particularly painful. GE Aviation is usually the company's biggest cash cow, but last quarter, the segment's revenue plunged 44% year over year, despite growth on the military side of the business. For the first half of the year, GE logged an adjusted loss of $0.10 per share and burned $4.3 billion of cash.

In his note last week, Tusa warned that other analysts and investors may be underestimating the near-term headwinds facing General Electric. He expects breakeven free cash flow in the second half of 2020, whereas most analysts are modeling a return to positive free cash flow in what is typically a seasonally stronger period for GE. Tusa sees GE's lack of guidance for the second half as a warning signal in this regard.

Looking further ahead, Tusa opined that GE's earnings power may not return to normal until 2024. Similarly, he believes that free cash flow is likely to remain well below what the rest of Wall Street expects over the next year or two. Given that the company still has substantial debt and pension liabilities, these dire earnings and cash flow projections imply that GE stock may be worth little or nothing. Tusa's accurate predictions a few years ago have made him very influential. However, investors may be overrating his prescience. After all, Tusa remained bearish on GE stock well after the share price bottomed out in late 2018. Six months ago -- just days before the pandemic truly spiraled out of control in the U.S. and Europe -- Tusa upgraded GE, saying that he had been wrong about the company's free cash flow outlook.

To put it in stark terms, a broken clock is still right twice a day. Tusa has been a GE bear for years, notwithstanding two brief upgrades of GE stock to a neutral rating. When GE was struggling under its previous management teams, he seemed like a genius. Conversely, as GE's turnaround gained traction last year, his predictions started to miss the mark by a mile, as Tusa himself admitted in March.

The COVID-19 pandemic has given Tusa a new rationale to be bearish about GE. However, while the company undoubtedly faces big headwinds in the short term, Tusa again appears to be underestimating its recovery prospects.

GE could recover sooner than you think

In the short run, the pandemic will keep a tight lid on General Electric's earnings and cash flow. However, with multiple vaccine candidates in Phase 3 trials and public health officials pushing hard to make vaccines widely available in 2021, GE is positioned for a strong recovery in the years ahead.

As the pandemic comes more under control, power projects that have been delayed due to virus concerns are likely to go forward. Medical procedure volumes should bounce back, and hospitals that have been 100% focused on treating COVID-19 cases will start purchasing new equipment again. Most importantly, airlines will begin to ramp up their flight schedules, driving a rebound in high-margin services revenue for GE Aviation.

Between an improving macro environment and GE's ongoing cost-cutting efforts, profit and cash flow may surpass 2019 levels as soon as 2022, with strong growth in the years thereafter. That could drive GE stock back to its early 2020 high and beyond over the next several years.