Dunkin' is focused on better locations, better sales, and digital marketing, will the shares perk up in response?

During the worst of the pandemic, Free Donut Fridays from Dunkin' Brands Group (DNKN) became one of the rare reasons to venture outside. Customers discovered they could snag a free donut with the purchase of a regular-priced drink thanks largely to the Dunkin' Mobile App. The coffee company that keeps America running is investing in its digital future, and investors seeking to brew up strong returns should consider sampling its shares.

The pandemic has pulled forward certain trends that were already on Dunkin' Brands' radar. The company has offered mobile ordering and its Perks program for many years, but the benefits have bubbled up to the surface over the last several months.

Under constant stress about COVID-19, customers are increasingly aware of staying socially distant for their own safety. But customers who download the Dunkin' app can order their favorite food or beverage before arriving at the store . Members can pay through the app ahead of time, or at the time of purchase, using a QR code. In the past, this might have been a convenience, but in light of the pandemic, touchless payment options have increased in popularity. 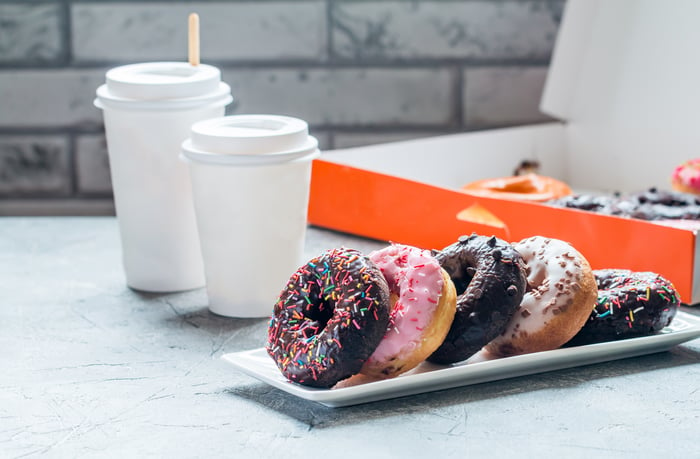 On Dunkin's Q2 2020 earnings call, Scott Murphy, President Dunkin' Americas, said, "Perks active enrollment increased by nearly 110%," compared to last year. While it is possible to use the app and check out as a guest, the app tends to nudge users toward Perks membership, which offers advantages aside from touchless payments. Membership means earning points toward a periodic free beverage. In addition, customers can save their favorite stores and favorite orders, and receive custom offers and discounts. The benefits of the Perks program seem to resonate with the Dunkin' faithful. That 110% growth in the most recent quarter compared to a relatively small 38% annual growth in membership in Q4 2019.

With each member who orders through the Dunkin' app, the company gets valuable information about locations visited, popular menu items, and in theory, more sales in the long run. According to Harvard Business Review, "a company's most loyal customers are also its most profitable." Loyaltylion.com suggests loyalty program customers spend an average of 67% more than new customers.

In addition, a Brand Keys study found that Dunkin' was the No. 1 brand for customer loyalty in the out-of-home coffee category. In the study, Dunkin' customers appreciated its continued menu innovation -- and the app allows non-Perks customers to see and admire all those new menu items without first having to visit a Dunkin' store. The company also expanded the loyalty program to allow members to earn points for all purchases, rather than requiring a minimum dollar amount.

The Perks program seems to have a potent influence on members' spending. Back in Q4 2014, the company disclosed that members spent 40% more on average per week, and visited 30% more often, compared to the prior year. That effect doesn't seem to have waned over time; in Q2 2019, Dunkin' noted that average weekly sales from mobile orders had increased by 30% year over year. And since Dunkin' estimates that employees spend about 30% of their time taking customers' orders, the speed and efficiency gains from increased mobile ordering could make those employees more productive -- and more profitable. The powerful combination of faster sales growth from Perks members and a more efficient operation from digital orders could help drive sales and decrease expenses over the long run.

In short, Dunkin' has loyal customers, these customers traditionally spend more, and the pandemic -- with its frequent boredom and ample reasons for people to seek a pick-me-up -- is pulling more people into the Perks program. The company hopes to continuing the virtuous cycle of introducing customers to the app, showing them what Perks offers, and enticing them to become Perks members with rewards and special offers.

To drive its digital business into the future, Dunkin' created the position of Chief Digital and Strategy Officer, and hired company newcomer Phil Auerbach to fill this role. He has a long history of marketing and sales experience, along with nearly 15 years in management consulting with McKinsey & Company. At the consulting firm, he co-launched the company's Loyalty service, focused in part on the hospitality industry.

A growth and income story that could perk up

A good consultant seeks to emulate business practices from other successful companies. In his new role, Auerbach may decide to look at other coffee companies to determine how Dunkin' can keep up its digital momentum.

In Dunkin's most recent quarter, the company generated 18% of sales from digital orders. By point of comparison, in Starbucks's (NASDAQ: SBUX) Q3 2020 earnings call, Kevin Johnson, CEO, reported that Rewards orders as a percentage of revenue reached 46%. If Starbucks can generate nearly half of its sales from loyalty members, Dunkin' still has a significant opportunity of its own to expand Perks membership.

Over the remainder of 2020, Dunkin' will be dealing with a headwind of closing approximately 800 domestic locations -- about 8% of its total U.S. stores. Fortunately, these locations represent just 2% of the company's 2019 total sales. Dunkin' plans to grow its store count over time, focusing on its next-generation restaurant concept with drive-thru service as a key element. In fact, Dunkin's Steve Murphy mentioned that in Q2 2020, drive-thru locations performed four times better than those without it.

Dunkin' has beaten EPS estimates each of the last four quarters, and analysts' predictions for its full-year 2020 and 2021 have increased over the last 90 days. If we compare the "projected" 4.4% five-year EPS growth analysts expect according to Yahoo Finance, compared to the "improved" 6.4% EPS growth that the aforementioned 2% increase would provide, we get a sense of what Dunkin's earnings might look like over the next several years. 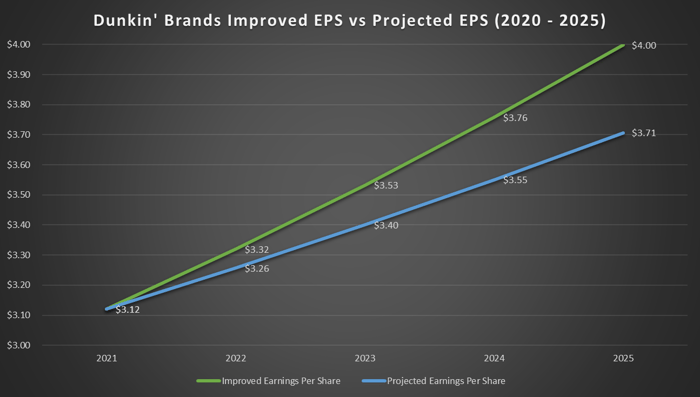 With Dunkin' reinstating its dividend even as it doubles down on digital operations, the stock could become a growth and income story once again. Long-term investors should consider whether Dunkin' could perk up their portfolio.