Please ensure Javascript is enabled for purposes of website accessibility
Log In Help Join The Motley Fool
Free Article Join Over 1 Million Premium Members And Get More In-Depth Stock Guidance and Research
By John Rosevear - Sep 10, 2020 at 11:24AM

The top-of-the-line Lucid Air will have over 1,000 horsepower when it ships next spring.

Lucid Motors said that its Air sedan will be offered with over 1,000 horsepower and range of more than 500 miles when it goes into production in Arizona next spring.

The company revealed the production version of the Air, which made its debut as a show car in 2016, last night.

The electric-vehicle start-up, led by former Tesla (TSLA -6.63%) Model S engineer Peter Rawlinson, said that the Air "seeks to set new standards for sustainable transportation" with an innovative architecture and new technologies including exceptionally fast recharging -- but Lucid's customers will have to pay up for the privilege. 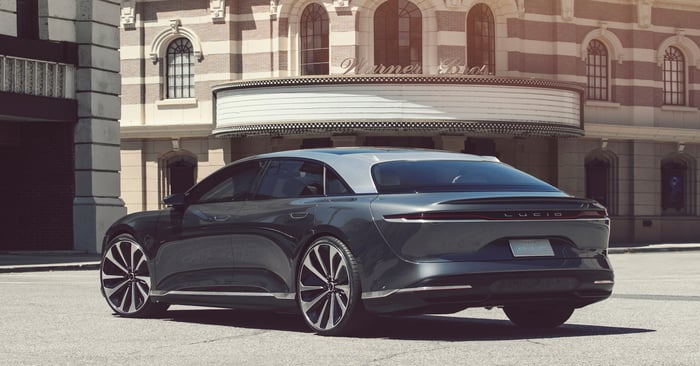 The Lucid Air will be offered with up to 1,080 horsepower and range of over 500 miles. Deliveries will begin in the spring of 2021, Lucid said. Image source: Lucid Motors.

Lucid said that the Air will be offered in four trim levels, with a starting price below $80,000 before tax credits -- eventually. But the first examples will be priced quite a bit higher:

All will have Lucid's fast-charging-ready battery pack, developed with lessons learned from Lucid's involvement in the Formula E electric-vehicle racing series. Lucid said that its battery pack can charge at rates of up to 20 miles per minute when connected to a DC Fast recharger, or 300 miles in just 20 minutes.

All versions of the Air will be built in the company's new factory in Casa Grande, Arizona.