The slow-and-steady approach utilized by these companies could win the AR race.

There's no shortage of technology companies that are dabbling in augmented reality (AR). Chip makers, social media companies, tech giants, and small start-ups are all betting that AR could be a step change for computing platforms.

But AR is still in its early stages, which means that investing in augmented reality stocks is for patient investors who are looking to play the long game. And that's why Apple (AAPL -2.27%) and Microsoft (MSFT -0.82%) should be at the top of your list of AR stocks. These two tech companies are already taking on AR in their own unique ways, and each has the resources and long-term perspective to be an AR winner. 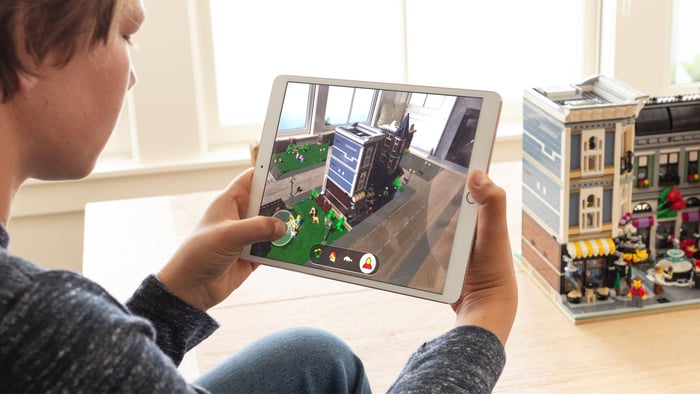 As one of the largest technology companies in the world, it should come as no surprise that Apple is on this list. The company has been slowly but steadily integrating more augmented reality capabilities into iOS since it launched ARKit back in 2017.

Apple CEO Tim Cook has said that AR will "pervade" our lives, and he believes the technology could end up being as big and important as smartphones themselves. Cook said in a 2017 interview with The Independent that,

I regard it as a big idea, like the smartphone. The smartphone is for everyone, we don't have to think the iPhone is about a certain demographic, or country or vertical market: it's for everyone. I think AR is that big, it's huge.

Since then, Apple has made ongoing purchases of smaller tech companies in this space, and continued to build upon its original ARKit. Additionally, there have been numerous rumors that Apple is developing its own augmented reality glasses, which could debut in 2023, as well as an AR/VR headset that might launch as soon as 2022.

But even if Apple doesn't launch a stand-alone AR device, the integration of AR into the company's iPhone and iPad software makes Apple one the biggest AR platforms in the world. The company recently highlighted its AR focus when it launched its latest iPad in the second quarter with a new LIDAR (light detection and ranging scanner). Apple's CFO, Luca Maestri, said the LIDAR scanner allows for "some really exciting augmented reality applications."

Additionally, Apple is reportedly working on augmented reality content for its AppleTV+ streaming service for next year. When you add all this together, Apple looks like one of the best all-around bets on AR. 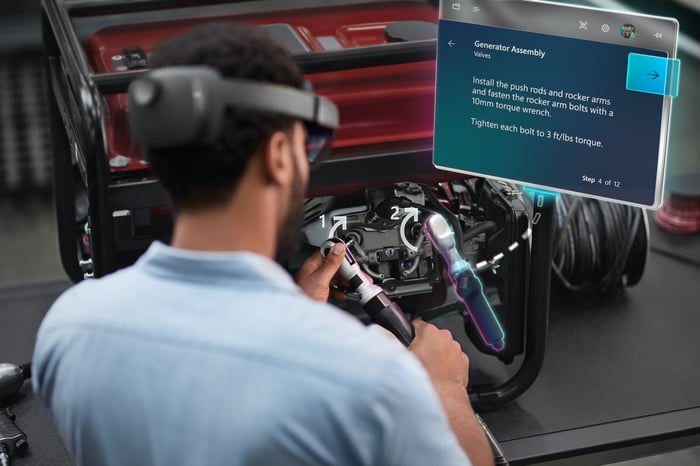 Microsoft has been an early leader in the AR space ever since the company debuted its HoloLens back in 2016. Since its launch, Microsoft has marketed the HoloLens as an enterprise device designed to help companies create new ways to view everything from medical procedures to industrial equipment repairs.

Microsoft proved last year that it's still committed to helping companies transition to an AR world when it launched its HoloLens 2. The second iteration of the device comes in at a hefty price tag of $3,500, but this device isn't meant for consumers. Microsoft understands that enterprise applications could be one of the fastest-growing segments of AR in the coming years.

The company's focus on AR makes sense when investors consider that Microsoft's Windows operating system is still the go-to platform for enterprise applications. As AR grows in the coming years, Microsoft could easily integrate more AR capabilities into its software, making HoloLens a natural extension of Microsoft software.

Microsoft is making a long-term bet on augmented reality, so investors shouldn't expect any AR-specific revenue from the company in the short term. But with AR/VR market estimated to grow from $22 billion this year to $161 billion by 2025, Microsoft is making sure it's getting a head start in this fast-growing market.