Please ensure Javascript is enabled for purposes of website accessibility
Log In Help Join The Motley Fool
Free Article Join Over 1 Million Premium Members And Get More In-Depth Stock Guidance and Research
By Will Healy – Sep 15, 2020 at 7:16AM

This is not purely a question of 5G.

Could this finally be AT&T's (T -2.12%) time? The telecom giant has spent several years and tens of billions of dollars to build a nationwide 5G network. Now, the move by major smartphone manufacturers to start selling 5G-compatible phones will more than likely increase 5G demand.

However, long-term holders have seen little in the way of non-dividend gains in this telecom stock in decades. Consequently, the company could need more than the tremendous potential of 5G to overcome this hurdle. Let's take a closer look to see where AT&T stock stands.

The current century has not treated AT&T stock kindly. At about $29 per share, the stock sells at levels first seen in 1995! Now, 20 years after the dot-com bubble burst, it trades at approximately half its peak during that boom. 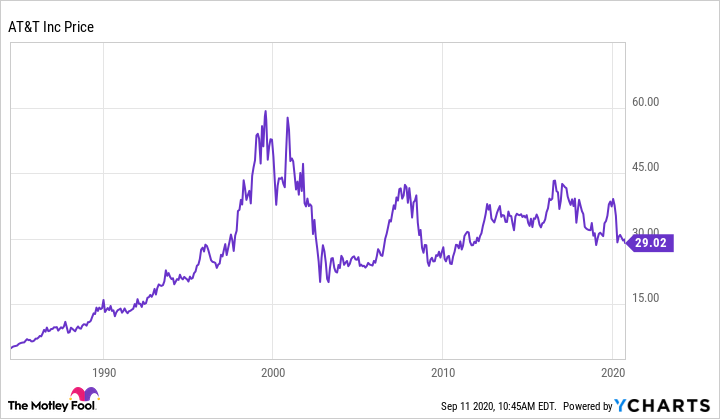 So what happened? In 1995, the company derived most of its income from local monopolies in the landline business. However, since that time, AT&T has had to spend billions every year to keep up with the various changes in wireless and internet technology over the last quarter-century.

The 5G buildout, as well as investments such as DirecTV and WarnerMedia, have contributed to a long-term debt load of more than $153 billion. This is a considerable burden for a company worth about $193 billion in stockholders' equity, the amount left after subtracting liabilities from assets.

It has also had to compete to retain its wireless and internet customers, especially with Verizon and T-Mobile.

Still, due to the massive cost of building a nationwide 5G network, the three companies have now become an oligopoly. Also, despite its WarnerMedia and DirecTV assets, 5G will likely become the main driver of AT&T stock for the foreseeable future.

Will 5G put AT&T stock on a growth path?

One question regarding this oligopoly is whether the price wars of the 3G and 4G eras will continue. The good news for AT&T is that this is less likely. T-Mobile, who drove much of the price competition, has also had to spend tens of billions of dollars to build its own 5G network and acquire Sprint. This leaves less room for T-Mobile or Verizon to draw customers away with lower prices.

Moreover, 5G will take wireless speeds as high as 300 megabytes per second (Mbps), up from between 12 and 36 Mbps during the 4G era.

We already know 5G will enhance technologies such as artificial intelligence, virtual reality, and The Internet of Things. However, few predicted that the technology of the Apple iPhone would later spawn companies like Uber. In the same way, we do not know what technologies 5G will make possible. Still, none of this functionality is possible in the U.S. without turning to one of the three 5G providers. Hence, we can assume that such innovations will probably benefit AT&T. 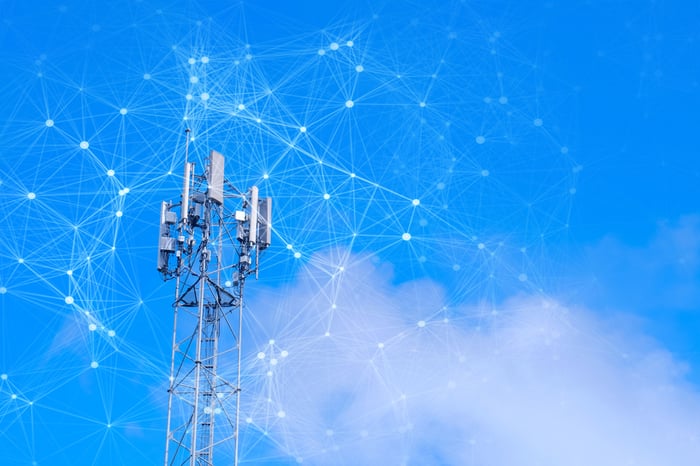 Furthermore, even if 5G is a relative disappointment, AT&T stock should remain attractive to a specific class of investors. Thanks to a 35-year streak of dividend increases, AT&T's annual payout of $2.08 per share yields about 7%.

Also, it can afford this payout as well as subsequent hikes. In the most recent quarter, AT&T generated about $7.59 billion in free cash flow, more than enough to cover the $3.74 billion in quarterly dividend costs. To ensure it could continue the dividend, AT&T also halted share buybacks and borrowed additional funds earlier this year.

Moreover, the forward P/E ratio stands at around nine. Still, net income fell in the most recent quarter, and next year's forecasted income growth is 1.3%. This slow growth may negate any benefit of a low valuation.

Those profits could rise as 5G increases the demand for broadband. Also, with a high dividend yield set to rise further, the payout itself may become too generous for income-oriented investors to ignore.

AT&T may not look appealing from a growth perspective. Nonetheless, with its massive, growing dividend yield and its 5G potential, it would be quite surprising if this stock does not trade significantly higher five years from now.