How much higher can Tesla (NASDAQ:TSLA) go? The answer depends on the answer to another question: How much can Tesla grow?

To be sure, the company has to deliver a tremendous amount of growth to justify its current valuation. Tesla bulls think it will do just that given the potential of the company's self-driving car technology and its energy business, as well as its opportunities from the rising adoption of electric vehicles.

Maybe Tesla will generate sizzling growth for years to come. However, I think there are three great stocks to buy right now that have better growth prospects than Tesla. 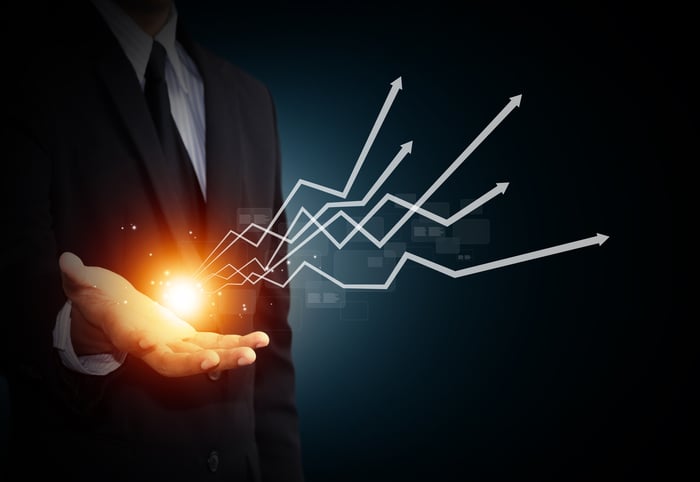 Guardant Health (NASDAQ:GH) stands out as a pioneer in the liquid biopsy market. What is a liquid biopsy? It's a way of detecting the presence of cancer by finding fragments of DNA broken off from tumor cells in an individual's blood.

While Guardant Health isn't the only company targeting the big liquid biopsy market, it has less intense competition than Tesla does in its market. Guardant has also built an early lead. It already has two liquid biopsy products on the market. The company's Guardant360 product is used by more than 7,000 oncologists and over 60 drugmakers. It was also the first comprehensive liquid biopsy to win Food and Drug Administration approval.

Tesla's trailing-12-month sales have soared nearly 140% over the last three years, but Guardant Health's two products have fueled sales growth twice that level in less time. The company's Lunar liquid biopsy tests, which are in clinical testing, should boost its growth significantly within the next few years.

You might be surprised that a real estate investment trust (REIT) could have better growth prospects than sizzling-hot Tesla -- but Innovative Industrial Properties (NYSE:IIPR) isn't just any REIT. The company ranks as the leading provider of real estate capital to the U.S. medical cannabis market.

IIP currently owns 62 properties in 16 states, all of which are leased to medical cannabis operators. By comparison, the company had only 46 properties at the end of 2019. IIP's steady property acquisitions have driven its trailing-12-month revenue a whopping 1,600% higher over the last three years.

It shouldn't be overly difficult for IIP to keep its growth streak going. The company has ample opportunities to expand in the states where it currently operates, as well as the other 17 states where medical cannabis is already legal. Even more states are voting in November to potentially legalize cannabis.

While Tesla has trounced IIP in terms of stock performance so far this year, it's a different story over the last three years. IIP also provides another goodie for investors: its dividend. As an REIT, the company must return at least 90% of taxable income to shareholders in the form of dividends. IIP's dividend yield currently stands at close to 3.5%.

MongoDB (NASDAQ:MDB) is another growth stock that has outperformed Tesla over the last three years and could extend its dominance over the next decade. The company's cloud database platform has proven to be especially popular with customers.

At first glance, MongoDB might seem to have a daunting challenge competing against database heavyweights such as Microsoft and Oracle. However, unlike these large rivals, MongoDB's database was built from the ground up to handle the kinds of unstructured data that's prevalent today. It was also designed to run anywhere, including the cloud.

The company's primary growth driver is its Atlas fully managed database service. With Atlas, customers can quickly scale up databases in the cloud and expand as needed with minimal hassle. Both small and big organizations have flocked to MongoDB's cloud platform, including technology leaders such as Adobe and Google.

MongoDB CEO Dev Ittycheria said in the company's second-quarter conference call earlier this month that MongoDB will "continue disrupting one of the largest markets in software." This sustained disruption should enable MongoDB to keep its remarkable growth story going for a long time to come.