Please ensure Javascript is enabled for purposes of website accessibility
Log In Help Join The Motley Fool
Free Article Join Over 1 Million Premium Members And Get More In-Depth Stock Guidance and Research
By Adam Levine-Weinberg – Sep 16, 2020 at 8:22AM

General Electric (GE 0.31%) shareholders are certainly used to disappointment. GE stock plunged from around $30 at the beginning of 2017 to less than $7 by December 2018, due to a series of terrible acquisitions, operational miscues, weak conditions in the power and oil-and-gas markets, and huge losses in GE's legacy insurance operations.

However, General Electric seemed to find its footing after new CEO Larry Culp took over in late 2018. As a result, GE stock doubled between December 2018 and February 2020, when it peaked above $13. Unfortunately, the COVID-19 pandemic undermined GE's biggest cash cow -- its aviation business -- causing the stock to crash to new multidecade lows below $6. 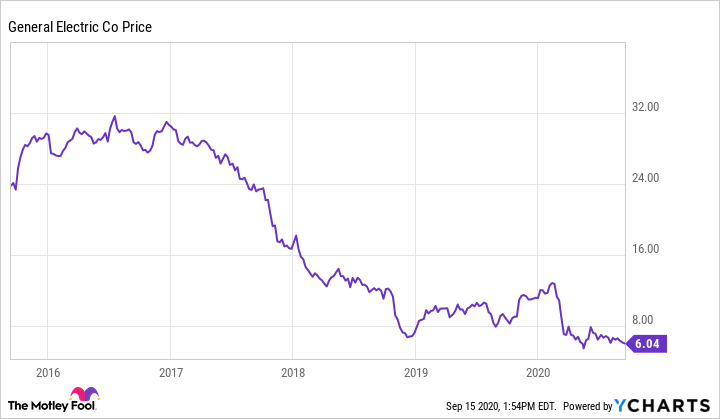 Most of the stock market has fully recovered from the coronavirus-inspired sell-off, but GE shares have barely budged in recent months. Yet there's good evidence that Mr. Market is overreacting to the short-term headwinds facing the industrial conglomerate. That's why I bought more GE stock last week.

Risk from debt, pensions, and insurance liabilities is receding

One of Culp's top priorities after becoming CEO two years ago was to fix GE's balance sheet. He has already nearly finished the job. A series of asset sales -- most notably the $21 billion sale of GE's biopharma unit earlier this year -- have raised tens of billions of dollars. That helped GE reduce its debt by $22 billion between the beginning of 2019 and the middle of 2020, while also boosting its cash balance by about $10 billion.

Under generally accepted accounting principles (GAAP), GE ended last quarter with $81.9 billion of borrowings, down from $134.6 billion at the end of 2017. Most of its current borrowings are fully offset by cash on hand and earning assets held at its GE Capital finance subsidiary. Thus, debt itself should no longer be a major concern for GE shareholders.

General Electric does have substantial pension liabilities. At the end of 2019, GE's pension plans had $94.7 billion of liabilities, offset by $71.8 billion of assets, leaving a deficit of $22.9 billion. However, this deficit isn't as scary as it seems. The $94.7 billion liability figure is calculated with a rock-bottom discount rate of about 3%. To the extent that GE's pension assets generate higher returns -- which they have, historically -- the company would never have to contribute the full $22.9 billion in cash. Another long-running balance sheet risk stemming from GE's long-term care insurance liabilities may be receding, too. GE has seen a reduction in new long-term care claims and an uptick in policy terminations this year. The devastating impact of COVID-19 on long-term care facilities appears to be changing many people's plans with respect to long-term care, reducing the risk that GE would need to set aside more reserves than it currently plans.

GE Aviation can recover faster than many think

From a business perspective, the performance of GE Aviation is the biggest variable impacting the value of GE stock. Right now, the business is really hurting. Last quarter, segment revenue plunged 44% year over year to $4.4 billion and GE Aviation lost $680 million, compared to an operating profit of $1.4 billion a year earlier. The segment's results are likely to remain dismal for a few more quarters.

However, the largest portion of GE Aviation's revenue ($15.2 billion in 2019) comes from commercial services related to engine maintenance. Engine maintenance isn't optional, so this is typically a reliable revenue stream. At present, airlines around the world have grounded thousands of planes due to weak demand, so they have been able to defer maintenance spending. Once air travel rebounds to around 90% of 2019 levels -- which seems likely to occur by 2022 -- GE's services revenue should bounce back.

Commercial engine sales totaled $9 billion last year. This part of the business won't recover so quickly. Indeed, commercial engine sales could easily be just $5 billion in 2022. But the engines themselves are sold around breakeven: the profit is in servicing the engines later. GE Aviation has implemented big cost cuts, which should mitigate the impact of lower volume on the profitability of engine production.

GE's military engine business is the other major piece of GE Aviation. This business is on a strong growth trajectory, with revenue expected to soar from $4.4 billion last year to around $8.3 billion by 2025.

Free cash flow will snap back

GE Aviation generated $4.4 billion of free cash flow in 2019. It could get close to that level again by 2022 as services demand recovers, with further growth in the following years.

Meanwhile, General Electric's cost-cutting moves and operational improvements are already starting to take hold in the power and renewable energy units. A more rational competitive environment should bolster earnings and cash flow, too. Those two businesses combined burned through $2.5 billion last year. By 2022, they could be producing positive free cash flow.

While GE will almost certainly burn cash in 2021, a recovery at GE Aviation and a return to modest cash generation in the power and renewables segments could lift free cash flow to $5 billion or more by 2022, with room for double-digit annual free-cash-flow growth for several years thereafter. That makes GE stock look severely undervalued based on its recent trading price of $6 -- which puts the company's market cap at just $53 billion.