These stocks have all the ingredients retirees want.

What's the recipe for the perfect stock for retirees? Mix a hefty amount of stability with a generous heap of dividends. Then add at least a pinch of growth. Let the concoction simmer, and you should have years of steady income.

But which stocks contain all of these ingredients? Here are three dividend stocks that are perfect for retirees. 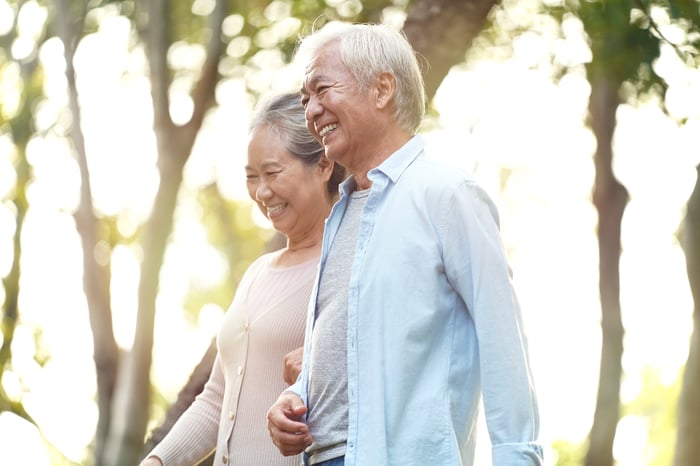 Abbott Laboratories (ABT 0.92%) definitely checks off the box for stability. The company, founded in 1888, has grown to become one of the biggest healthcare companies in the world with nearly $32 billion in revenue last year. Abbott has ranked No. 1 in its industry among Fortune's Most Admired Companies for seven years in a row.

Few healthcare companies offer more diversification than Abbott Labs. Its products include branded generic drugs, diagnostics systems, medical devices, and nutritionals. It ranks as a market leader in all of these businesses.

You also won't find many stocks with a better dividend track record. It belongs to the elite group of stocks known as Dividend Aristocrats, and has paid a dividend every quarter since 1924. And the company has increased its dividend, which currently yields close to 1.4%, for 48 consecutive years.

Renewable energy offers both cost and environmental advantages, and production is definitely high on the list of stable businesses. That's great news for Brookfield Renewable (BEP -0.11%) (BEPC -0.10%), one of the world's top renewable energy companies.

Brookfield operates over 5,300 power-generating facilities with 19,300 megawatts of capacity. These includes hydroelectric, wind, and solar facilities spread across four continents.

Growth shouldn't be a problem for Brookfield Renewable, with the demand for renewable energy rising. In fact, the company has an 18,000 megawatt development pipeline, which is nearly as big as the company's current capacity.

How many companies have survived and thrived for more than 170 years? I suspect very few. But Pfizer (PFE 1.07%) is one of them. The pharmaceutical company began operations in 1849. Pfizer now ranks as the biggest drugmaker in the world based on pharmaceutical revenue.

Pfizer's revenue is more diversified than most drugmakers, as it markets close to 40 key pharmaceutical products. Eight of them generated at least $1 billion in sales last year, but none contributed more than 12% of Pfizer's total revenue.

Investors seeking income have liked Pfizer for a long time. The company's dividend payout has more than doubled over the last decade, with the yield currently above 4%. The dividend payout will decline a little after the planned merger of Pfizer's Upjohn unit with Mylan closes. However, Pfizer should still offer one of the most attractive dividend yields in the healthcare sector.

The good news is that the Upjohn-Mylan merger will boost Pfizer's growth. Older drugs that have lost market share will go with Upjohn into the new entity. That will leave Pfizer with plenty of products with solid growth prospects, including blood thinner Eliquis, as well as a pipeline loaded with promising prospects, such as coronavirus vaccine candidate BNT162b2.