The market's dramatic sell-off from early September has been contained, at least for the time being. But a renewal of that weakness isn't out of the question. Most of the rally between March and this month's high remains intact, leaving the prospect of big-time profit-taking on the table. Anything's still possible.

To that end, a strategic shift to safer, income-oriented names and away from aggressive growth names may not be a bad idea here. Dividend Aristocrats -- companies that have increased their dividend for at least 25 consecutive years -- like Walmart (NYSE:WMT), Automatic Data Processing (NASDAQ:ADP), and Johnson & Johnson (NYSE:JNJ) are a great way to start that defensive shift. Let's take a closer look at these three market crash shields. 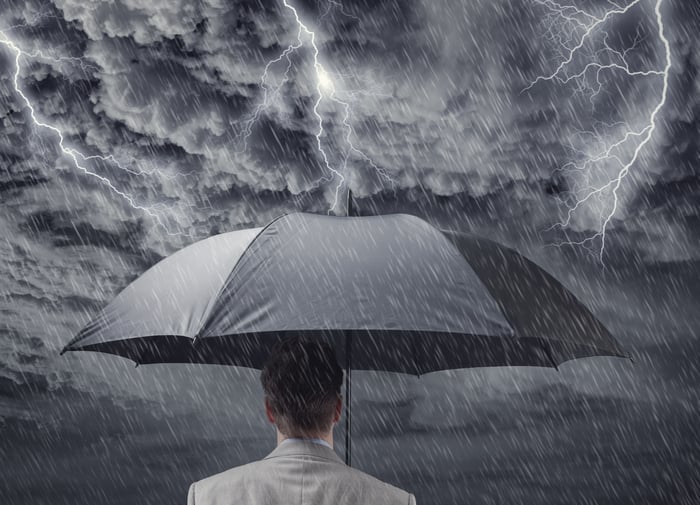 1. Walmart is essential in all environments

It's almost become a cliche to find Walmart on a list of sell-off-resistant stocks, but like most cliches, this one's endured for good reason. Consumers may postpone the purchase of a new car or turn a vacation into a staycation if things get turbulent, but Walmart offers the must-haves in any economic environment. About half of its U.S. revenue comes from the sale of groceries, and the retailer controls about one-fourth of the nation's grocery market. That makes it bigger than Kroger.

Perhaps more relevant here and now is the fact that Walmart leveraged the COVID-19 pandemic well, with nonprofit news organization Marketplace indicating the brick-and-mortar retailer is the go-to choice for half the country's online grocery shoppers. Once consumers are in Walmart's digital ecosystem, it becomes much easier to sell them non-food goods like vacuum cleaners, pharmaceuticals, socks, and kitchen utensils.

And the company just turned up the heat on this idea. A few days ago Walmart+ went live, offering consumers free delivery of online orders (totaling at least $35) at a cost of $98 per year, or $12.95 per month. Fuel discounts and in-store perks are some of the program's other features. Some customers will even enjoy same-day deliveries. All of it helps stabilize Walmart's revenue machine, as consumers tend to stay loyal to stores where they're paying for amenities.

Unlike Walmart, Automatic Data Processing generally isn't included on a list of safe investments. That's a big mistake. This software giant may be an even more reliable revenue producer.

The name doesn't quite explain what the company does. In short, Automatic Data Processing -- formerly known as ADP -- offers corporate human-resources department software that helps them with the complex task of managing employees. It's perhaps best known for being a payroll processor, but the company also supplies time and attendance tools, recruitment tools, and benefits-management solutions. These are functions that lend themselves to being outsourced by HR departments.

The underlying business model lends itself to consistent dividend payments. See, once an organization plugs into Automatic Data Processing's platform, they're likely to stick with the company even if things get tough. Switching to home-grown solutions or even migrating to a competing human-resources management platform can be a pain. This translates into steady, recurring revenue. The second calendar quarter of this year was the first time in years the company reported lower revenue, sequentially or year over year.

ADP's guidance suggests this year's top line will slump between 1% and 4%. While employment and employers are on the mend, April's unemployment rate of 14.7% is a big number to walk back from. Even so, that modest slowdown isn't enough to threaten the company's dividend payout, which is presently yielding 2.7%.

3. Johnson & Johnson is much more than baby shampoo

It may be another cliche but (as was the case with Walmart) that doesn't make Johnson & Johnson the wrong pick to shield yourself from a market crash.

There's more to J&J than it might seem on the surface. Yes, this is the name behind a highly recognizable brand of baby shampoos. The company also owns brands like Neutrogena, Tylenol, Nicorette, Band-Aid, and Listerene, just to name a few of its many consumer goods products. Its consumer arm only makes up a small portion of its total business, though -- about 17% of last year's total revenue of $82 billion. Johnson & Johnson is predominantly a pharmaceuticals player, driving more than $42 billion worth of drug sales in 2019. Its pharma portfolio includes blockbuster names like Remicade, Imbruvica, and Stelara. It's also an interesting prospect right now, in that its experimental formulation Ad26.COV2.S has shown some efficacy as a COVID-19 treatment in early animal trials.

Consumer goods aren't the company's second-biggest business either. That spot goes to medical products, with less familiar brands like DePuy Synthes, Ethicon, Acclarent, and others among its offerings. This arm accounted for more than 30% of last year's sales.

J&J's pharma focus is a critical detail for income investors on the hunt for stable stocks in volatile times. While its consumer-oriented brands and OTC products may fall out of favor from time to time, insurers are typically paying the bills for prescriptions and medical devices. That doesn't change just because the broad market takes a dive, or even if the economy starts to contract.