No matter the investing climate, there are always stocks to buy and hold for a long time. Of course, the opposite also holds true -- you should place certain companies on your list of stocks to avoid under any circumstances. There are a variety of reasons to take this strong step, but it ultimately comes down to a business that is deteriorating and has little chance to improve.

Let's discuss two companies that have this marked distinction. 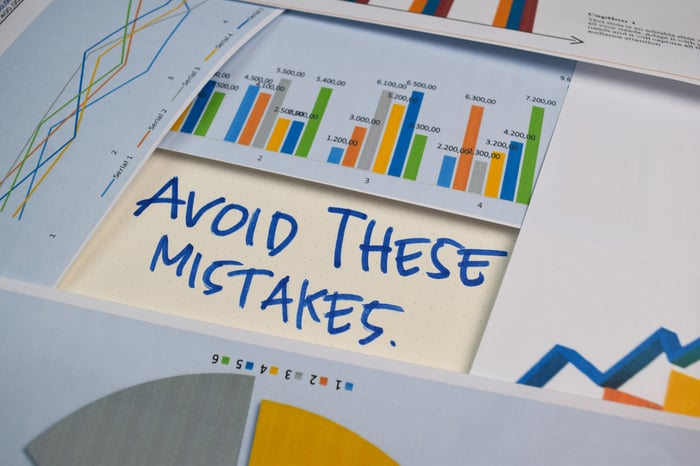 Unsurprisingly, governmental orders that forced its theaters to close devastated AMC Entertainment's (NYSE:AMC) recent results, with its second-quarter revenue plummeting by 99% from $1.5 billion to just $18.9 million. However, there are other underlying factors that will affect the company even as it reopens to the public.

Last year, before the pandemic wreaked havoc on people's health and forced governments to impose social distancing measures, AMC's admission revenue fell by 2.5% to $3.3 billion, partly due to lower attendance. Selling food and beverages helped offset this weakness, but this was due to the company raising prices.

In other words, fewer people have been going to the movies. With COVID-19, this trend accelerated, and movie makers adapted to the climate by releasing movies to premium video on demand (VOD) and streaming services. Most recently, Walt Disney released Mulan to its Disney+ streaming service, where subscribers can view it for $30 over the next three months. After then, it will be free to those who have the service.

Clearly, these aren't positive developments for AMC. The movie operator did just settle a high-profile battle with Comcast's Universal Pictures when the latter was pushing for faster movie releases to VOD platforms. While the two companies hashed out an agreement that shortens AMC's window to show movies exclusively in its theaters, it does provide it with some revenue sharing after it moves to VOD. However, as we've seen with Disney, it is not clear whether other movie production companies will follow suit.

On top of this issue, AMC has a lot of debt. It worked out deals with its lenders over the last several months to avert bankruptcy. This includes last month's deal that lowered its $5.6 billion debt burden by about $550 million. It also recently exchanged $600 million of its convertible note that was due in 2024.

However, if the business does not recover, lenders could run out of patience, leaving AMC shareholders holding the bag.

GameStop's (NYSE:GME) second-quarter same-store sales (comps) fell 12.7%, with COVID-19 causing the company to shut down stores. However, its issues predate the pandemic.

In fiscal 2018 and 2019 (ends around Jan. 31), its comps dropped 0.3% and 19.4%, respectively. People have been increasingly downloading games rather than buying them from retailers like GameStop, and there's no reason to think this won't continue.

While management is hoping to get a boost in sales after Sony and Microsoft release new game consoles later this year, this may not provide the same effect that it has in the past. Both are putting out versions without a disc drive in order to encourage digital distribution.

So, instead of buying physical games from GameStop, you can download games from the two game system makers. Therefore, while the new systems may help GameStop's short-term sales, it faces a challenging environment that's only likely to get tougher.

On the positive side, management has tackled its expenses. In the recent quarter, GameStop, as part of its cost-cutting plan, slashed selling, general, and administrative expenses by nearly $134 million to roughly $348 million.

However, lowering costs is not a recipe for long-term success. Ultimately, GameStop will need to produce positive sales growth, and with technology changing the landscape, that is a tall order. In short, I wouldn't play this game.