Please ensure Javascript is enabled for purposes of website accessibility
Log In Help Join The Motley Fool
Free Article Join Over 1 Million Premium Members And Get More In-Depth Stock Guidance and Research
By John Rosevear – Sep 24, 2020 at 9:12AM

ChargePoint, one of the first and largest electric-vehicle recharging networks, said on Thursday that it will go public via a merger with special-purpose acquisition company Switchback Energy Acquisition (SBE).

The proposed deal values ChargePoint at $2.4 billion and is expected to close by the end of 2020. Reuters reported last week that the two companies were considering a merger.

The deal follows the broad pattern of other recent deals involving electric-vehicle start-ups and special purpose acquisition companies, or SPACs, that have drawn intense interest from auto investors in 2020. As in the deal that took electric-truck start-up Nikola public in June, the ChargePoint deal includes a so-called PIPE: "public investment in private equity."

PIPE investors agree in advance to invest a set amount in exchange for stock at a set price, typically discounted. The ChargePoint deal includes a $225 million PIPE, with investments from institutional investors including Baillie Gifford and funds managed by Neuberger Berman.

The merged company, to be called ChargePoint Holdings, will realize about $493 million in net proceeds from the deal, and will have a total of $683 million in cash. Pasquale Romano, ChargePoint's current CEO, will lead the combined company.

Switchback Energy is led by veteran energy investors including CEO Scott McNeill, a former executive of oil and gas company RSP Permian. McNeill said that with the total addressable market for electric-vehicle charging set to grow dramatically, ChargePoint is a compelling merger target. 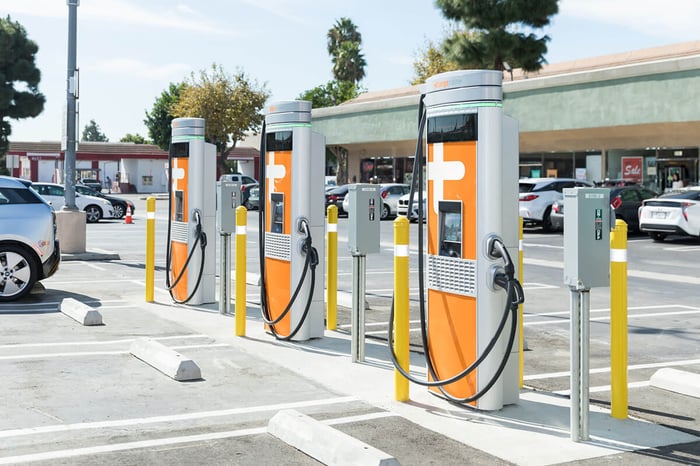 ChargePoint, one of the oldest and largest charging networks, has about 115,000 electric-vehicle chargers in service now. Image source: Maria Hedrick via ChargePoint.

ChargePoint, founded in 2007, has become a dominant player in the emerging electric-vehicle-recharging industry. The company has about 115,000 charging points around the world, a total it expects to raise to about 2.5 million by 2025, and counts BMW, Daimler, Siemens, and Chevron among its investors.

ChargePoint generated $147 million in revenue in 2019. It expects to use the proceeds of this deal to expand in North America and Europe, and aims to be profitable by 2023.