Please ensure Javascript is enabled for purposes of website accessibility
Log In Help Join The Motley Fool
Free Article Join Over 1 Million Premium Members And Get More In-Depth Stock Guidance and Research
By James Brumley – Sep 26, 2020 at 9:30AM

If the recent interest from an activist investor is a prelude to a breakup of the company, it's too soon.

Trian Fund Management's new argument regarding the best course of action for Comcast (CMCSA 1.55%) makes a fair amount of sense. When the cable giant initiated its acquisition of NBCUniversal back in 2009, the deal was rooted in assumptions that combining a cable distributor and broadband provider with a movie studio and a network television platform would provide more leverage for all four businesses. But, as it turns out, the growth of streaming video democratized a whole swath of the entertainment sector, keeping the growth of Comcast's various operating arms -- and its original vision -- in check. After a decade of disappointment, something needs to give.

The experiment involving combine those different types of entities, however, isn't quite over yet. It's going to take another five years or so for the initial plan to fully play out. 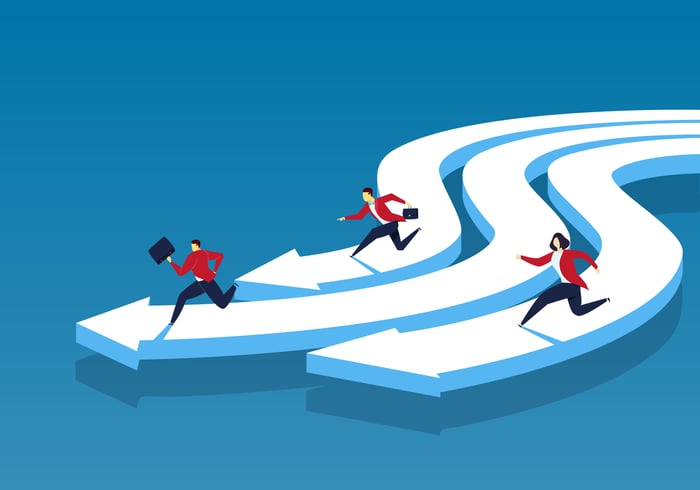 Trian Fund Management now owns just a little under 1% of Comcast. That's not a lot in the grand scheme of things, but it was enough of a stake to get Trian founder Nelson Peltz and his team in front of Comcast's management. As a statement from the activist investment firm explained earlier this week, "Trian believes Comcast's stock is undervalued. We have recently begun what we believe are constructive discussions with Comcast's management team and look forward to continuing those discussions."

The nature of those discussions was not made clear. But given Trian's previous efforts to break up Procter & Gamble and PepsiCo, it's not a stretch to suggest that Peltz may be pushing again for a breakup that lets the market independently value each piece of the company. He may also be concerned that all those different moving parts are causing too many distractions for management.

If splitting Comcast into its basic components is his ultimate plan though, Peltz is looking past an important detail.

Using one to sell the other

Admittedly, buying NBCUniversal hasn't paid massive dividends for Comcast. The company's cable arm still has to pay stiff carriage fees to content providers like Walt Disney and ViacomCBS, and it still relies on cable rival Charter (CHTR 2.41%) to carry NBC and Universal content. Meanwhile, the shocking success of Netflix (NFLX 0.13%) -- specifically, the 178 million streaming subscribers it has added over the course of the past 10 years -- has contributed to the slow and steady decline of Comcast's cable business. The good news is that the loss of cable customers has been largely offset by the growth of Comcast's broadband service. The bad news is that there's no evidence that meaningful leverage has been created from that acquisition.

That doesn't mean that such leverage isn't on the way though.

Yes, the advent of Comcast's ad-supported streaming service Peacock is a big step toward this goal. It has already accumulated at least 15 million "subscribers" since it became available to Xfinity (Comcast's cable and broadband brand) customers in April. While the company hasn't disclosed how many of those users are already paying for other Comcast services, clearly, some of them are. The free add-on makes Xfinity Flex and X1 far stickier products.

Comcast's foray into the mobile phone arena is another example of how it's using one business to bolster another. Xfinity Mobile offers low-cost wireless service to the company's broadband subscribers. It's able to offer cost-competitive phone service, though, because much of the connectivity that it requires is provided using the company's existing Wi-Fi hotspot infrastructure. Users don't really care, of course. They just want their mobile phones to work.

While Peacock and Xfinity Mobile are the only two major offerings that foster loyalty to the Xfinity brand, bear in mind, the latter is only a few years old, and the former is only a few months old. The company is still closer to the beginning of both learning curves than it is to the end of them. As Comcast gets better, it may also become more comfortable with expanding its cross-selling options.

And it's got plenty of options. Remember, Comcast's NBCUniversal is also the majority owner of video-on-demand rental website FandangoNow, and now owns all of a similar digital video platform called Vudu. Those platforms are not just other ways to monetize NBC and Universal content -- they could conceivably be leveraged to add value to Xfinity's services. Or vice versa.

Also bear in mind that Comcast acquired ad-supported video service Xumo in February, giving it yet another streaming brand for consumers and advertisers who may be wary of an NBC and Universal-focused Peacock. Comcast also owns Sky, which is a huge pay-TV name in Europe with content that could be packaged in various ways for other media services -- even if we don't yet know how.

The point is, if a breakup is part of Peltz's plan, it's absolutely too soon to make such a call. Comcast has only recently recognized all of its options to cross-market its services. It may take the company another five years to make the most of those opportunities. It shouldn't be undermined in the meantime.

Of course, if Peltz's only plan is to encourage Comcast to accelerate its cross-selling efforts, his involvement should be welcomed by shareholders.