The cryptocurrency market was a big catalyst for NVIDIA (NASDAQ:NVDA) back in 2017 and 2018, as currency miners lapped up graphics processing units (GPUs) in big numbers to help in their efforts to mine Ethereum, bitcoin, and other digital currencies.

According to one estimate, cryptocurrency miners reportedly bought 3 million graphics cards in 2017, worth $776 million. This lead to a shortage of graphics cards, and video gaming enthusiasts had to pay huge premiums to get their hands on NVIDIA and/or AMD's chips. GPUs such as the GTX 1070 that carried an average price of $370 were being sold at over $700 at the beginning of 2018.

Now it looks like that catalyst may be about to make a comeback. 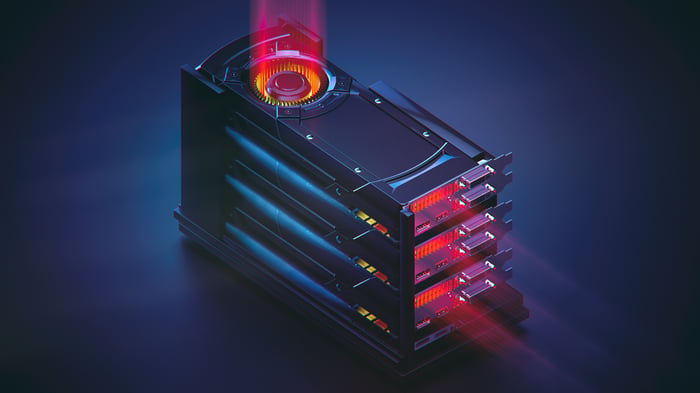 NVIDIA won big from cryptocurrencies in 2017-18

NVIDIA's gaming business was flying high in fiscal 2018 (which ended on Jan. 28, 2018). The graphics specialist generated $5.5 billion in revenue from its gaming segment that fiscal year, an increase of 36% over the prior year. RBC Capital Markets analyst Mitch Steves estimated that NVIDIA earned $1.95 billion in additional revenue from April 2017 to July 2018 thanks to cryptocurrency-related demand.

NVIDIA's official estimate was that it generated $602 million in revenue from sales to cryptocurrency miners during that time. But the actual number was expected to be much higher, according to Steves, as NVIDIA reportedly captured 75% of the cryptocurrency GPU market that he estimated at $2.75 billion over that time frame.

A similar trend is reportedly being seen once again after the release of NVIDIA's latest Ampere graphics cards, which are packing serious performance gains over the previous generation cards at aggressive prices.

Earlier this month, Tom's Hardware reported that NVIDIA's latest GeForce RTX 3080 graphics card has caught the interest of Ethereum miners, who can recoup their investment on the new card in less than 10 months, assuming they buy it at the starting price of $699.

For comparison, an RTX 2080 based on the older Turing architecture and priced at $699 at launch reportedly takes around 2.5 years for Ethereum miners to recoup their investments. This huge difference can be attributed to the computing power of the new NVIDIA card as compared to its predecessor.

The hash rate (which refers to the speed of mining cryptocurrency) of the RTX 3080 is reportedly three to four times that of the RTX 2080. As a result, miners can mine more cryptocurrency and get a bigger reward for the same effort and time.

This may be one of the reasons the RTX 3080 is in high demand at launch. According to NVIDIA, the new cards attracted "four times the unique visitors to our website, 10 times the peak web requests per second, and more than 15 times the out clicks to partner pages." This happened despite NVIDIA beginning production of the RTX 3080 in August and increasing supply to partners every week.

In fact, the new card went out of stock as soon as the sale went live on NVIDIA's website, and the company had to issue a formal apology to customers. The chipmaker pointed out that its store was overrun by "malicious bots and resellers."

While NVIDIA is working to ramp up the supply of its new graphics cards, it remains to be seen when it will be able to catch up to the demand. A potential increase in demand from gaming enthusiasts during the upcoming holiday season and the additional pressure from cryptocurrency miners throws open the possibility of a short supply of graphics cards.

As a result, don't be surprised to see a jump in graphics card prices and demand in the forthcoming quarters -- a development that is likely to help NVIDIA sustain its terrific growth streak.

Is This Massive NVIDIA Catalyst About to Make a Comeback? @themotleyfool #stocks $NVDA Next Article
Current