The mobile payments leader has a bright future.

Square (SQ -7.39%) has been one of the top-performing stocks on the market in recent years. The mobile payment company's stock price has returned more than 1,100% over the past five years, and this year it is up more than 150%. Square has been a growth machine, pandemic or no pandemic.

With such strong growth, it has attracted a lot of investors -- and a lot of expectations. At Friday's close, its price-to-earnings ratio was a ridiculously high 245 and its price-to-book-value an astronomic 34. Is Square primed for a correction if the tech bubble bursts? And if so, is it still a buy today?

The technology sector has driven the resurgence of the stock market since its March lows. Stock prices have skyrocketed for many tech companies, particularly those, like Square, that have provided a critical service while businesses have shut down or scaled back during the pandemic. Square's technology allows sellers to process payments, payroll, and other functions, and it lets consumers send and receive money through a mobile app. Its services has been in high demand at a time when people are staying and working at home and social distancing. That has led to meteoric growth. 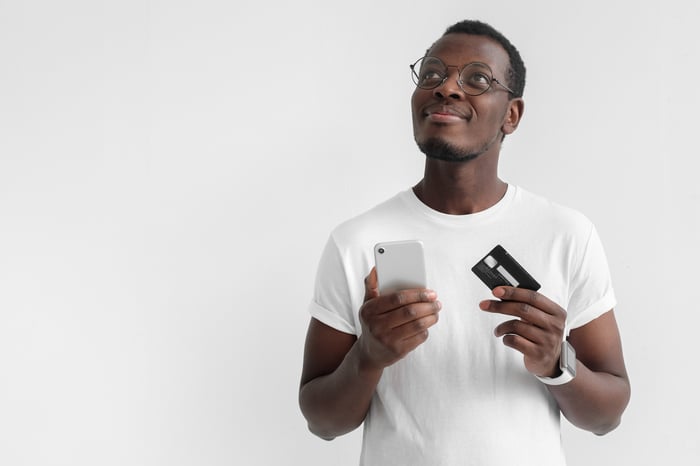 In the second quarter, revenue jumped 64% from the same period the previous year to $1.9 billion, while gross profit rose 28% to $597 million. The Cash App generated a big chunk of it, with $1.2 billion in revenue and $281 million in gross profit in the quarter. It had 30 million active users in June, while the Cash Card, a debit card tied to the Cash App, had about 7 million users. These gains made up for a 17% drop in revenue from the seller side of the business as transactions slowed due to the shutdowns.

The run-up in the tech sector saw some backlash in September, as the sector is down about 10% this month. The high-tech stock valuations are at odds with lower consumer spending, high unemployment, and sputtering economic growth. Many fear that the microburst that we've seen in September is just the opening act for a full-blown bursting of the tech bubble, the likes of which we have not seen since the dot-com bust of 2000.

So where does that leave Square?

Square has legs and room to run

Square has been dragged down about 5% this month in the tech sell-off, but its multiples remain very high. Should the bubble burst, would Square still remain a good investment? For long-term investors, the answer is yes. The long-term trends boosting Square and the market-leading position it enjoys are just too good. Even if there is a crash, a bubble, or any other term you want to use for a correction, it will be short-term. Long-term, Square will be a winner, for a few good reasons.

First, Square is at the forefront of a long-term trend away from cash to digital payments. According to a recent study, many developed economies in Europe and Asia will be almost fully cashless by 2030, with the U.S. not far behind. Square recently released its own report that said the pandemic has accelerated that trend. And, according to analysts at MoffettNathanson, Square only has 2% of the addressable $60 billion market with its Cash App, and within five to seven years it will produce $5 billion in annual revenue and $2 billion in annual earnings.

Second, Square is different from most of its competitors because it serves both the buyer and seller ecosystems. While both ecosystems are strong and growing, the key, says CEO Jack Dorsey, is connecting the two. "We do believe that there is a lot of real strength that comes from connecting the two ecosystems," Dorsey said during the first-quarter earnings call.

Square recently introduced two services for its customers that will allow the company to do that. Its new On-Demand Pay service allows the payroll customers' employees to take a cash advance of up to $200 from their earned wages at any time through the Cash App. And its Instant Payments service enables payroll customers to instantly fund their payrolls with money in their balance in their Square account.

Square also received approval from the Federal Deposit Insurance Corp. for an industrial loan company (ILC) bank charter. The bank is expected to launch in 2021, and that would allow Square to provide loans and open the door for deposit and direct deposits using the Cash App, thus tying the two ecosystems together.

So, even if Square hits a rough patch in the coming weeks, this fintech remains a great long-term stock that will generate great returns for years to come.