The market is trying to mount a bigger rebound.

The Nasdaq Composite (^IXIC -1.59%) has gone through a correction over the past month, with investors facing an uncertain future. The COVID-19 pandemic, the U.S. presidential election, and issues like trade and economic stimulus are all making it difficult for market participants to figure out what's ahead. Yet investors decided on Monday that they'd had enough gloom and doom for one month, and that sent the Nasdaq up nearly 2% as of just before 3 p.m. EDT.

Just about everything Tesla (TSLA 0.91%) has touched lately turns to gold, and that was the case for Australian company Piedmont Lithium (PLL). Unfortunately, the news wasn't as good for Inovio Pharmaceuticals (INO 6.70%), which got some bad news that sent its stock sliding.

Piedmont announced that it had signed a binding supply agreement with Tesla. The lithium miner owns a project in North Carolina that it believes will produce 160,000 metric tons of a lithium-containing concentrate. Tesla will take about one-third of that planned production off Piedmont's hands, with a five-year term that can be extended for an additional five years if the parties agree. 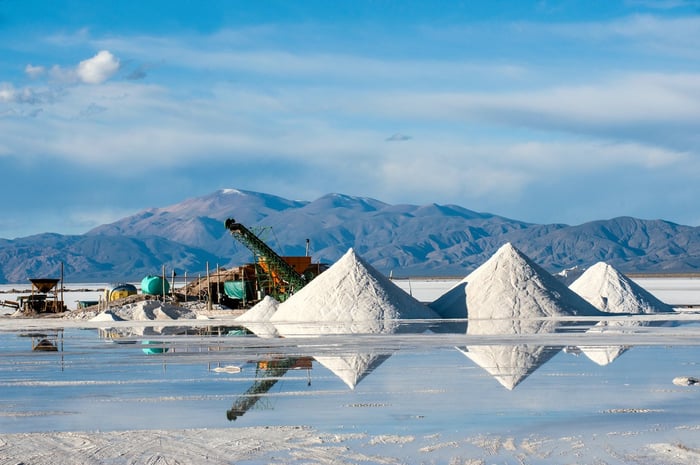 There's a big condition, though. Both Tesla and Piedmont have to agree to a start date between July 2022 and July 2023. If the development schedules of either the miner or the automaker don't line up, then there would presumably be no further obligation.

Piedmont CEO Keith Phillips said that the lithium company will accelerate its development plans to try to meet Tesla's needs. Investors seem to see this as a done deal, but there's still some uncertainty surrounding whether it'll actually happen.

Inovio gets a no

On the other side of the ledger, Inovio Pharmaceuticals saw its stock plunge 28%. The drug company got bad news from the Food and Drug Administration about its candidate vaccine for COVID-19.

Inovio had asked the FDA to start a phase 2/3 clinical study of its INO-4800 developmental vaccine. Instead, the FDA placed the study under a partial clinical hold. Inovio didn't get into details about the reasoning behind the move, choosing instead to simply note that the FDA has more questions about how the study will work.

The company was careful to say, though, that the FDA hadn't imposed the hold due to any adverse events in its early-stage clinical trial of INO-4800. That at least holds out hope that Inovio might be able to satisfy whatever concerns the FDA has without endangering the health of those who might eventually use the COVID-19 vaccine.

Investors aren't happy with what will be at least a month's delay in moving forward. With the race on among biotech and pharma companies to come up with a vaccine, Inovio doesn't want to fall behind its rivals.

Even as the Stock Market Rose Friday, Investors Got a Harsh Reminder