Please ensure Javascript is enabled for purposes of website accessibility
Log In Help Join The Motley Fool
Free Article Join Over 1 Million Premium Members And Get More In-Depth Stock Guidance and Research
By Keith Noonan, Joe Tenebruso, and Will Healy – Oct 4, 2020 at 8:00AM

The online-retail revolution is still just getting started, and these industry leaders could deliver stellar returns.

Amazon (AMZN -1.63%) has been one of the market's best performing stocks. The company's share price has skyrocketed roughly 2,000% over the last 10 years thanks to a dominant position in both e-commerce and cloud computing services.

Amazon remains one of the best companies in the world and a promising long-term investment, but three Motley Fool contributors have weighed in with e-commerce stocks that could deliver even better returns. Read on to see why they think Alibaba (BABA 5.25%), JD.com (JD 6.69%), and Shopify (SHOP -2.31%) have what it takes to beat the online-retail leader's performance. 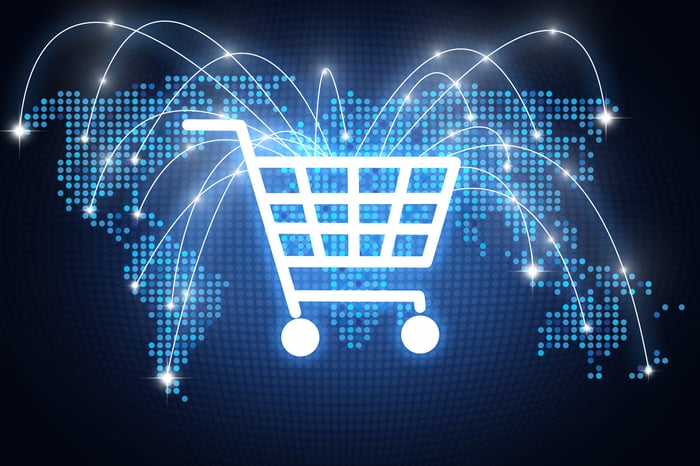 Keith Noonan (Alibaba): Alibaba is sometimes referred to as "the Amazon of China" because it also boasts a market-leading position in its home country's online-retail space. Today, Alibaba has a market capitalization of roughly $787 billion -- or roughly half of Amazon's current market cap. Considering that China has a population of roughly 1.4 billion people and is on track to see strong economic growth and a big increase in per-capita discretionary spending power, it's not unreasonable to think it could outperform the American company it's often compared to.

China's e-commerce market already trounces the size of the online retail market in the U.S., and it's on track to grow at a much faster pace. eMarketer estimates that Chinese e-commerce spending will have grown from roughly $1.9 trillion in 2019 to $4.1 trillion 2023. That incredible backdrop of growth should create huge tailwinds for Alibaba, and there's plenty of room for expansion past the end of that projection period. Taking a page out of the Amazon playbook, Alibaba is also making a big play in the cloud services space, and revenue for the segment grew 59% year over year last quarter.

Is Alibaba a better company than Amazon today? Probably not. Few companies are. However, it has powerful competitive strengths and explosive growth opportunities of its own, and there's a good chance it will prove to be a better stock for investors who buy at current prices.

This Chinese e-retailer could outperform Alibaba

Will Healy (JD.com): In the Chinese e-commerce market, investors tend to compare JD.com it to its larger rival Alibaba. However, JD.com is the second-largest online retailer in China. Moreover, it has expanded its network into other Asian countries and has partnered with Walmart in China.

Where JD.com stands out over Alibaba is in its logistics. Alibaba tends to attract most of the comparisons to Amazon since both companies operate cloud computing businesses.

Nonetheless, it is JD.com that has built the Amazon-like logistics network. JD.com typically warehouses and owns the merchandise it sells. In contrast, Alibaba tends to act more like a middleman between manufacturers and customers.

Fortunately for investors, the appeal of JD.com appears to also extend to its stock. JD.com trades at a forward P/E ratio of about 34. From that perspective, it implies a slight premium above Alibaba's forward multiple of about 30.

However, JD.com is generating more than double the earnings increases. In the most recent quarter, JD.com's adjusted profits rose 53% to $0.50 per diluted ADS. This compares with an 18% increase in Alibaba's adjusted earnings over the same period. Moreover, for the upcoming quarter, analysts forecast a 38% profit increase for JD.com from the year-ago quarter, versus just 15% growth for Alibaba in the 12-month timeframe.

The overall growth of global e-commerce will probably boost most of the stocks in this industry. Nonetheless, JD.com's profit increases relative to its valuation make it one of the better buys among e-commerce stocks.

Joe Tenebruso (Shopify): There aren't many businesses better than Amazon. The e-commerce juggernaut dominates the online retail industry in the U.S. and many other parts of the world. Even at this point, Amazon's growth prospects remain very attractive. But if you're looking for an e-commerce company that's growing even faster than Amazon, take a look at Shopify.

COVID-19 and related social distancing measures are accelerating the shift of retail sales to online channels. This is boosting demand for Shopify's services, which were already in high demand before the coronavirus pandemic. Shopify's revenue soared 97% year over year to $714.3 million in the second quarter, fueled by a 71% surge in new store creations and a 119% rise in gross merchandise volume -- essentially, the total dollar amount of sales merchants made on its platform -- to $30.1 billion.

Better still, Shopify is becoming more profitable as it scales its revenue base. Its adjusted operating profits increased to $113.7 million, or 16% of revenue, up from $6.4 million, or 2% of revenue, in the year-ago quarter.

Best of all, Shopify's expansion is still in its early innings. The company pegs its addressable market for small businesses alone at $78 billion, leaving plenty of room for growth in the years ahead.

Why Shares of JD.Com, TAL Education Group, and Pinduoduo Are Surging This Week
349%