Please ensure Javascript is enabled for purposes of website accessibility
Log In Help Join The Motley Fool
Free Article Join Over 1 Million Premium Members And Get More In-Depth Stock Guidance and Research
By James Brumley – Oct 13, 2020 at 8:45AM

There's a clear common element among the tickers outpacing the Nasdaq Composite's recent rally, and it has long-term legs.

The Nasdaq Composite has logged an impressive performance since its late September lull, up 12% from the low point of last month's sell-off, led by the likes of biotech companies Veracyte and Fate Therapeutics, as well as diagnostics stock CareDx. While they're ripe for a little profit-taking now, the COVID-19 contagion is creating clear opportunities for a bunch of healthcare stocks.

That's not the only bullish theme evident among the names leading the Nasdaq's recent rally, though. Solar stocks SunPower (SPWR -1.82%), Enphase Energy (ENPH -2.83%), and SolarEdge Technologies (SEDG -1.56%) are also on a roll. Each is up more than 60% over the past four weeks, and each has gained more than 20% in just the past week.

Sure, like other Nasdaq names, these stocks are subject to some near-term profit-taking. Any dip is ultimately a buying opportunity, however, as the tailwind pushing these stocks higher looks built to last. 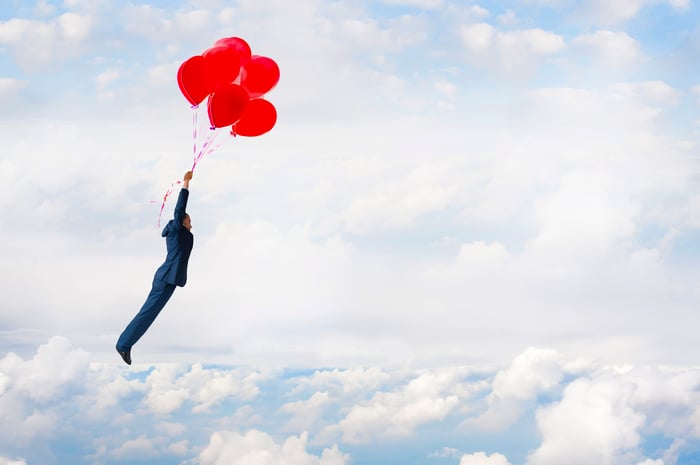 Solar's down, but nowhere near out

The market's industry groupings run hot and cold. The underpinnings for solar's recent strength, however, aren't temporary in nature.

Perhaps the most powerful of these forces is the wide lead Democratic presidential candidate Joe Biden has in polling over Republican incumbent Donald Trump. The most recent Pew Research poll suggests Biden has a 10-percentage-point national lead over his rival.It bodes well for the solar power industry largely because Biden's platform includes plans that will put the nation on a path toward "a carbon pollution-free power sector by 2035." Neither Biden nor running mate Sen. Kamala Harris has widely touted solar power as the means to make that happen, for the record, but there are few other viable alternatives to that end.

Piper Sandler analyst Kashy Harrington also recently explained how a Biden presidency would probably extend the solar investment tax credit program that's on track to be gradually phased down from its present rate of 30%.

The Solar Energy Industry Association also notes that new photovoltaic power purchase agreements made during the second quarter translate into a record-breaking backlog of 62 gigawatts' worth of production power to be established in the future. Those commitments have led the association to an outlook of 42% more solar panel installations in the United States over the coming five years than we've seen during the past five.

The rest of the world is seeing similar demand that will drive similar growth. Fitch analysts are calling for annualized installation growth of 9.8% for the coming decade.

The rising tide bodes well for the solar industry, including the aforementioned SolarEdge Technologies, Enphase Energy, and SunPower. It's not just the Nasdaq-listed names that are benefiting, though. Piper Sandler initiated coverage of several residential solar stocks, including NYSE-listed Sunnova Energy International (NOVA -5.53%), specifically because the "disruptive growth sector" will be boosted by "the societal onus for environmental sustainability."

That said, investors should bear in mind that this past month's gains have much to do with the presidential race's dynamics, which may reflect more hope and emotion than level-headed thinking. This in turns sets the stage for more volatility immediately before and shortly after the election no matter who ends up winning. Stepping into any of them exactly right now isn't necessarily the optimal move.

In other words, take the hint, but take your time too.

These Stocks Are Down More Than 50% Year-to-Date, but They Could Be Absolute Steals