Both are large pharmaceutical companies, but these stocks have some huge differences that can help investors pick the better long-term investment.

Many large pharmaceutical companies fall into the category of widow-and-orphan stocks -- stocks that have a relatively high dividend yield and pose very low risks to investors. An investment in a widow-and-orphan stock is intended to grow over time, provide income, and generally go untouched for long periods. When evaluating companies offering that kind of safety, traditional metrics sometimes fail to capture some of the most important factors of the company.

AbbVie (ABBV -0.76%) and Johnson & Johnson (JNJ -0.39%) are two pharmaceutical companies that fit the widow-and-orphan description. So which is a better buy right now? 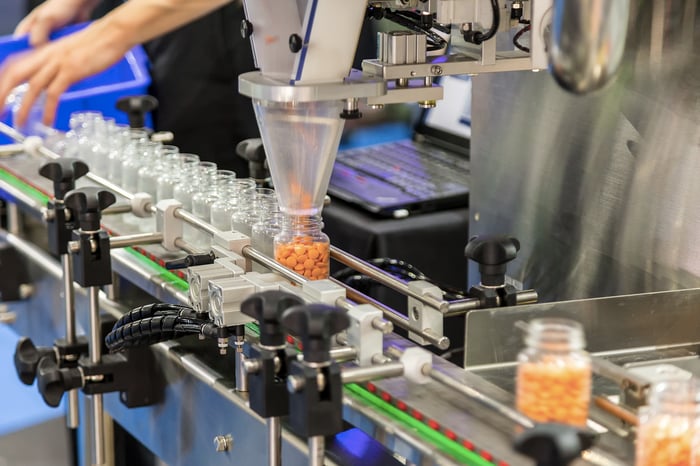 So similar, yet so different

Pharmaceutical companies like AbbVie and Johnson & Johnson all develop, manufacture, and market drugs, but are wildly different businesses when you dig into the details. AbbVie was spun out of Abbott Labs (ABT -1.01%) in 2013 in order separate its pharmaceutical business from its legacy medical products business. Shortly after the split, AbbVie launched Humira, a treatment for rheumatoid arthritis, psoriasis, and Crohn's disease, which made up more than half the company's revenue in 2019. Although Humira is the currently the best-selling drug in the world, it will face an increasing number of biosimilar challengers over the next several years. AbbVie completed its acquisition of Allergan for $63 billion in May in an attempt to diversify its revenue streams and reduce the risk inherent in one drug providing the majority of the company's sales. Allergan sports a growing global aesthetics business, with leading brands Botox and Juvederm.

Johnson & Johnson is as diversified as a healthcare company can get. In 2019, the company's $82 billion in sales was spread across multiple products in pharmaceuticals ($42 billion), consumer products ($14 billion), and medical devices ($26 billion). The risk for Johnson & Johnson lies in the never-ending stream of legal settlements related to various errors, oversights, and malfeasance from the past. A recent analysis estimated the company could shell out more than $6 billion to settle the various lawsuits that are currently active. These are not the only differences between the two companies. Historical financial data can also help investors answer the question of which will make a better investment going forward.

We've all heard the disclaimer that past performance is no guarantee of future results, but digging into the past can help us better understand where each company stands today. If we compare metrics related to growth, yield, and profitability since AbbVie went public, it should give us an idea of how the share prices got to where they are, and how they might fare in the future. When we focus on stock price, we see that AbbVie has had an edge since 2013, returning about 40% more than Johnson & Johnson. 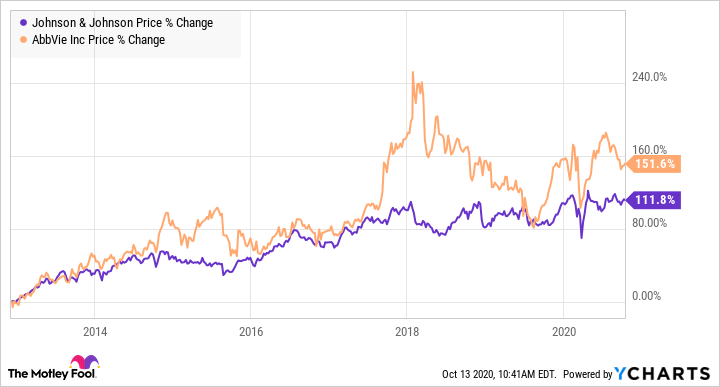 Another useful point of comparison between two large widow-and-orphan stocks is their dividends. As mentioned above, many people buy these stocks for a stable income stream and the luxury of not having to pay attention to the stock price. Again, AbbVie delivers. Management has put an emphasis on increasing the yield -- and it shows. 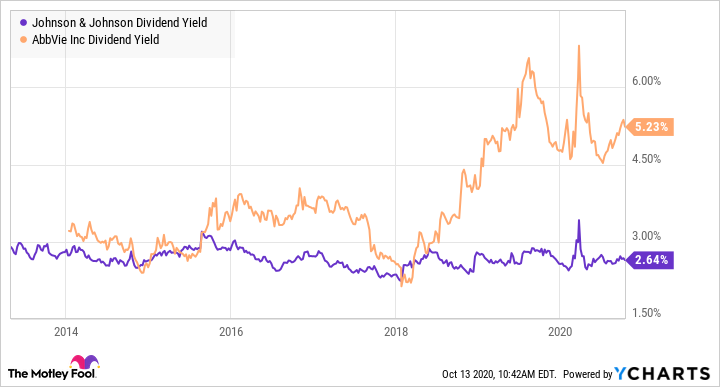 If sales are not growing, eventually profits, dividends, and usually returns, are cast aside as a company shrinks. Neither of these companies is setting the world on fire with amazing year over year revenue growth, however, neither's dividend is at risk. Both companies have payout ratios -- the percentage of earnings paid out as dividends -- below 100%. Johnson & Johnson has a slightly safer dividend as its payout ratio is 66%, compared to 81% for AbbVie.

Yet another way to for investors to compare companies is by evaluating the cash flow yield metric. This measure is the amount of free cash flow a company generates divided by its market capitalization. Although it can be useful when comparing two similar companies, market capitalization and free cash flows can fluctuate wildly for stocks. Currently, AbbVie sees a significantly higher portion of every dollar end up as cash to do with what they please. AbbVie's free cash flow yield is 10.5% compared to 4.3% for Johnson & Johnson. This may be explained by Johnson & Johnson's mix of businesses with lower profit margins.

So, AbbVie's stock has consistently outperformed Johnson & Johnson's, but investors also need to consider how the market is valuing both companies' futures.

Looking through the windshield

Using the forward price-to-earnings (P/E) ratio, it is clear that investors value a dollar of Johnson & Johnson's earnings more dearly than a dollar of AbbVie's. Investors are currently paying 19 times next year's earnings for Johnson & Johnson and only 8.4 times AbbVie's. Higher P/E ratios are often connected to a company's anticipated growth rate, and analyst estimates can help us confirm the theory. Headlines are generated when companies beat or miss earnings estimates each quarter, but the value of a company is driven by what it earns over longer periods. The chart below shows that estimates of Johnson & Johnson and AbbVie's growth over the next three to five years are very similar. The difference in P/E ratios doesn't appear to be driven by anticipated growth rates. 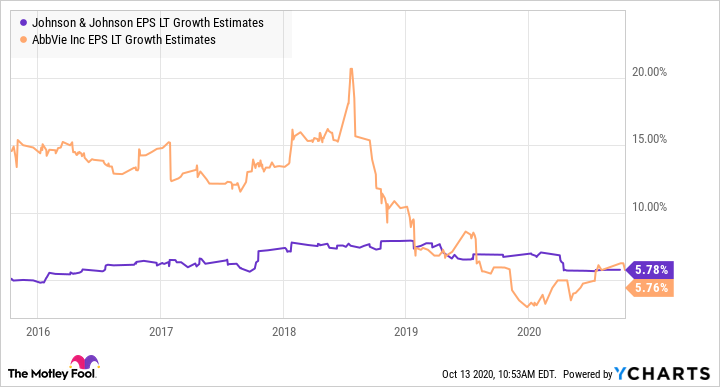 Despite a similar growth rate and a poorer cash flow yield, the market thinks a dollar of Johnson & Johnson earnings is more than twice as valuable as the same dollar generated by AbbVie. Is this reasonable, or is it a mistake by the market that investors can take advantage of?

Johnson & Johnson's brand name is certainly worth some premium. After all, the company has been around since 1886 and has paid a dividend for 48 straight years. AbbVie only came to the public markets in 2013. Johnson & Johnson has also been on Fortune Magazine's most-admired list for 18 consecutive years. Perhaps Johnson & Johnson's greatest strength is its diversification. Having such breadth of businesses all contributing to revenue provides a lot of comfort in times of market turmoil, and guarantees that no one product will have much impact on your investment.

On the other hand, AbbVie has a very different story. Despite a pipeline of cancer drugs and large recent acquisition, more than half of the company's sales comes from one product. The company is also just seven years old. AbbVie does, however, show up in Fortune's list. The company was listed as the 53rd most admired company in 2020 and the 87th best company to work for.

When you stack up the data, it's clear investors love Johnson & Johnson for its safety and history. But investing is about the future, not the past. I believe investors who are willing to tolerate a little more risk will enjoy better returns buying shares of AbbVie due to its efforts to diversify sources of revenue and the flexibility its strong cash flow yield provides. In five years, AbbVie may look more like Johnson & Johnson than it does today. If that is the case, expect the pharmaceutical company's shares to go much higher.