If a consumer hasn't signed up by now, they may be very tough to win over from here.

Entertainment giant Walt Disney (DIS -0.15%) is going all-in on streaming. The company unveiled a major reorganization on Monday ultimately meant to augment its already incredible success with Disney+. CEO Bob Chapek confirmed in a subsequent interview with CNBC that streaming is now indeed the company's priority.

It's almost certainly the right move. Consumers were moving away from cable television and toward streaming anyway. The COVID-19 pandemic only accelerated this shift.

If you think this expanded effort is going to be easy money for Disney though, think again. 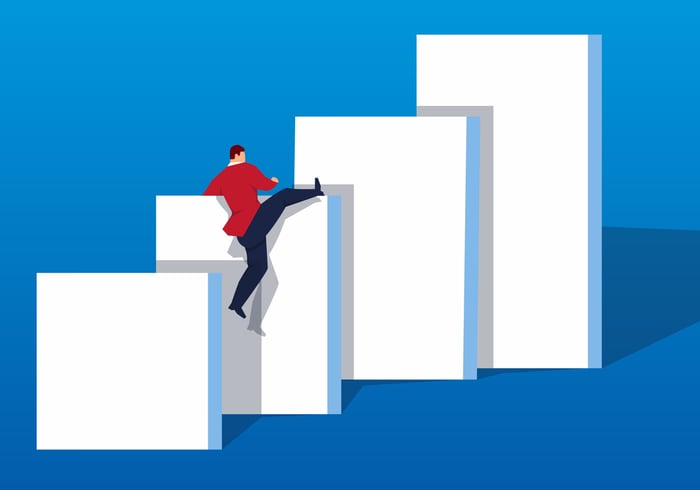 Walt Disney will reconfigure its media networks division, studio entertainment arm, and direct-to-consumer and international unit. Going forward, one division will just focus on making shows and movies, while another arm will monetize these creations as it sees fit. "Managing content creation distinct from distribution will allow us to be more effective and nimble in making the content consumers want most, delivered in the way they prefer to consume it," Chapek said Disney's announcement.

A wide swath of those consumers clearly want it streamed. As of the latest reported headcount, subscription-based streaming service Disney+ boasts 60.5 million customers. That's not bad for a platform that's been up and running for less than a year. The company's initial expectations were for a customer base of between 60 million and 90 million subscribers -- by 2024.

It remains to be seen if Disney+ (with the help of Hulu and ESPN+), however, can actually drive enough meaningful revenue and revenue growth in the future to fully justify the reorganization and new focus.

The table below puts things in perspective. Given the last known subscriber counts for each service and the disclosed per-customer monthly revenue data Disney is still supplying, the company's key streaming services are currently driving right around $11 billion worth of annualized sales.

It's a solid start, but it doesn't put the ball in the end zone, so to speak. For perspective, $24.8 billion worth of Disney's fiscal 2019 top line of $69.6 billion came from its television businesses like ABC and ESPN. Another $11.1 billion was driven by movies. Also notice how little is actually being collected per customer for Disney's streaming services.

But streaming is the direction the business is headed.

There are two ways to get more out of Disney's streaming businesses, of course. One is adding more subscribers. The second is raising its effective prices. Neither will be easy though, especially now.

As for adding more paying customers, UBS analyst John Hodulik already sees subtle evidence of a headwind. While he acknowledges most U.S. households have yet to test drive Disney+, he also points to the gradual easing of coronavirus lockdowns that funneled people toward the new streaming option earlier this year. There's also the upcoming end to a Verizon promotion that offered a year's worth of free Disney+ to new wireless customers. That year is almost up, and Ampere analyst Tony Maroulis doesn't expect all of those subsidized subscribers to stick with the service.

If Verizon customers call it quits, Disney+ and the company's other streaming services could see growth stall. Why would customers leave? A plethora of alternatives have come to the market just in recent months, kicking off a price war.

Remember those low monthly fees that Disney is collecting for its streaming services? They may be low for the foreseeable future. Not only are Comcast's Peacock and HBO Max from AT&T media entertainment unit Warner Brothers also low-cost competitors, but free-to-watch, ad-supported video names like Comcast's Xumo and Fox's Tubi have collectively added tens of millions of new viewers just since the end of 2019. It's tough to top the price of free. TV watchers, as it turns out, are basically OK with the occasional television commercial if it makes their streaming service cost less.

Underscoring this price challenge is the results of a survey performed by The Trade Desk early this year. That survey suggests that nearly 60% of U.S. consumers don't want to pay more than $20 per month for streaming services. Only one-fourth said they'd pay more than $30. Netflix and Prime from Amazon, however, were most people's first and second choices of streaming services. Disney's Hulu was a third choice for consumers willing to pay for three services, but that was a distant third.

The low-hanging fruit has been picked

Even before Disney+ launched in November, UBS found that nearly 80% of U.S. consumers had heard of the planned service, and 43% said they intended to sign up. If the pandemic didn't get them on board when it was still fairly new, it seems less likely it will happen now.

That's not to say it's a lost cause. Quite the contrary. Walt Disney can and probably will add plenty more streaming customers in the near future, here and abroad.

With unproven pricing power in an increasingly competitive market though, it would be naive to think the next 60 million paying Disney+ subscribers are going to be won anywhere nearly as easily or as quickly as the first 60 million were. Ditto for ESPN+ and Hulu, which are even older than Disney+. The excitement that stems from novelty has simply worn off.