Please ensure Javascript is enabled for purposes of website accessibility
Log In Help Join The Motley Fool
Free Article Join Over 1 Million Premium Members And Get More In-Depth Stock Guidance and Research
By John Ballard – Oct 18, 2020 at 6:45AM

Esports is one of the fastest-growing markets within the video game industry. Despite the cancellation of live in-person events during the pandemic, esports is still driving growth in Activision Blizzard's "other" segment, which includes revenue from Overwatch League and Call of Duty League. Although growth could be more difficult to come by going forward, Activision Blizzard remains focused on the long-term prize. 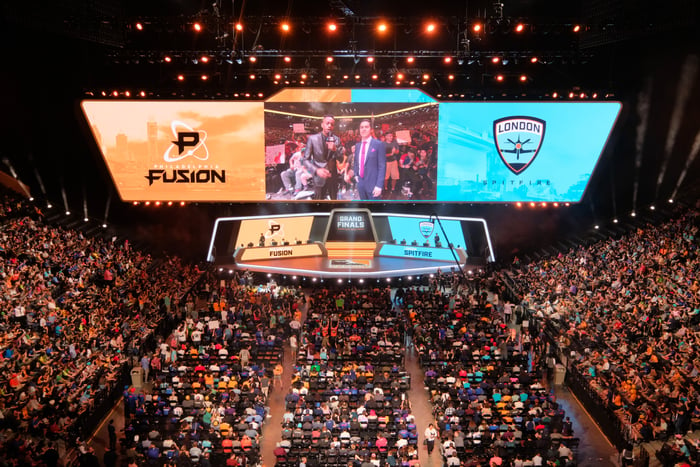 Blizzard spotlighted viewership results in China, which spiked 260% year over year. The data includes live plus 24-hour broadcast viewership. The actual number of people who watched the match are likely more than reported since the data doesn't include those who watch later by video on demand.

Nonetheless, the numbers are not exactly an apples-to-apples comparison with viewership from 2019. Last year, Blizzard reported a 16% year-over-year increase in global AMA for the Grand Finals. But the 2019 data was taken from a variety of digital streaming platforms, such as Amazon's Twitch, Zhanqi, NetEase CC, Huya, and Bilibili, in addition to the broadcast on Disney's ABC.

This year's data was taken from the same platforms, except for Twitch, Zhanqi, and ABC. Earlier this year, Activision Blizzard signed an agreement with Alphabet that made YouTube the exclusive broadcast partner for Overwatch League and Call of Duty League, replacing Twitch. As a result, the 2020 viewership data was taken from YouTube, which is less popular than Twitch as a live game-streaming platform.

Changing the platforms from which the data is measured makes it difficult to track the organic change in viewership from year to year. But it's worth noting that Overwatch League still reported an increase in AMA despite switching to a less widely used game-streaming platform (YouTube) for 2020. Overwatch League also didn't have the additional viewership that would have come from a more casual esports audience on linear networks, like ABC.

Ultimately, Activision Blizzard's interest in esports is about making money. Leaving the issue of platform comparisons aside, let's explore what all this means in dollars.

Esports revenue is small but growing

There is one important clue in the company's annual and quarterly reports that the esports business continues to grow. Activision Blizzard says that its "other" operating segment includes revenue from its distribution business in Europe, as well as Overwatch League and Call of Duty League. This line item increased by 82% from 2016 to 2019, reaching $648 million, or 10% of Activision Blizzard's total revenue.

The increase corresponds with the launch of Overwatch League and Call of Duty League over the last few years, and the associated team sales to get started. Through the first half of 2020, the "other" segment saw revenue increase by 26.7% year over year to $299 million.

Future results could be lumpy

Activision Blizzard has benefited significantly from the initial team sales, sponsorships, and media rights deals for its two flagship esports leagues. Overwatch League and Call of Duty League tap into the fast-paced action that gamers love about playing first-person shooters. But those are the only two shooters Activision Blizzard produces.

The company has other esports events in its arsenal, including events for World of Warcraft and Hearthstone, but those games don't have the same appeal as a first-person shooter. What makes Overwatch League and Call of Duty League potentially marketable to a wide audience is the city-based team structure of a traditional sports league. But it may take years for Activision Blizzard to cultivate the spirit and passion in some of these cities that fans have for their local NBA or NFL teams.

Right now, Activision Blizzard doesn't have any other games it could launch as a major esports league that have the same appeal as Overwatch and Call of Duty. Activision will likely have to rely on developing its existing leagues to continue growing its esports business. That could make future growth in the "other" segment more difficult from here, barring the further expansion of these leagues by selling more teams.

Keep in mind, CEO Bobby Kotick has a very long-term time horizon with the investments in the esports market. As he said in the 2019 shareholder letter, "The results of these efforts will likely be volatile and lumpy, but over the long term they will help solidify the enduring appeal of our franchises and set the foundation for substantial shareholder value creation."