And then there were three.

Everyone knows what a unicorn is, but what's a unicorn stock?

A unicorn stock is a private company -- one that has not yet gone through the IPO process and is not traded on a stock exchange -- that is so popular that it has already achieved an implied valuation of $1 billion or more, even without public dollars.

Once upon a time, such "unicorns" were rare. (Hence the name.) In today's overheated market, however, unicorns are galloping all over the joint. According to market researcher CB Insights, nearly 500 privately owned, $1 billion-valued companies now roam the Earth, in industries ranging from artificial intelligence to fintech to travel. 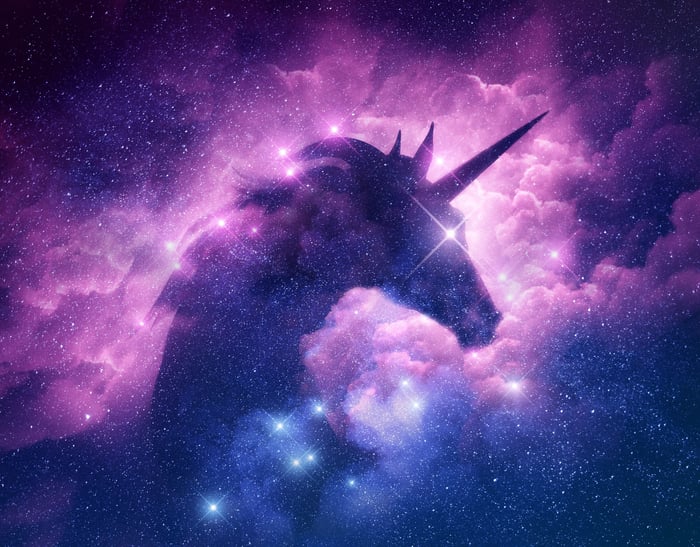 Get to know Virgin Orbit ...

In fact, up until 2017, there was only one space unicorn in existence: SpaceX. A second unicorn appeared that year when small rocket manufacturer Rocket Lab passed the $1 billion-mark. This week, investors discovered a potential third space unicorn stock, with Sir Richard Branson's Virgin Orbit preparing to join the club.

And yes, I said "Virgin Orbit." As distinguished from the better-known Virgin Galactic (SPCE -5.78%), Sir Richard Branson's publicly traded space tourism company, Virgin Orbit is a related company that has yet to IPO.

Virgin Orbit was established in 2017, the same year Rocket Lab became a unicorn. Perhaps not coincidentally, Virgin Orbit aims to directly compete against Rocket Lab in the small satellite launch market. Rocket Lab currently holds a leading position in this market, regularly launching its small rockets (carrying small satellites) into orbit from launch pads firmly bolted to the ground in Virginia and New Zealand. In contrast, Virgin Orbit is still trying to break into this market, and it's taking a novel approach. Instead of launching rockets from the ground, it will load them onto a modified Boeing 747 mothership, fly them to altitude, and then blast them into space from mid-air.

Despite having to play catch-up to market-leader Rocket Lab, some analysts consider Virgin Orbit "a front-runner" in the market for small satellite launch.

After all, Virgin Orbit's method of accessing space promises several advantages over ground-based launches. For one thing, it's cheap -- estimated at about $10 million to $12 million to launch a 500-kilogram payload into Low Earth Orbit. For another thing, it's flexible. Because an airplane can theoretically fly to any point on Earth before launching its payload, and point itself in any direction desired once it gets there, it can target essentially any orbital trajectory that a customer desires.

And, because an airplane isn't tied to any particular airport, it can avoid delays in launching due to bad weather, launch range incursions (so-called "wayward planes" and "wayward boats" that wander dangerously close to a rocket's flight path), or other hindrances. If a departure out of one airport proves unsuitable, Virgin Orbit's "Cosmic Girl" mothership could simply fly to a different airport, refuel, and take off from there before releasing its rocket.

... and meet the next space unicorn

Advantages like these may explain why investors value Virgin Orbit so highly. The company's upcoming funding round, which is scheduled to close before the end of this year, aims to raise "between $150 million to $200 million" by offering shares valuing the business at "around $1 billion," reports The Wall Street Journal.

In selling these shares, Branson will part with somewhere between a 15% and a 20% ownership stake in his company, in exchange for raising the cash Virgin Orbit needs to complete its first test flight to space (its first successful flight, that is -- its first launch attempt back in May ended in an abort), and begin commercial launching.

In so doing, he will also induct Virgin Orbit into the unicorn's club. By the time Virgin Orbit is ready to conduct an actual IPO of its own, it should be able to raise even more money by selling shares to the public at an even higher price -- growing its warchest, the better to compete with fellow space unicorns Rocket Lab and SpaceX.