Over the last few years, Amazon (NASDAQ:AMZN) has built a sizable advertising business, led by sponsored listings in its search results. Advertising directly on e-commerce channels like Amazon's marketplace is an effective way for marketers to reach shoppers when they're ready to buy.

Amazon is the market leader in the space. About $0.75 of every dollar spent on those kinds of ads goes to Amazon, according to eMarketer. Moreover, the research firm expects that number to climb to $0.77 by 2022. 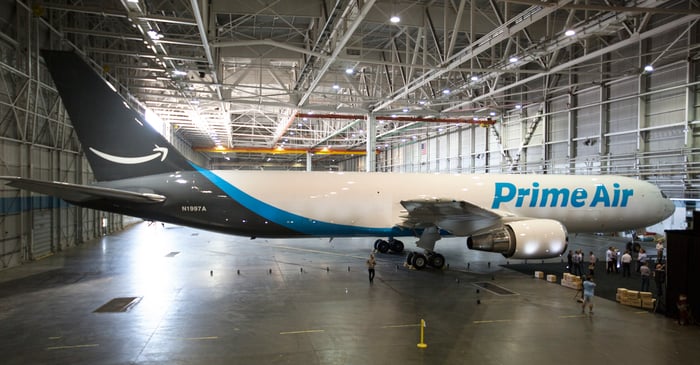 Amazon's ad sales are set to slightly outpace the market, up 39.1%. Walmart (NYSE:WMT), which has seen considerable growth in e-commerce thanks to online grocery sales, is expected to grow online ad sales 73.4% this year and continue gaining share over the next couple years.

While ad spend in e-commerce channels is increasing, though, it's likely coming at the cost of in-store displays. With less foot traffic, the value of advertising in stores is declining. Walmart's total transactions in the U.S. fell 14% year over year in the second quarter as consumers made fewer trips to its stores, but bought more on each trip.

Since Amazon's brick-and-mortar presence is relatively small, its online ad sales are practically entirely additive. Competitors like Walmart, however, are likely cannibalizing their existing ad sales.

Amazon has a few advantages in the online e-commerce advertising space that should enable it to continue building on its already dominant share.

First, it's increasing its share of the e-commerce market. Despite already accounting for more than 1 in 3 dollars spent online in the United States, Amazon's share of the market is still growing. Its market share growth is supported by a virtuous cycle. Continued growth in Prime memberships fuels participation in its third-party marketplace and Fulfilled by Amazon services, which reinforces the value of a Prime membership for consumers. With more shoppers going to Amazon.com for their needs, the potential number of ad impressions and the value of those ad impressions increases.

Second, Amazon has a major lead in data and ad technology. With much more shopper data than its competitors, Amazon's able to leverage shopper profiles, purchase and search history, and more into more targeted advertisements for its shoppers. The company also has the ability to sell ads on multiple platforms by offering marketers the ability to use its Fire TV connected-TV ads in conjunction with ads on its marketplace. Retargeting ads can increase their efficacy, and marketers will pay more for ads that convert at a higher rate.

With the e-commerce advertising market set to grow faster than e-commerce itself over the next few years, Amazon should see continued growth in its high-margin ad business. What's more, that growth will be entirely incremental to the online retailer. Meanwhile, competitors like Walmart will struggle to catch up to Amazon online while cannibalizing their in-store display advertising revenue.