The two aerospace companies both rely heavily on demand for new passenger jets, but their recoveries from the pandemic slump are likely to look quite different.

This has not been an easy year for Boeing (BA 0.39%) or aerospace composite technology company Hexcel (HXL -0.26%). Both companies have heavy exposure to commercial aviation, and the devastation wrought on that industry by the COVID-19 pandemic has significantly scaled back the outlook for aircraft deliveries over the short and long terms. Nevertheless, there's still an investment case for each of their stocks.

There's no way of getting around the fact that both companies' prospects will be heavily influenced by the demand situation for commercial aircraft in the coming years. That's what they have in common, but there are two key aspects to consider:

Hexcel traditionally generates around 70% of its revenue from commercial aerospace, with Boeing and Airbus responsible for 87% of it in 2019. Moreover, since there's very little aftermarket demand for the company's carbon fiber and composite technology in airplanes, it's fair to say that Hexcel really is a play on new commercial aircraft deliveries.

Having such exposure is obviously problematic in today's market for three reasons:

In fact, some of these issues are already apparent in Hexcel's earnings. For example, for the third quarter, it reported a whopping 67% decrease in commercial-aerospace-based sales. "Build-rate reductions driven by the COVID-19 pandemic combined with significant supply chain inventory destocking led to the reduced sales levels," management said.

It gets worse. Hexcel's industrial-based sales (largely composites for wind power turbines) normally generate around 13% of its revenue. Sales into that market were down 36% in the third quarter. Wind turbine manufacturers are increasingly outsourcing blade manufacturing to third parties. In response, Hexcel announced its intent to close a production plant in Colorado in November.

All told, Hexcel is heavily dependent on the construction and sale of new aircraft, and that's a business fraught with uncertainty right now.

Obviously, Boeing's prospects are also firmly linked to commercial aircraft demand. Furthermore, in common with Hexcel, the company had high hopes for a cycle of wide-body jet replacement that was on track to begin in 2020 -- hopes now dashed by the pandemic. As such, it's no surprise to see that prices of the two stocks have been highly correlated ever since it became clear to Wall Street that COVID-19 was becoming a global crisis. For reference, a correlation of 1 means their movements track each other perfectly. 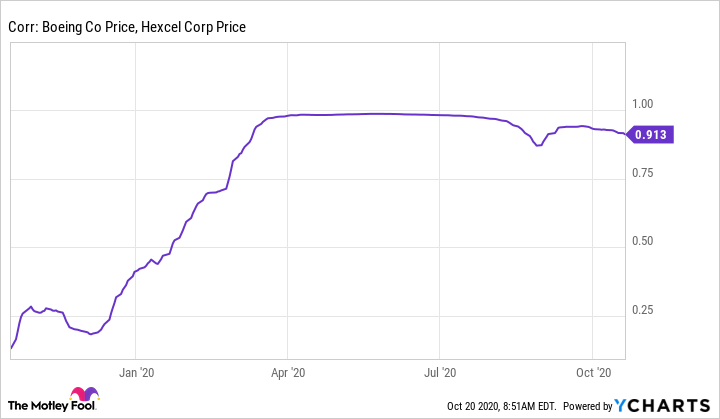 However, the difference is that Boeing also a significant services business that will support it even when demand for new aircraft is sluggish. For reference, Hexcel also sells into the defense and space market, and its share of sales is similar to that of Boeing's.

Boeing's recent commercial market outlook (including the forecast services demand) seems optimistic, so some caution is advised before penciling in earnings estimates based on it, but that doesn't mean the company can't still grow earnings.

All told, if you are looking for a way to play a recovery in aircraft deliveries, Boeing is probably a better all-around investment. Hexcel is exposed to more risk, has a structurally challenged industrial business, and there is uncertainty around its medium-term growth drivers.

Boeing also contains risk, but whichever way the market recovers, Boeing will benefit. Meanwhile, over the medium to long term, Hexcel will need to see a market recovery, an improvement in wide-body sales, and the ongoing development of new aircraft models.