With 11 coronavirus vaccine candidates in phase 3 clinical trials and six already cleared for limited use, the focus on trial results will soon give way to logistical concerns. As vaccines are authorized by regulatory agencies like the Food and Drug Administration, plans will kick into gear to get hundreds of thousands -- even millions -- of doses of each vaccine distributed around the globe. While governments have pumped billions of dollars into vaccine development and manufacturing, the bottleneck in supplying the world with these COVID-19 preventatives will rest on companies that have rarely been mentioned so far during the pandemic.

News about familiar names like Moderna, Pfizer, and Johnson & Johnson will give way as the makers of specialty glass vials and test tubes, such as West Pharmaceutical Services (NYSE:WST) and vaccine refrigerators, like Thermo Fisher Scientific (NYSE:TMO) try to ramp up production to meet demand. Dr. Rick Bright, who was leading the Biomedical Advanced Research and Development Authority (BARDA), warned in a May whistleblower complaint that it could take two years for the U.S. to procure enough vials to vaccinate Americans. This projection doesn't even account for additional requirements to support annual dosing. Even when enough containers do exist, nearly 3 billion people in the world live in areas where temperature-controlled storage is lacking. 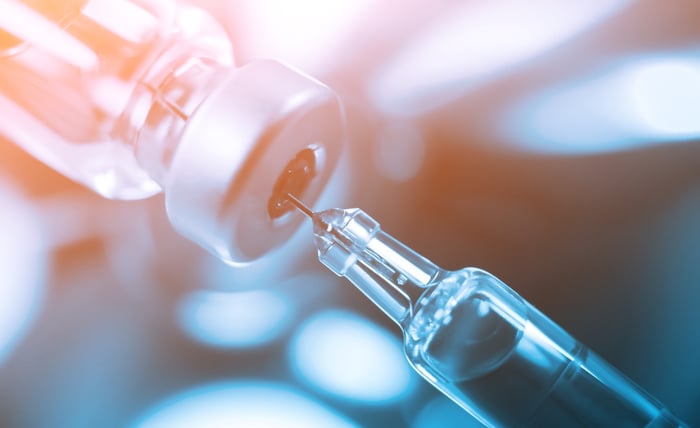 Vaccines require glass for storage because of its impermeability -- even high-grade plastic vials allow in some air, which can affect vaccine stability. And the vials must be sterile. In 2019, the global pharmaceutical industry purchased 12 billion vials -- an almost unfathomable number. Add in the global demand for billions of doses of coronavirus vaccine and you can see the dilemma unfolding. To address this, BARDA funded Corning (NYSE:GLW) to the tune of $204 million for up to 164 million vials per year, as well as a maker of glass-coated plastic containers. The world's largest maker of specialty glass, the German company Schott AG, has offered resources once it becomes clearer which vaccine candidate will emerge as the leader.

The biggest winner in the need for vaccine supplies might be West Pharmaceutical Services. The company, based in Pennsylvania, has 25 manufacturing sites around the globe; those manufacture vials, test tubes, stoppers, and other critical (yet often overlooked) equipment. Sales are also globally diverse; the company gets 48% of its sales from the Americas, 44% from Europe, the Middle East, and Africa, and 8% from the Asia Pacific region.

Kept in the cold

One critical component of the vaccine supply chain will be keeping vaccines refrigerated until they can be administered. Medical refrigeration is lacking in central Asia, much of India, a portion of Latin America, and almost all of Africa. The vaccines most likely to be offered by the World Health Organization's (WHO) collaborative need to be stored at two to eight degrees Celsius. Pfizer's vaccine candidate needs to be kept at or below minus 70 degrees Celsius, a temperature even most medical refrigerators in the U.S. and Europe can't reach. To address this, Pfizer has developed its own special carrying case for its vaccine. International organizations have helped to supply developing countries with tens of thousands of solar-powered vaccine refrigerators over the years. Despite this, there is still a lack of dependable electricity, good roads, and mobile refrigeration in many areas.

Transportation, even in the developed world, presents several hurdles. Container ships are also not equipped to keep vaccines refrigerated for long periods of time. This can be overcome by air shipments; however, that method is expensive and DHL estimates that supplying the world with a COVID-19 vaccine would take 15,000 flights. If true, that would severely strain the availability of both cooling materials and aircraft.

Thermo Fisher Scientific will benefit from the need for more vaccine refrigerators around the world. As one of the leading makers of the specialty devices, Thermo Fisher could be to freezers what Cisco was to servers over the last 20 years. In anticipation of globally distributing hundreds of millions of doses of vaccine, logistics company United Parcel Service is building "freezer farms" near its hubs in Louisville, Kentucky and Venlo, Netherlands. The farms will house 600 freezers able to store vaccines as low as minus 80 degrees Celsius. The company is planning additional farms in Germany, South America, and the U.K. For its part, DHL Global Forwarding recently opened a similar facility in Indianapolis, Indiana.

With its lack of participation in the WHO's global vaccine initiative, the U.S. is charting its own course for vaccine distribution. Shortages of protective equipment early in the pandemic led to much higher infection rates for healthcare workers who were not properly equipped. Many experts fear a repeat of the chaos in the spring, when mayors, governors, and healthcare leaders competed against each other for needed supplies. Without a nationalized, centralized approach, many areas were overstocked with equipment while locales in need faced shortages.

Early pacts with glass suppliers, and the involvement of logistics experts from the U.S. Department of Defense, are an attempt to get ahead of the wave. While no military personnel will be involved in transporting doses, they are lending expertise to the appropriate agencies. This go-round, a centralized operation will be able to track every dose of an approved vaccine as it moves through the country to inoculate Americans. Other stakeholders are also signaling readiness. Due to the constraints on glassware, the FDA could be flexible about rules requiring additional approval if the container is different from that used in clinical trials. Moderna, which makes one of the leading vaccine candidates, is exploring both single-use and multiple-use vials, according to regulatory filings. This would increase the number of doses that could be administered nationally.

Although the current administration decided not to invoke the Defense Production Act earlier in the pandemic, whoever occupies the White House in the months ahead might use the law to expand supplies of needed materials. Regardless of how distribution happens, or when, the products supplied by West Pharmaceutical and Thermo Fisher will be in demand for at least the next few years, and potentially beyond. Despite being off the radar so far, these healthcare equipment suppliers are about to play a critical role in vaccinating the globe and investors would be smart to pay attention.