Investors in Apple (NASDAQ:AAPL) have a love-hate relationship with the iPhone. On one hand, the iPhone is the product that catapulted Apple onto becoming a $1 trillion and then a $2 trillion company.

On the other hand, investors tend to focus almost exclusively on smartphone sales, even though the iPhone only makes up about half the Apple's sales today. The market didn't react very well back in 2018, when Apple said it would no longer be disclosing iPhone units sold, and Friday's sell-off following Apple's earnings report could be attributed to weaker iPhone sales ahead of the iPhone 12 launch, even though the company beat both revenue and EPS expectations.

With the iPhone still the star of Apple's show, some investors could be nervous that recently released third-quarter numbers showed Apple being overtaken as the third largest global phone vendor. Here's who unseated Apple, and what investors should think. 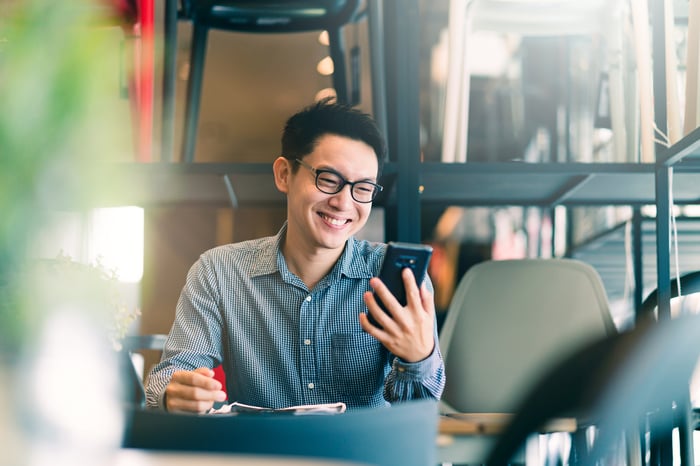 Research firm Canalys recently released its numbers for global smartphone shipments in the third quarter of 2020. Although global units were down 1% year over year, the third quarter saw a big 22% sequential jump as much of the developed world attempted to come out of coronavirus lockdowns.

During the quarter, Apple fell from third place in units sold to fourth place, as Chinese smartphone vendor Xiaomi (OTC:XIACY) surged past the U.S. phone-maker in a big way. During the third quarter, Xiaomi's units grew a whopping 45% to 47.1 million units, as Apple's units fell 1% to 43.2 million units. While the news is no doubt a positive for Xiaomi shareholders, there are a number of reasons Apple shareholders shouldn't panic, either.

Though it still held on to second-place with 51.7 million units, behind first-place Samsung at 80.2 million units, Huawei probably felt the pinch from recent September U.S. sanctions, which cut off shipments of key U.S.-made semiconductors and other semiconductors made with U.S. equipment. Also probably helping matters was Xiaomi's heavy emphasis on online distribution, as fewer people visited physical stores in China, India, and Europe. Huawei's China market share fell from 44.3% to 41.2%, and its shipments to Europe fell 25%, while Xiaomi gained in both regions.

Apple didn't have a 5G phone in the market

It should also be noted that the top three vendors all had 5G phones out in the market in the third quarter except Apple. Apple's first 5G phone, the iPhone 12, wasn't released until October, later than its usual September launch. Meanwhile, Xiaomi had launched its low-end affordable Redmi 5G phone as well as its higher-priced flagship Mi 10 Ultra back in early August.

Apple's lack of a 5G phone likely held back its results in Q3 as consumers looking to upgrade waited for the iPhone 12 release.

Apple doesn't need to be the market share leader

Finally, while units sold certainly matter, Apple doesn't need to shoot the lights out in terms of units sold in order to have a successful 5G cycle. Thanks to its brand power and vertically integrated platform, Apple is able to charge higher prices and keep costs in check, affording it outsize margins relative to its rivals. Though Apple has never been the largest smartphone vendor in terms of units, its premium phones have traditionally given Apple a stunning two-thirds of global smartphone profits.

Xiaomi has a different market segment, as it has pledged to always have the best phone for the value and never make more than 5% net margins on its hardware. As such, it tends to attract more of a price-sensitive segment of the global population. Meanwhile, Apple's outsize share of well-to-do consumers worldwide allows the iPhone giant to benefit from high margins, as well ancillary services from big spenders.

Xiaomi's passing of Apple says more about the position of Huawei than it does Apple. If U.S. sanctions stick around and Huawei continues to lose customers, it's really a plus for all of the other smartphone vendors, since Huawei had occupied such a large second-place market share prior to U.S. sanctions and the launch of 5G.