Investors on the Robinhood platform have become known for their willingness to take on risk. Airline stocks, cruise ship stocks, and other high-risk investments are often on the Robinhood Top 100 list. The commission-free trading platform is easy to use, and some argue that it may encourage too much trading. Certainly, making bets on risky businesses is easier than ever before. However, there are some stocks that even Robinhood investors may want to think twice about holding in their portfolios right now.

Moderna (NASDAQ:MRNA), Boeing (NYSE:BA), and ExxonMobil (NYSE:XOM) are three vulnerable stocks in the Robinhood Top 100 list that could fall sharply in price. Here's why you could incur significant losses from holding them in your portfolio:

What's made Moderna a hot buy this year is the progress the company's been making in developing a vaccine for COVID-19. Year to date, its shares are up more than 260%, dwarfing the S&P 500's 9% returns. In October, the company finished enrolling participants for its phase 3 trial of its vaccine candidate mRNA-1273. There's a lot at stake for Moderna if mRNA-1273 is successful, with CEO Stephane Bancel stating, "I believe that if we launch our COVID-19 vaccine, 2021 could be the most important inflection year in Moderna's history." While it's true that a successful vaccine would instantly add notoriety for a company that's yet to develop an approved drug, it's also by no means a guarantee that the trial will be successful. And with news coming out this week that Pfizer's vaccine with BioNtech is potentially up to 90% effective in preventing COVID-19, there's even more pressure on Moderna to release positive results of its own -- soon. 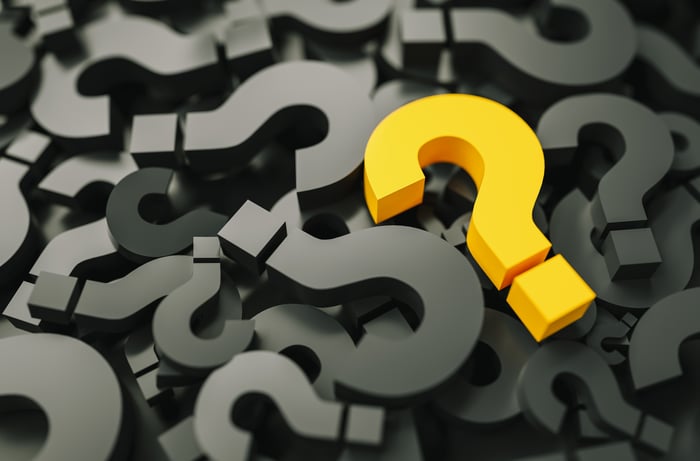 Through the first nine months of the year, the Massachusetts-based company's revenue totaled $232.7 million, which is five times what it recorded a year ago. However, that's primarily due to grants totaling $187.5 million, which came mainly from the U.S. government to fund the company's vaccine efforts. Its collaboration revenue of $45.1 million is up 20% year to date, but that's minimal when you consider that even the company's general and administrative costs of $109.3 million are well in excess of that. And with Pfizer's potential vaccine not too far away, it's uncertain if Moderna will continue to obtain funding from Operation Warp Speed to continue with the development of mRNA-1273.

Moderna needs mRNA-1273 -- or something else -- to build around, especially now that it looks like it might not be long before Pfizer's offering obtains emergency use authorization from the U.S. Food and Drug Administration (FDA). Moderna does have other drugs in its pipeline, most notably mRNA-1647, a vaccine for cytomegalovirus (a herpes virus) that, if approved, could bring in $5 billion in annual revenue. However, phase 3 trials for that likely won't start until 2021.

The important takeaway here for Robinhood (and all) investors is that there are no sure things in Moderna's portfolio that it can fall back on if mRNA-1273 fails or the vaccine isn't able to get to the finish line quickly enough (especially since Pfizer's vaccine is looking like it may already be there). And if that happens, the healthcare stock could come crashing down. It's a risky stock, and there are better vaccine stocks Robinhood investors can buy instead of Moderna.

Boeing is an intriguing buy if you're a contrarian investor and a very big risk-taker. Shares of the aerospace stock are down more than 50% this year as the coronavirus pandemic has put a big wrench into travel plans for businesses and consumers alike, hurting the demand for airplanes. Management expects that the demand for new planes will fall by 11% over the next 10 years. That would mean about a $200 billion cut from their forecast last year, when they was projecting the demand for the next decade to be worth an estimated $2.9 trillion.

The Illinois-based company manufactures more than just planes, but prior to this year, that was where the bulk of its revenue came from. On Oct. 28, it released its earnings for the period ending Sept. 30, and for the first nine months of this year, commercial airplane revenue of $11.4 billion was down 54% from the prior-year period. It also made up just 27% of revenue compared with the previous year, when 42% of Boeing's sales came from commercial airplanes. Year to date, Boeing has incurred losses of $3.5 billion in 2020, compared with a profit of $374 million during the same period last year.

The danger for Robinhood investors here is that, the longer the pandemic goes on and the worse the recession becomes, the more those issues will impact Boeing's business. Aerospace is key to the company's health, as is evident by its losses this year. And if COVID-19 cases continue rising, that could make the outlook for the airline industry even worse, which could send shares of Boeing tumbling even further down.

The oil and gas industry is in a similar boat to the airline industry right now. If people aren't traveling due to the pandemic, they're not using oil, and the lack of demand is adversely affecting ExxonMobil's business. On Oct. 30, the Texas-based company released its results for the third quarter, for the period ending Sept. 30, and revenue of $46.2 billion was down 29% year over year. ExxonMobil also reported a loss of $680 million, compared with a profit of $3.2 billion in the same period last year. Through the first nine months of 2020, the company's sales totaled $135 billion, which is a year-over-year decline of 32%. Its losses of $2.4 billion during that time are nowhere near the $8.7 billion profit it generated a year ago.

One positive to note is that year to date, its cash from operating activities is a positive $10.7 billion -- but that's also less than half of the $23.4 billion ExxonMobil brought in from its day-to-day operations a year ago, and it's less than the $11.2 billion it paid out in dividends in 2020.

Despite the current economic challenges, ExxonMobil continues to pay a dividend, which today yields a whopping 10.5%. The stock is still a Dividend Aristocrat, with the company having increased its payments for more than 30 years in a row, but given the uncertainty that lies ahead for ExxonMobil, it's by no means a safe income investment today.

With the coronavirus pandemic still surging throughout the country, Exxon's results aren't likely to get much better anytime soon. And that could put both its dividend and its share price in danger.

Should you buy any of these stocks?

Of the three stocks listed here, only Moderna is in positive territory this year: 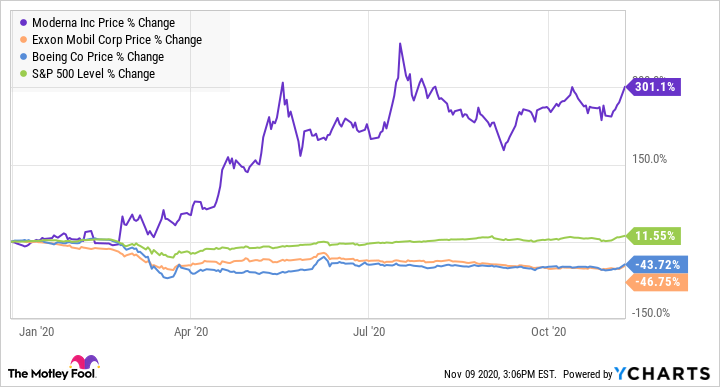 However, if Moderna's vaccine candidate isn't successful in phase 3 trials or it takes too long to obtain emergency use authorization from the FDA, that could wreak havoc on its share price. Pfizer looks to be well ahead of Moderna in the vaccine race at this point, and investors could just jump onto its bandwagon instead.

Boeing and Exxon, meanwhile, are looking at long roads to recovery that will depend on the pandemic and how long it'll take for the economy to bounce back. In Exxon's case, it also needs oil prices to rise. West Texas Intermediate, a key North American benchmark, currently trades at about $40 per barrel, whereas a year ago it was close to $60. And there's little reason to expect the price of oil will rise anytime soon.

Robinhood investors looking for great returns should consider investing in some better growth stocks than the ones listed here.