Shares of Moderna (NASDAQ:MRNA) were vaulting 9.3% higher as of 3:24 p.m. EST on Wednesday. The big gain came after the biotech announced interim data from an early stage clinical study evaluating its personalized cancer vaccine mRNA-4157 in combination with Merck's cancer immunotherapy Keytruda.

Moderna's interim results were from an expansion cohort of its ongoing phase 1 study that included 10 patients with HPV-negative head and neck squamous cell carcinoma (HNSCC) and 17 patients with micro-satellite stable colorectal cancer (MSS-CRC). Two of the HNSCC patients who received the mRNA-4157/Keytruda combo achieved a complete response with no cancer detected. Three other HNSCC patients achieved partial remission. 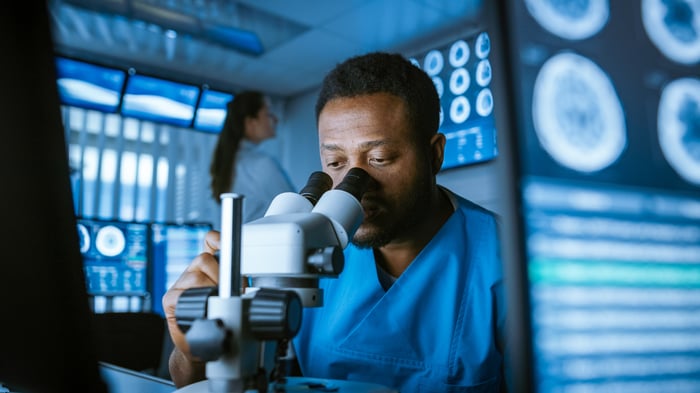 The company stated that the data obtained so far show that mRNA-4157 is well tolerated. Adverse events that have been reported in the study were typically of a low severity level and reversible. The only negative with Moderna's interim results was that no responses were observed in the patients with MSS-CRC who received the mRNA-4157/Keytruda combo.

These results should increase investors' confidence in Moderna's pipeline beyond its COVID-19 vaccine candidate. The company has four other clinical-stage mRNA candidates targeting cancer, including another experimental cancer vaccine in phase 1 testing.

Moderna will now expand the size of the cohort of HNSCC patients in the phase 1 study of mRNA-4157 and Keytruda. The big story for the biotech stock, though, remains its coronavirus vaccine candidate mRNA-1273. Moderna expects to have enough safety data to file for FDA emergency use authorization for the experimental vaccine later this month.