Shares of Kensington Capital Acquisition (NYSE:KCAC) jumped 18% at the open Friday after the special purpose acquisition company, or SPAC, said its pending merger with QuantumScape is nearing completion. QuantumScape is an early-stage company with a lot of potential and a lot of uncertainty, but investors appear excited by the chance to own its shares.

Kensington Capital was formed earlier this year as a so-called blank-check company, which is a shell that goes public and then merges with an existing business. SPACs have been a popular route to the public markets this year, with Virgin Galactic Holdings, DraftKings, and Nikola among the companies that have gone public that way in the last 12 months. 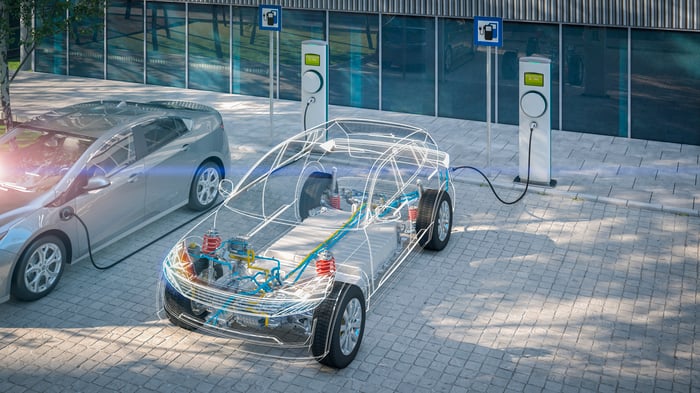 Kensington in early September announced plans to merge with QuantumScape, which is working to develop a solid-state lithium-metal battery for electric vehicles and other applications. In theory, solid-state designs hold a lot of advantages over the lithium-ion batteries now in use because they are more stable and offer greater energy density than what is available today.

The higher density should mean more miles per charge, and with fewer batteries needed, it should reduce the weight of electric vehicles. But for all the potential in solid-state batteries, it has proved tricky to try to commercialize them.

Investors seem to have an appetite to accept the risk that comes with this nascent technology. The shares are up on Friday after Kensington Capital announced that shareholders will be asked to vote on the merger on Nov. 25, meaning the deal could close in the weeks to come.

One needs to look no further than what has happened with Nikola to see the risks that come with investing in early-stage technologies via a SPAC. That said, there is a lot to like about QuantumScape.

Bill Gates is an investor, as is one-time Tesla (NASDAQ:TSLA) chief technology officer J.B. Straubel, who is on QuantumScape's board. Straubel has said he believes "the company has an opportunity to redefine the battery landscape."

Perhaps most important, QuantumScape counts automaker Volkswagen (OTC:VWAGY) as both an investor and a customer. Volkswagen wants to be a leader in electric vehicles, creating a huge potential market for QuantumScape batteries.

Assuming all goes to plan, QuantumScape will soon trade on the New York Stock Exchange under the ticker QS. It's still early days, and some caution is warranted, but there is good reason for investors to be excited.