Machine vision company Cognex (NASDAQ:CGNX) is definitely not a company that looks cheap at first glance. Trading at 67 times current earnings, it's hard to make the case that the stock is a great value from where it will be in the next year or so. Instead, investors should focus on the long-term growth prospects for the company and its potential to grow its current $800 million in sales within its total addressable marketplace of $4.2 billion. In this context, let's take a look at whether Cognex is a good value right now.

The company's machine vision solutions are used to help automated processes in manufacturing and distribution. For example, Apple (NASDAQ:AAPL) is Cognex's biggest client, and it's likely that Cognex's machines are used to inspect and monitor the assembly of screens on Apple's phones. 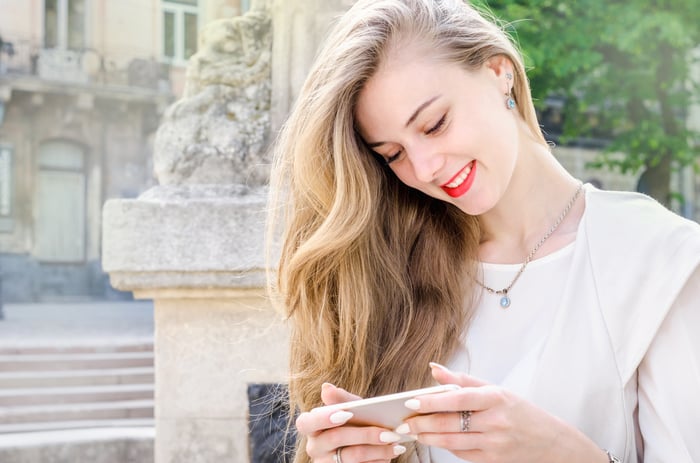 Indeed, Apple has been Cognex's biggest customer in recent years, accounting for 20% of revenue in 2017 and 15% in 2018. However, according to Cognex's SEC filings, "The curtailment of purchases by this customer represented a significant portion of our total revenue decrease in 2019 from the prior year."

The case for buying Cognex

Aside from consumer electronics, Cognex's other major end market and its traditional strength is in the automotive sector. Automotive manufacturers have long been early adopters of automation, so it's not surprising to see them have well-established relationships with Cognex. Together the consumer electronics and automotive end markets contributed around half of Cognex's revenue in 2019.

Unfortunately, both of these end markets declined in 2019, meaning that Cognex's 2019 revenue of $726 million was actually 5.2% lower than its revenue of $766 million in 2017. This fact helps highlight the inherent volatility in Cognex's growth path. 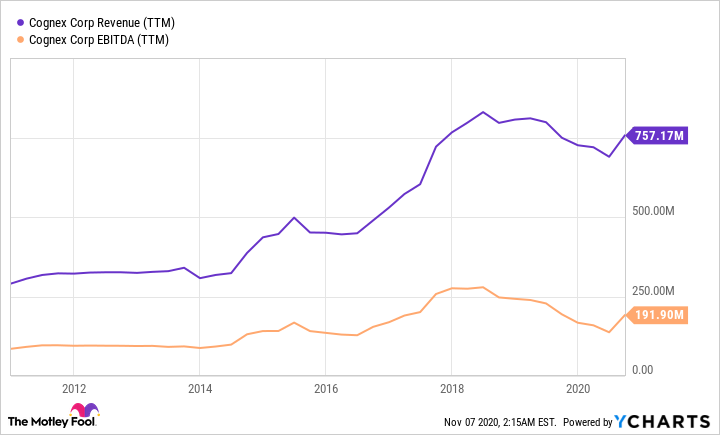 In a sense, you can think of Cognex as a company with four different revenue drivers. First, consumer electronics is a long-term grower, but Cognex's revenue will be volatile based on the capital spending and product development plans of Apple and others. A second driver is the automotive industry, where end demand is partly based on sales and production plans at the automakers. Third, Cognex is seeing very strong growth in its sales to the logistics industry, primarily to e-commerce fulfillment centers.

Finally, Cognex has an opportunity to expand machine vision sales to a host of the industries in line with the increased use of automation. These include life sciences, food and beverage, packaging, airport baggage handling, and more.

Putting all of this together, the bullish argument is that investors should accept the volatility in the company's earnings as an inevitable consequence of a growth company overshooting and then undershooting its long-term growth trend. As such, investors shouldn't dwell too much on the near-term earnings and valuation. Instead, the focus should be on the potential for Cognex to grow its sales within end markets that management believes will grow at a compound annual growth rate of 12% over the long term. Throw in the possibility of capturing market share, and Cognex has an opportunity to hit management's aim of 20% annual revenue growth.

To flesh out this argument, consider that Wall Street analysts are forecasting earnings per share (EPS) of $1.04 in 2020, putting the stock at 70 times 2020 earnings. Using that as a base and assuming Cognex grows earnings in line with revenue, the company could be generating $5.40 in the next decade and be trading on a mid-teens price-to-earnings ratio in 10 years' time.

Cognex is a very attractive company and its long-term growth drivers look very strong. Moreover, all it's going to take are a few "Apple-like" deals and the company's revenue and earnings could receive a major boost. As such, the stock deserves careful consideration in a growth investor's portfolio.

That said, the current valuation really is stretching the boundaries of what most growth investors would be willing to pay for the stock. Cognex may well have great long-term prospects but it still relies on the automotive industry, and there's no guarantee that, after a recovery in 2021, the industry won't stagnate or slip into low-single-digit growth mode.

Given the inherent volatility in its revenue growth, and uncertainty in its end markets, the stock doesn't look like a great value. This is based on the idea that, assuming 20% EPS growth in the next five years, the stock won't trade on less than 30 times earnings in the next half-decade. As such, at a price of $72 Cognex stock doesn't look like a great value. Cautious investors may want to wait for a significant dip before buying in.