Digital payment providers and "war-on-cash" stocks have been among the big winners during these very strange times as the coronavirus pandemic has accelerated the already rapid cashless trend. But one of the names that has slipped below the radar among all the highfliers in this area of fintech lately is American Express (NYSE:AXP).

While there are many great investment options among fintech companies, American Express might be the best value right now with a good long runway of growth ahead of it. Oh, and by the way, it is a top-five holding of Warren Buffett, chairman of Berkshire Hathaway, and a stock he's held for 27 years.

So, there's that. But here are some other reasons American Express is a stock to buy right now.

American Express is good value compared to its peers

American Express is a credit card company and a strong brand that has been around since 1850. As any cardholder will tell you, it's different from its larger competitors like Visa (NYSE:V) and Mastercard (NYSE:MA) in that it is its own financial network, so it doesn't issue credit cards using third-party banks to fund the transactions. Instead, it lends money to the card user itself and then requires repayment in full at the end of the month. 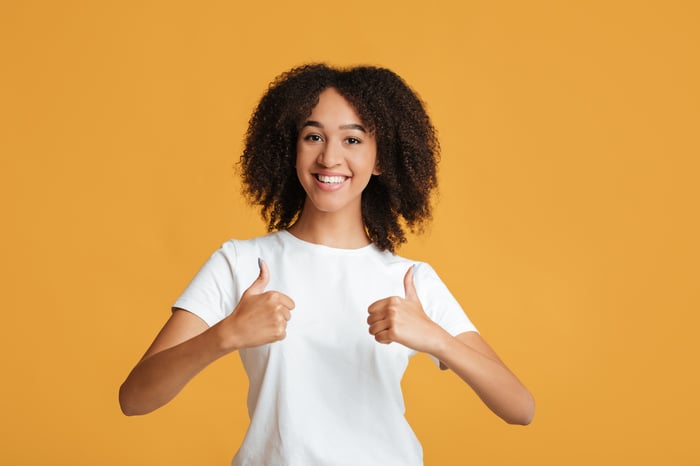 But like its competitors, it is a major player as the third-largest credit card company in the growing cashless trend. There are many statistics out there that show that society is gradually moving away from cash, with some experts predicting entire economies will be cashless by the end of the decade. There are huge growth opportunities for companies in this space, especially established ones like American Express.

One of the things that sets American Express apart from its competitors right now is its value. While valuations have spiked for other fintechs over the past year as people have flocked to technology stocks, American Express has a forward price-to-earnings ratio of 17, which is much lower than its peers. The stock price is down about 6% year to date as the company has been negatively impacted by the lower spending caused by the pandemic and recession. The big hurt has been travel spending, which has long been a big driver of revenue for the company and that has all but dried up.

But through it all, American Express has a return on equity of 15% and an operating margin of 14%, which means it is generating solid earnings from its equity.

There are a few reasons to be bullish on American Express. First, as mentioned earlier, the company is well established in a growing industry. Second, the pandemic will end (likely in 2021) and travel will return, as will consumer spending. On the company's third-quarter earnings call, CEO Stephen Squeri said there is a lot of pent-up demand for travel among American Express cardholders. Finally, the company is built on solid financials. As a bank, it has a common equity Tier 1 ratio of 16.1%, which is more than double the regulatory minimum. And it has sufficient liquidity with $33 billion in cash and cash equivalents -- up $9 billion from the end of 2019.

American Express used its capital strength to make investments last quarter, most notably acquiring fintech company Kabbage, a digital lender that provides loans to small businesses. American Express owns the digital platform, the technology, all of its products, data, and intellectual property, but not the company's loan book. Kabbage's technology automates the lending process with decisions made in minutes.

Company officials see the acquisition as an opportunity to build out its digital banking platform for small businesses, using the technology platform as a competitive edge. It may not generate huge profits right away, but over time this could be a differentiator for American Express and provide an additional source of profits in the long term.

While there are lot of good fintech stocks out there, few areas have the growth potential of those in the cashless space. American Express has the brand, the track record, and the growth potential to prosper for many years. And at this relatively low valuation, now's not a bad time to jump in.