Please ensure Javascript is enabled for purposes of website accessibility
Free Article Join Over 1 Million Premium Members And Get More In-Depth Stock Guidance and Research
By David Jagielski - Nov 26, 2020 at 6:15AM

A change in leadership at the White House could have a significant impact on how the overall economy and certain sectors perform. With different policies and priorities in place, some industries could perform better (or worse) than they had before. Cleaner energy stocks, for instance, could get a boost under President-elect Joe Biden, who brings a greater focus on climate change and the environment to the Oval Office. A new stance on the coronavirus pandemic could also help the economy recover more quickly. But that doesn't mean stocks have been struggling under President Trump. Teladoc Health ( TDOC -4.32% ), Square ( SQ -5.64% ), and Tesla ( TSLA -6.42% ) have all done exceptionally well over the past four years.

These stocks have been among the top-performing options in the market -- investing in any one of them before the 2016 election would've made you rich. Let's take a closer look and see if they're still poised for more growth under Joe Biden, or if investors should consider cashing out and capturing their gains today. 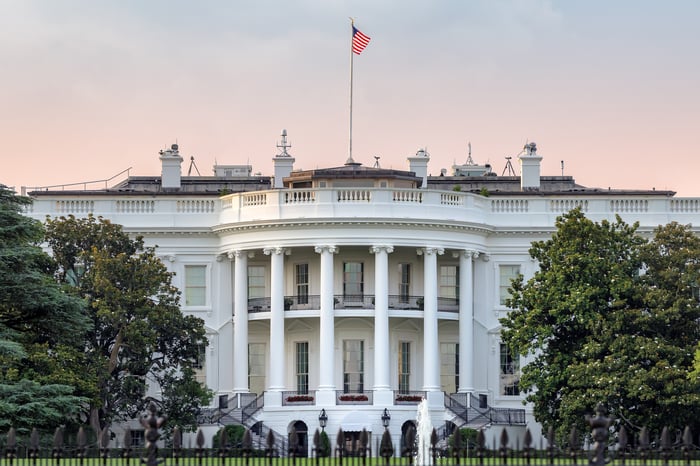 Shares of telehealth stock Teladoc are up over 1,000% during Trump's presidency, but many of those gains came this year, during the coronavirus pandemic. Entering 2020, the stock was up around 400% since the 2016 election. As more patients utilized telehealth visits this year, growing demand for Teladoc's services made it a hot buy in recent months. Through the first nine months of this year, Teladoc reported total visits of 7.6 million, a year-over-year increase of 163%. Sales of $710.6 million during that time were up 79%.

The coronavirus pandemic has been the catalyst behind Teladoc's growth this year. But I think that Joe Biden could accelerate the adoption of telehealth even further. The new president plans to spur the use of telehealth for specialty care and mental health with federal funding. In particular, Biden is looking to make it easier for veterans in rural areas to receive remote care. An expansion of the Affordable Care Act (ACA) is also on the agenda -- something that Trump has been less than been eager to do during his presidency.

While Teladoc may not grow at the same explosive rate that the company experienced this past year, there's still a lot of growth left for Teladoc, especially now that its merger with chronic care management company Livongo Health is complete. That will be sure to open up many more opportunities, including patients with diabetes who use Livongo's services to help manage the condition. There is currently a 25% overlap between the patients who use Teladoc and Livongo, so there is plenty of market left for the services to capture.

Year to date, shares of the healthcare stock are up 126%, wildly outperforming the S&P 500 and its 12% returns thus far.

Another company that's been soaring in recent years is Square. It offers convenient readers and terminals that make it easy for people to accept credit and debit without worrying about monthly fees. Much like Teladoc, Square has been growing since 2016. But the real surge came during the pandemic, as the need for cashless payment grew and people spent more and more money online.

One area where Square has seen significant growth has been through Cash App. The app makes it easy to transfer money between individuals but it can also be used for investing and to buy bitcoin. In the company's third quarter earnings for the period ending Sep. 30, which Square released on Nov. 5, the Cash App generated $2.1 billion in revenue, growing at a rate of 574% year over year. The growth related to bitcoin has been so significant that without the virtual currency, the Cash App's revenue would've totaled just $435 million.

Bitcoin has been the big driver for Square's business, and it will be key in determining the path of the stock next year. The price of the cryptocurrency is up 150% this year and has been rising since this month's election. President Trump hasn't exactly been a supporter of digital currencies, although he also hasn't been able to stop their growing popularity this year either.

It's unclear how Biden's policies may affect the market for bitcoin (and like with Trump, perhaps they won't at all), but crypto traders don't appear to be concerned with the change in leadership as they have been buying up bitcoin since the election. If the popularity of digital currencies continues to rise, Square could be a big benefactor, and its stock will likely build off the success it's achieved in recent years.

One of the hottest stocks of 2020 has undoubtedly is electric vehicle (EV) manufacturer, Tesla. Not only are its number of deliveries up, but the company is no longer unprofitable and sports a bottom line that's been in the black for five straight periods. The company's stock is finally going to join the S&P 500 Index in December.

Vehicle deliveries during the period ending Sep. 30 totaled 139,593, which was a year-over-year increase of 44% while its production numbers of 145,036 were up 51% from the same quarter last year. Even during the pandemic, Tesla's done a remarkable job of growing. Its year-to-date revenue of $20.8 billion is 21% higher than the $17.2 billion that Tesla brought in during the same period last year. But that's still a drop in the bucket compared to Ford Motor which has posted $106.9 billion in auto sales thus far in 2020, up 29% year over year. General Motors hasn't had as great of a year with its sales down 20% over the same period, but its year-to-date automotive revenue of $74.6 billion is still more than triple Tesla's top line. The cutting edge tech company still has a long way to go to find itself competing with the sales of long-time industry leaders.

But with improved results this year, investors have been bullish on Tesla's stock; the automaker's share price has risen more than 580% in 2020. Under Biden, Tesla looks to be an even surer buy. The new president will be focused on cleaner energy, plans to create new jobs in the auto industry, to hopes to "position America to be the global leader in the manufacture of electric vehicles."