Please ensure Javascript is enabled for purposes of website accessibility
Free Article Join Over 1 Million Premium Members And Get More In-Depth Stock Guidance and Research
By Jennifer Saibil - Dec 2, 2020 at 7:32AM

Sales have improved, and the company is aggressively courting greater market share.

Gap ( GPS -3.33% ) hasn't been a great investment over the past three years as its styles have fallen out of favor, but the stock has risen more than 50% year to date as investors have regained confidence in its comeback. Its third-quarter earnings report was impressive, showing strong results since the early lockdown phase of the pandemic. So, is it time to buy in?

Gap is the largest apparel-focused retailer in the U.S., with $16 billion in annual 2019 sales. But its growth has been patchy over the past few years, with solid results from the Old Navy brand and high growth from the Athleta women's activewear brand, but weak progress from both The Gap and Banana Republic chains, which were the height of popular fashion in their heydays.

It's also well behind competitors like Nike, with its $37 billion in 2020 annual sales.  While Nike is classified as an athletic apparel and footwear player, it has to be viewed as a direct challenger to general apparel retailers given the rising popularity of athleisurewear for everyday use. 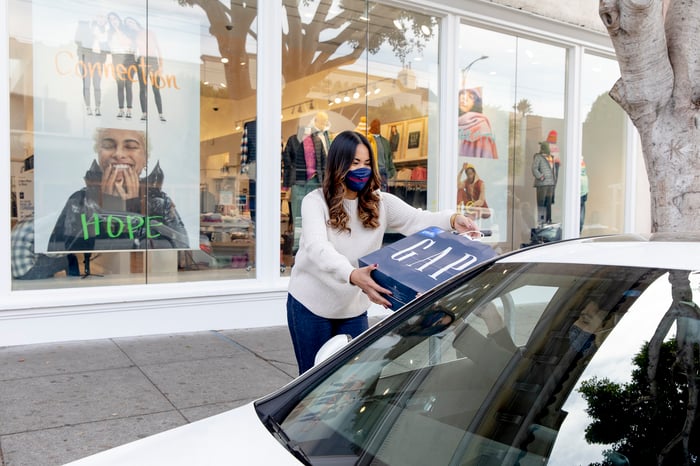 Gap's sales figures slid sharply during the early months of the pandemic, but they've been bouncing back fast. In the company's fiscal third quarter, which ended on Oct. 31, net sales were flat year over year, and comps were up 5%. Digital sales increased 61%, and its online channel had 3.4 million new customers, a 145% increase over the prior year.

As usual, Old Navy and Athleta posted the company's best performances, growing by 17% and 35%, respectively. The Gap brand's sales declined 5%, and Banana Republic's fell 30%. However, in fiscal 2019's third quarter, three of its brands posted declining comps, and Athleta's comps were only up 1%, making Q3 2020's results a refreshing improvement.

Banana Republic is the company's most challenged brand, as a large fraction of its fashions are designed to be worn to the office. Even before this year, casual wear had become de rigueur in many workplaces, but tens of millions of Americans are still working from home as the pandemic reintensifies, so the market for office wear has only continued to shrink.

The other less-than-positive news for Gap was on the profitability front. Its bottom line was under pressure as the company energized its marketing last quarter to strengthen sales. However, it still improved year over year.

So far in her tenure, CEO Sonia Syngal has been relentless in her efforts to turn the company around and make lasting changes. For starters, her team is closing a net of 225 Gap and Banana Republic locations in 2020 as mall stores have become less relevant.

Gap also announced two new C-level hires on Tuesday. Asheesh Saksena will fill the newly created position of chief growth officer, tasked with finding ways for the retailer to maintain and accelerate its momentum. And Sandra Stangl will become the CEO of the Banana Republic brand. She has years of experience at Williams-Sonoma and the former Restoration Hardware, now RH, both of which are  successful companies that (like Banana Republic) are focused on premium goods.

Gap is also strengthening its already-robust digital program. E-commerce accounted for 40% of fiscal third-quarter sales, and the company is bringing out improved digital shopping features such as dedicated pickup and return hubs at Old Navy and Athleta. It recently added PayPal ( PYPL -3.01% ) as a payment option, and is working with Afterpay to provide an interest-free installment payment option. It offers buy-online-pickup-in-store and curbside pickup service at every U.S. location, and it recently added doorbell buttons so customers can easily alert store workers when they arrive for pickups.

Gap is making the right moves, and the results are clear in its higher sales numbers. However, it still has some work to do. The Gap brand itself consistently underperforms, and it makes up a hefty 25% of total sales.

Meanwhile, Banana Republic has been a drag on sales for years. The choice of Stangl to lead it looks promising, but Gap's various chains and the entire company have shuffled through CEOs repeatedly in recent years as the board searches for leadership with the right vision to reinvigorate the company, to little avail. It will be a challenge to reinvent the Banana Republic brand to meet new trends.

What I'm most worried about is the company's focus on logistics at the expense of identity. Gap has been a leader in e-commerce for a long time, and that's proving advantageous in the pandemic environment. But the company needs to give customers more compelling reasons to come back, whether online or to its stores.

In all, while there's been a lot of progress, it needs to translate into solid results in the areas of concern. Until then, I would hold off on buying Gap stock.