Shares of prescription-drug coupon company GoodRx Holdings (NASDAQ:GDRX) fell 22.1% in November, according to data provided by S&P Global Market Intelligence. The stock went down a little in the days following the release of its third-quarter results. But it plummeted when Amazon announced the launch of its pharmacy business.

On Nov. 12, GoodRx released its third-quarter earnings report, its first quarterly report as a public company. Revenue was up 38% year over year to $140 million, resulting in a net loss of $50 million. Both of these numbers were better than analyst expectations. However, the stock likely pulled back because of its rich valuation. While 38% top-line growth is great, it traded for over 40 times sales at the time. This growth rate is arguably too slow to support that much of a premium valuation. 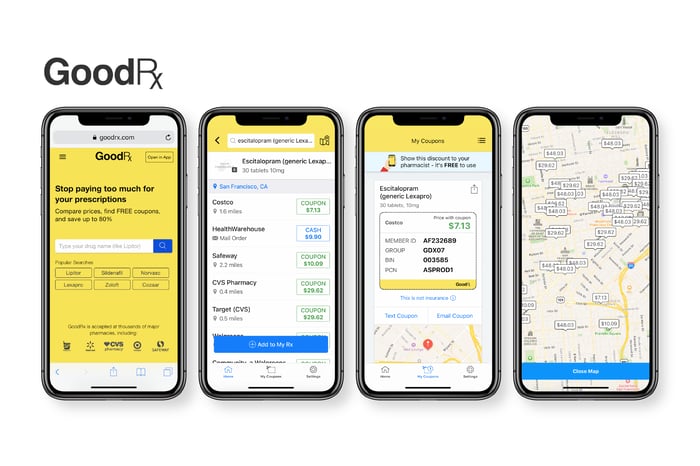 But the big drop for GoodRx stock came after Amazon announced Amazon Pharmacy. The new service from the e-commerce giant has consumer benefits similar to those of GoodRx. Amazon Prime members will be able to get discounts on prescription drugs and pick them up at physical pharmacy locations that are partnering with Amazon.

Some believe Amazon Pharmacy is bad news for GoodRx shareholders in the long term. But GoodRx CEO Doug Hirsch was quick to go on CNBC and say, "I don't think it's material to us at all." From Hirsch's perspective, there's a very limited scope to Amazon's discounts, and GoodRx can get users a better price 90% of the time.

One thing's for sure: If GoodRx survives increased competition from Amazon, it won't be the first company to do so. While Amazon has undoubtedly caused competitors to go under during the past two decades, there are a handful of thriving companies that at one point saw their stocks plummet on fears over Amazon's competition.

Maybe Hirsch is right, and GoodRx will continue to grow in this space. But it does highlight something investors should keep in mind. When we research stocks, we're looking for enduring competitive advantages. Based on how the market reacted to the Amazon news, it would appear few investors believe GoodRx actually has a competitive advantage. Therefore, before buying shares, investors should be looking for reasons GoodRx can thrive over the long term.