Please ensure Javascript is enabled for purposes of website accessibility
Free Article Join Over 1 Million Premium Members And Get More In-Depth Stock Guidance and Research
By Keith Noonan - Dec 2, 2020 at 8:54AM

The market-crushing electric-vehicle stock is up roughly 580% year to date.

Shares of Tesla ( TSLA -0.59% ) soared 46.3% in November, according to data from S&P Global Market Intelligence. The electric-vehicle (EV) leader notched another month of impressive gains, with news that the company would be included in the S&P 500 Index and momentum for the broader market acting as positive catalysts for the stock. 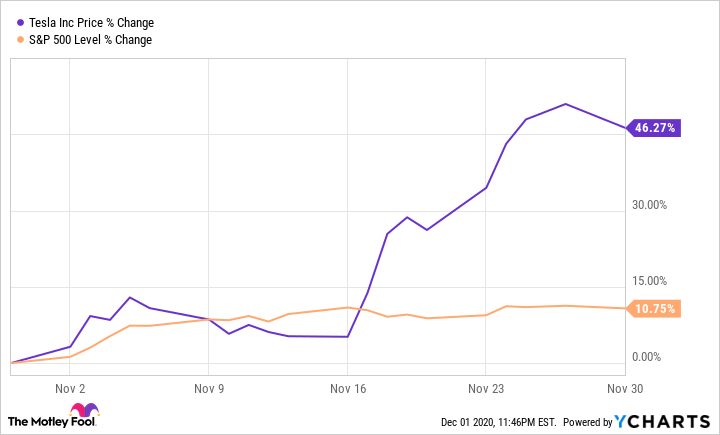 S&P Dow Jones Indices announced on Nov. 17 that Tesla would be added to the S&P 500 in December. The auto stock climbed following the news and managed to set a new lifetime high last month. What's next for Elon Musk's market-shaping company? 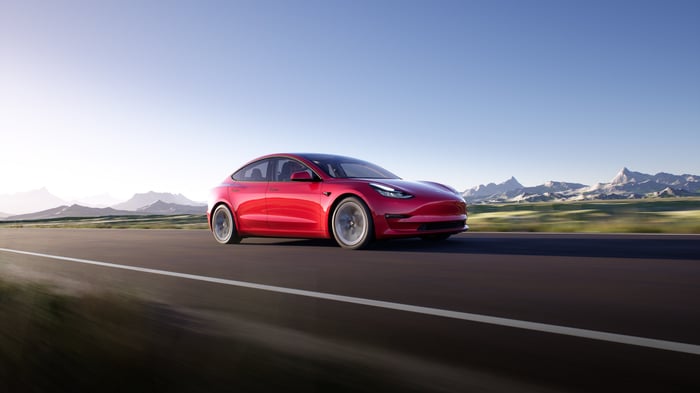 Tesla posted blockbuster third-quarter results in October, and the November rally for the broader market combined with the announcement of the company's inclusion in a major index helped create conditions for another month of huge gains for the stock. Being added to the S&P 500 (or other major indexes) often creates bullish pricing momentum.

When investors buy exchange-traded funds or mutual funds that track the S&P 500 index, they'll also be buying shares of Tesla. Index-tracking funds also have to buy the stock initially in order to stay current. Tesla will be added to the index before the market opens on Dec. 21.

Shares likely also got a boost from positive analyst coverage last month. Morgan Stanley analyst Adam Jonas published a note upgrading his rating on the stock from equal weight to overweight and giving a one-year price target of $540 per share on the stock -- up from his previous target of $360 per share. Wedbush analyst Daniel Ives also published a note with a rosy outlook for Tesla over the next year, citing the company's industry-leading position and expectations for a surge in overall EV demand. Tesla expects that it will deliver 500,000 cars this year, and plans for increased spending on manufacturing suggest the company anticipates strong demand.

Tesla has continued to climb early in December's trading. The EV specialist's share price is up 2.6% in the month so far amid momentum for the broader market and news that the stock will be added to the S&P 500 index all at once instead of incrementally. 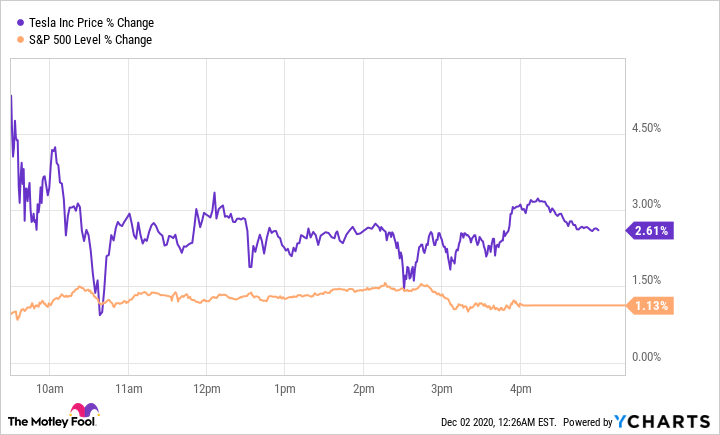 Many EV stocks have posted stellar gains this year as investors have scrambled to capitalize on what could be an explosive, long-term growth market. Tesla is posting strong momentum, and it's not as speculatively valued as competitors Nikola, NIO, and ElectraMeccanica Vehicles, but Elon Musk's company will have to withstand increased EV pushes from automotive giants including General Motors and Ford in addition to a surge of smaller, upstart competitors.

Tesla now has a market capitalization of roughly $554 billion and is valued at roughly 18 times this year's expected sales.