Today, most people in developed countries use credit cards and debit cards to purchase goods (especially when buying online), but according to Afterpay (ASX:APT), millennial and Gen Z shoppers have an aversion to credit cards and accumulating debt. So how will millennial shoppers choose to pay for their goods if they don't like plastic? Buy now, pay later payment solutions is one answer, and Afterpay is leading the push in this growing payment trend.

(One note as we get started: Afterpay primarily trades on the Australian Securities Exchange. It is available over the counter in the U.S., but those shares are lightly traded and too volatile to recommend. Consult with your broker to find out if Australian stocks are accessible to you. If not, consider choosing another broker that does offer international stocks.) 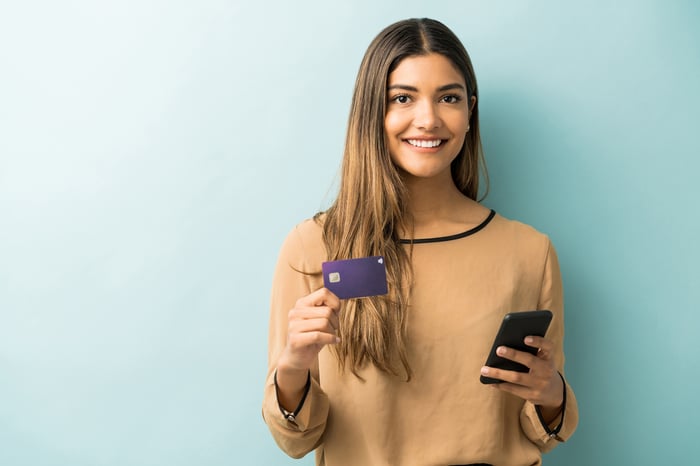 Afterpay is a financial technology company based in Sydney, Australia, that's focused on providing "buy now, pay later" payment solutions. Buy now, pay later is an alternative payment option that allows customers to pay for products with installment plans. For example, The Gap is an Afterpay partner, and consumers on The Gap's website can choose to check out with Afterpay which enables them to receive their product immediately but pay for it in installments over a six-week period.

How is buy now, pay later different from purchasing with a credit card? Afterpay doesn't charge interest on items purchased. If a customer makes all the payments on time, they do not pay a dime over the original purchase price. Afterpay does charge late fees for missed payments, however, late fees are capped at 25% of the original purchase price so consumers won't end up with huge debt burdens over time.

This all sounds great for the consumer, but how does Afterpay make money? It primarily makes money by charging merchants a processing fee of around 5%, which is higher than a standard payment processing fee but enables merchants to sell more volume than they would otherwise.

So, Afterpay is a win for consumers, a win for merchants, and, as we will see, a win for investors.

Given the strong value proposition for consumers and merchants, it shouldn't be surprising that Afterpay has been growing at a blistering pace. For its fiscal year 2020, the company reported 97% revenue growth, bringing the total revenue to 519 million Australian dollars. There are plenty of signs that the rapid growth will continue.

Afterpay has continued to add tons of new customers and merchants during the global coronavirus pandemic as people have been forced to shop online. The rapid growth of e-commerce this year has led to many shoppers discovering and embracing Afterpay.

Afterpay is now expanding into the U.S., U.K., and Canada, where it has posted even faster growth. Last year, Afterpay's U.S. gross merchandise value of sales grew 330%. The company also more than doubled its total number of shoppers from 4.6 million in 2019 to 9.9 million in 2020.

Afterpay isn't the only company showing strong growth in the buy now, pay later space. U.S.-based competitor Affirm Holdings recently filed to go public. Affirm managed to grow its total revenue 93% over the past year and noted in its IPO prospectus that buy now, pay later is among the fastest-growing segments of e-commerce.

The future of buying

Afterpay and its peers in the buy now, pay later industry are clearly onto something. Giving customers more flexibility and better financing terms compared to credit cards is a huge win for the consumer. Although buy now, pay later is still a small fraction of total e-commerce shopping volume, it has a lot of promise to become a meaningful share of online checkout.

Today, Afterpay is the leader in buy now, pay later based on its current share of global transaction volume. If the trend persists and Afterpay maintains its leading position, the company is poised for huge continued growth ahead, making it one of the most attractive fintech growth stories to watch in the coming years.