2020 has been the year of e-commerce. Stuck at home, consumers have had virtually no choice but to buy digitally. And change in the space has proceeded accordingly. While online shopping has come a long way over the past 20 years, one of the most interesting new innovations is the ability to buy now and pay later.

Companies such as Afterpay, Affirm, and Klarna have pioneered this model, each with its own approach. Affirm makes money by charging consumers a relatively high interest rate. Afterpay doesn't charge consumers interest, but charges merchants a higher payment processing fee. Consumers love the flexibility offered by buy now, pay later and the industry has been booming.

One interesting aspect to the development of buy now, pay later is the lack of participation from established financial firms and banks. However, with its eye on the prize of a large growth opportunity, PayPal Holdings (NASDAQ:PYPL) just threw its hat in the ring and is now offering the solution to merchants as well. 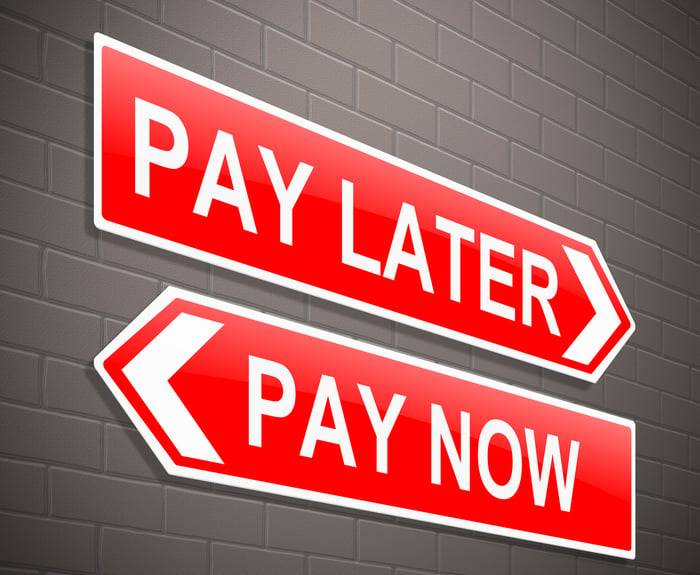 PayPal's approach to a buy now, pay later solution is its "Pay in 4" product. Pay in 4 allows a customer to pay for an item that costs anywhere from $30 to $600 in four installments over a period of six weeks. Customers pay no interest on any of these payments; a fee is only assessed if the customer is late on a payment.

So if PayPal isn't charging customers, how does it make money on the buy now, pay later model? By charging a processing fee to merchants -- which is the same way PayPal makes money from most other e-commerce transactions. PayPal charges merchants a fixed base fee plus 2.9% of the transaction value.

Afterpay and Affirm have slightly different business models. Afterpay is most similar to PayPal, but instead charges merchants about 5% of the transaction cost (although the exact percentage figure varies depending on the countries, geography, and specific deal negotiated). For Afterpay, consumers pay no interest expense but do pay fees if payments are late or delinquent.

Affirm charges a merchant fee but also charges interest to consumers ranging from 10% to 30%, based on the customer's creditworthiness. Despite its seemingly high fees relative to competing solutions, the company has been quite successful. Affirm recently filed for an IPO and reported $4.6 billion in revenue for its fiscal 2020.

Relative to the competition, PayPal has a compelling offering. It charges a lower fee to merchants compared to AfterPay and doesn't charge interest, unlike Affirm. However, PayPal is somewhat late to the buy now, pay later party. Afterpay and Affirm already have huge businesses and PayPal must now play catch-up.

PayPal is pushing into buy now, pay later because the model has obvious synergies with its existing lines of business. For context, PayPal already has 24 million merchant accounts and 281 million customer accounts. If PayPal can convince its millions of merchants and customers to use its buy now, pay later service, it will become a major player in the industry very quickly.

Also, PayPal doesn't want to be left behind. If consumers want to purchase using buy now, pay later and merchants find value in offering the payment method, then the company had better offer the solution or else it will lose customers. From PayPal's perspective, it doesn't care if customers pay with buy now, pay later or with cash; either way, PayPal receives a similar fee from merchants.

PayPal may have a winning formula here. The company already has a strong brand in e-commerce and payments, and has the expertise to offer such a service. In fact, PayPal's entrance into the buy now, pay later market is a great win for merchants because if they already do business with PayPal, adding the new offering is quite easy.

The markets have caught wind that buy now, pay later has huge potential. Afterpay's revenue has more than doubled in the past year to over $300 million, and its market cap is now over $20 billion.

What could PayPal potentially gain from this burgeoning market? Well, it depends on how much uptake the buy now, pay later product has. E-commerce is a huge addressable market, and even if just a small fraction of buyers ultimately pay with this method, it would be an enormous win for PayPal.