Shares of Lyft (NASDAQ:LYFT) skyrocketed 67.2% in November, according to data from S&P Global Market Intelligence. That move sent the ride-hailing stock from $23 per share to $38 during the month.

For context, Lyft shares are still down 11% for the year through November but were down more than 60% during the March lows due to the COVID-19 pandemic.

The big news for Lyft in November was the passage of the Proposition 22 ballot initiative in California. Prop. 22, as it's become known, gives certain gig economy companies an exemption from California's AB5 law. Essentially, AB5 would have required companies like Lyft and ride-hailing competitor Uber to treat the independent contractors that use its platform -- the drivers -- as employees and give them full benefits.

Prop. 22 allows Lyft's drivers to maintain flexibility as independent contractors and to receive certain benefits, but it's not the significant blow that AB5 would have been. Lyft believes Prop. 22 works well enough that it could serve as a model the company expands to other states. Lyft may have to raise prices to cover the higher costs associated with the new law, but it doesn't sound like that will have a meaningful or concerning impact on the company. 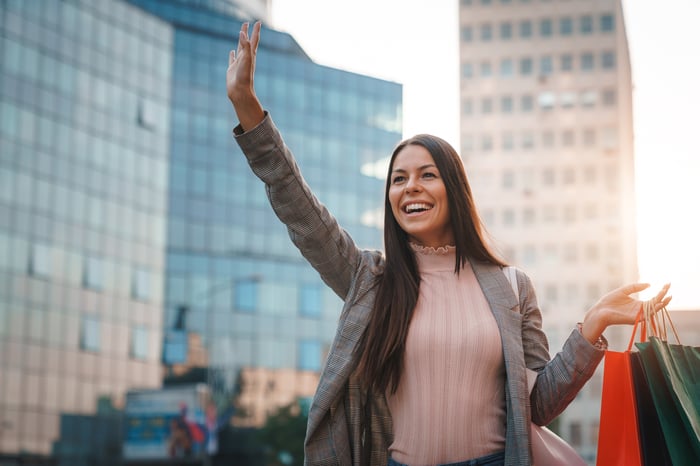 In addition, Lyft reported its third-quarter earnings in November. Clearly, the COVID-19 pandemic continues to wreak havoc on the company's business, with revenue down 48% versus the same quarter in 2019.

In addition, the company has become significantly more efficient during this pandemic. It is on track to remove $300 million of fixed costs and some variable costs as well. Management believes this should allow the company to reach adjusted EBITDA profitability in the fourth quarter of next year, even on 30% fewer rides than it had previously assumed.

The passage of Prop. 22 is a very big deal. The meaningful increase in costs that the AB5 law would have brought about would likely have required Lyft to significantly increase ride prices. That may have meaningfully decreased ride demand, even post-pandemic.

That's why, when investors became fearful that Prop. 22 might fail, Lyft's share price traded for as low as $22 per share in late October right before the vote.

The passage of Prop. 22 means Lyft can move forward without a serious risk hanging over it. And as the company gradually recovers from the effects of the COVID-19 pandemic, it's likely to be more profitable -- and sooner -- than many investors previously expected due to the cost initiatives it has taken this year. Investors should take notice.