Please ensure Javascript is enabled for purposes of website accessibility
Free Article Join Over 1 Million Premium Members And Get More In-Depth Stock Guidance and Research
By Will Healy - Dec 9, 2020 at 11:07AM

Roku ( ROKU -8.72% ) continues to achieve one earnings success after another. The most recent quarter brought a massive revenue surge and a surprise profit. As its user base and advertising ecosystem continue to grow, Roku has placed itself at the center of the streaming universe.

However, with these successes comes a higher valuation and a rising price for this communications stock. Despite the high price of entry, Roku remains a buy for three critical reasons.

One has to only look at the company's financials and user count to see the success of its strategy. In the most recent quarter, active accounts rose by 43% year over year to 46.0 million. Streaming hours increased 54%, while average revenue per user (ARPU) surged by 20% over the same period.

This helped push revenue up 73% in the quarter to $451.7 million, and the company earned a quarterly profit of $0.09 per share. The positive earnings are quite a feat considering Roku has typically chosen to reinvest instead of claim profits. In the third quarter, purchases of property and equipment doubled year over year to $76.0 million. 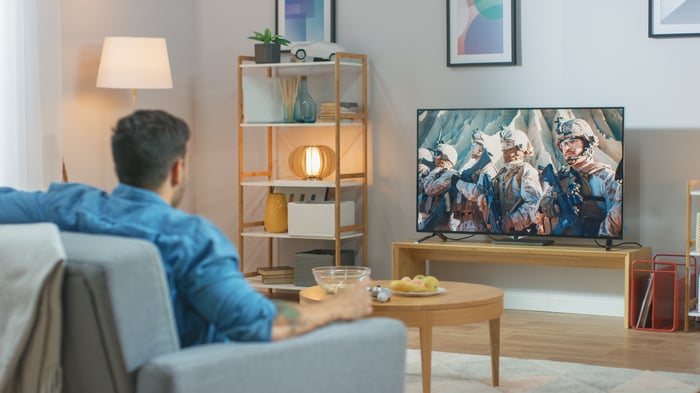 The company gave little in the way of specific guidance. However, management predicted revenue growth will come in at a rate similar to the last two holiday seasons.

Although that bodes well for the company's immediate future, it may also mean that the company will not experience another profitable quarter anytime soon. Moreover, Roku trades at more than 24 times trailing 12-month revenue, so buying this stock will not come cheap.

Still, Roku has become a lucrative coronavirus play. Although it lost more than half of its value at one point this year, the stock has more than doubled in 2020 to date. As consumers found themselves stuck in lockdowns and self-imposed isolation, Roku facilitated low-cost entertainment for millions. 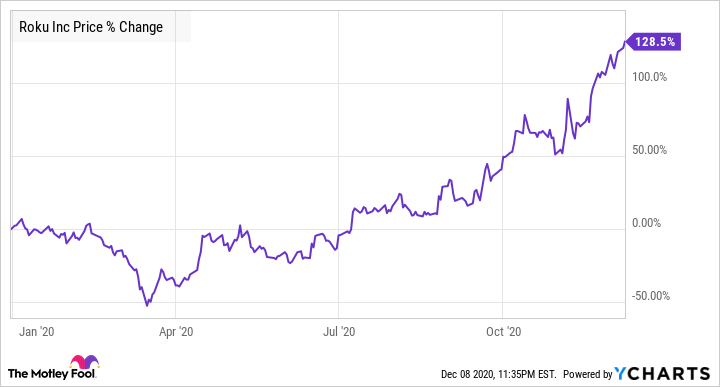 More importantly, it derives its revenue and growth from a well-conceived business model. Admittedly, its equipment business leaves the company with a weak moat and little to drive the aggressive valuation. However, its ad platform not only serves as an additional growth driver, but it also gives the streaming industry an ecosystem where no single service holds too much of an advantage.

Yes, Roku somewhat compromised its neutrality by starting its own streaming channel. However, the prevalence of older content and commercial interruptions on The Roku Channel means it does not directly compete with ad-free premium offerings.

With help from The Roku Channel, the company can attract programming and ad dollars that might have appeared on network TV in past years. This trend accelerated as overall ad spending for traditional TV has flattened, according to a MoffettNathanson analyst.

For all of its gains, the bulk of Roku's existing customer base is in the U.S. However, for most tech giants, the U.S. is merely the tip of the iceberg.

To this end, the company has moved to pursue a more international focus. In 2019, Roku expanded into Canada, Mexico, and other markets such as the U.K. It also began selling Roku TVs in Brazil in 2020.

Roku still does not break out revenue by region. However, in the company's fiscal 2019 10-K, it revealed that less than 10% of its revenue came from outside the U.S. This shows that its international expansion has barely begun.

If the footprint of streaming giant Netflix is any indication, Roku has a long way to go. The former now generates less than half of its revenue from the U.S. and Canada.

Also, the fact that Netflix has now expanded to more than 190 countries shows tremendous potential for future growth abroad. This should reassure investors that the revenue growth and rapid expansion of Roku's ad platform can continue for years to come.

As mentioned before, Roku appears to control a rapidly expanding business that is still in the early innings its growth story.

However, due to the stock's high valuation, investors need to closely watch key metrics like active accounts and streaming hours, because at its core, Roku is an ad company. If these figures do not continue to expand rapidly, the platform could lose some of its appeal to advertisers, leading the market to rethink the stock's generous revenue and earnings multiples.

Fortunately, the potential in Roku's international expansion should keep the growth engine chugging along, and I see little that could compromise its long-term trajectory.