There has been a lot of talk about a tech bubble in recent months. Many stocks across the sector have seen valuations rise an insane amount based on speculation and revenue spikes, spurred by changes related to the pandemic or other factors. Some tech companies have just ridden the wave without any real revenue or earnings. The valuations have gotten too high, some say, and could come crashing down in a slow-growing economy, or in a return to a semblance of normalcy when the utility of certain companies is no longer as sought after.

That's not to say the bubble will definitely burst -- and even if there is a crash in part of the sector, it won't affect all tech stocks as a monolith. One fintech in particular that is built to survive whatever 2021 has in store is PayPal Holdings (NASDAQ:PYPL). PayPal is such a great long-term stock that I think you should consider buying it now, before the price gets too high. 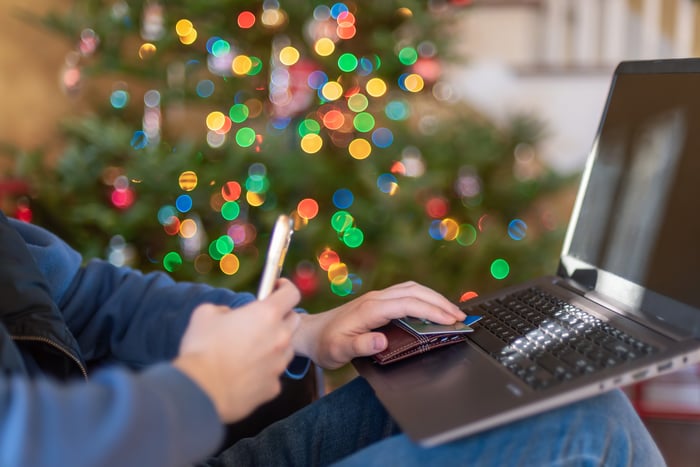 PayPal had a record third quarter

The services that PayPal offers -- sending and receiving cash and payments online -- have certainly been more critical than ever due to the pandemic. With people staying home and social distancing, the usage of PayPal has skyrocketed. In fact, PayPal is coming off one of its best quarters ever, with a 25% increase in revenue year over year to $5.5 billion, and a 121% increase in earnings.

These numbers have boosted PayPal's stock price up over 100% year to date. There are a few good reasons why this is not a short-term market reaction, and why it would be a good idea to buy PayPal now before the price rises even higher.

There are certainly some tech stocks that are due to burst after an unsustainable run-up over the past year. PayPal is not one of them. As the largest digital payments company in the world, with about a 55% market share, PayPal is at the vanguard of the trend away from cash toward digital payments.

There have been numerous reports charting the gradual move away from cash, including one conducted in January by GlobalData (before the pandemic), which said several European and Asian nations will be cashless this decade, with the U.S. also moving in that direction. But the pandemic has accelerated the trend. A report from digital payments company Square said the number of its merchants that were completely cashless rose from 5% before the pandemic to 13% in August.

Further, a June report from Mastercard found that roughly 70% of consumers say the shift to digital payments will be permanent. About half of those surveyed said they plan to use cash less often after the pandemic subsides.

PayPal has expanded on its cashless, touchless offerings with Venmo, its mobile app for sending and receiving money; Venmo and Square's Cash App are the two largest players in this space. It is also introducing a QR-code based payment option for touchless payments in physical stores. This is being rolled out in the fourth quarter at CVS stores, with other retailers to follow. In addition, PayPal plans to offer a Venmo credit card for in-store purchases.

PayPal CEO Dan Schulman said earlier this year that he aspires to have 1 billion users on the PayPal platform, which would nearly triple the current number. That type of growth is certainly possible with its market-leading position, cashless tailwinds, and incredibly strong financial position. PayPal had $4 billion in free cash flow at the end of the third quarter, up 44% from a year ago. It has generated huge revenues and lots of cash flow to fund future innovations.

While there may be a temporary dip like we saw in September, PayPal's stock price is likely going to continue its steady climb for years to come. You may not get this great stock at a lower price than you will right now.