Please ensure Javascript is enabled for purposes of website accessibility
Free Article Join Over 1 Million Premium Members And Get More In-Depth Stock Guidance and Research
By Lou Whiteman - Dec 10, 2020 at 9:07AM

It would create risks, and opportunities, for industrial companies in a range of sectors

The European Commission on Thursday revealed its Sustainable and Smart Mobile Strategy, an ambitious plan to cut transport-related emissions by 90% by 2050. The plan, if enacted, is sure to disrupt transportation companies in the years to come. It could also create opportunities.

The commission, the executive arm of the European Union, wants to see at least 30 million zero-emission cars in operation on European roads by 2030 and a zero-emission large aircraft ready for market by 2035. If all goes to script, the goal is for nearly all cars, vans, buses, and new heavy-duty vehicles to be zero emission by 2050, with freight-rail traffic doubling to take some of the burden off roads. 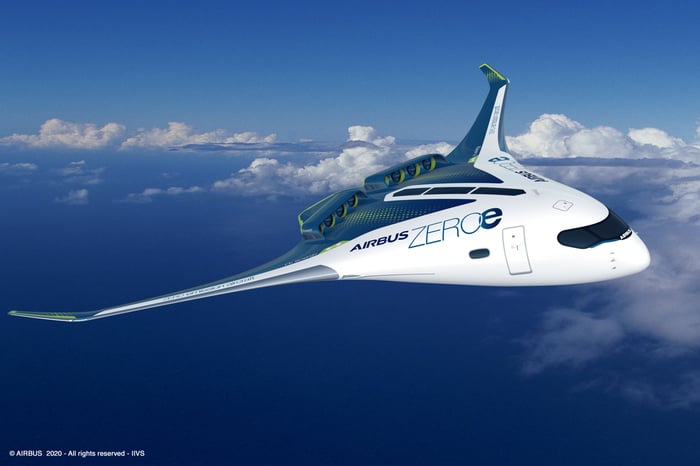 "As the backbone that connects European citizens and business, transport matters to us all," EU commissioner for transport Adina Valean said in a statement. "Through the implementation of this strategy, we will create a more efficient and resilient transport system, which is on a firm pathway to reduce emissions in line with our European Green Deal goals."

The goals would put pressure on a lot of manufacturers, but companies were moving in the same direction as the EU even before the plan was released. Airbus ( EADSY -0.75% ) in September unveiled a zero-emission hydrogen airplane concept it hopes to have in service by the middle of the next decade.

It could spur further investment by Boeing ( BA -1.51% ), which is behind on hydrogen but has been exploring other ways to reduce emissions.

Automakers are also well on their way to meeting the European targets. Industry titans including General Motors ( GM -3.04% ), Ford Motor ( F -2.26% ), and Volkswagen ( VWAGY -3.34% ) are rapidly expanding their electric vehicle offerings. The guidelines should also open up more of a market for younger companies, including Tesla ( TSLA -0.06% ), that have focused on zero-emission electric vehicles from the beginning.