Please ensure Javascript is enabled for purposes of website accessibility
Free Article Join Over 1 Million Premium Members And Get More In-Depth Stock Guidance and Research
By Reuben Gregg Brewer - Dec 13, 2020 at 8:01AM

Which U.S. oil giant would be a better fit for your portfolio? The answer is increasingly obvious, especially for conservative investors.

The problems facing the oil industry are intense, and they're pushing smaller and weaker names into bankruptcy. That will likely be a net benefit for big names like ExxonMobil ( XOM 0.29% ) and Chevron ( CVX 0.45% ), as it helps to clear the current supply/demand imbalance. But surviving this rough patch may still require big changes. One of these two U.S. energy companies looks better prepared for ongoing adversity than the other.

Right now, the biggest issue facing energy stocks is low oil and natural gas prices. The proximal cause of the pain is the economic shutdowns being used to slow the spread of the coronavirus, which has led to a massive decline in demand. However, there's still a bigger issue taking shape that has been growing in importance for years: increasing U.S. onshore production. While OPEC has been curtailing production to offset U.S. output, the world entered 2020 with more oil being produced than it was using. That has amplified the pain. 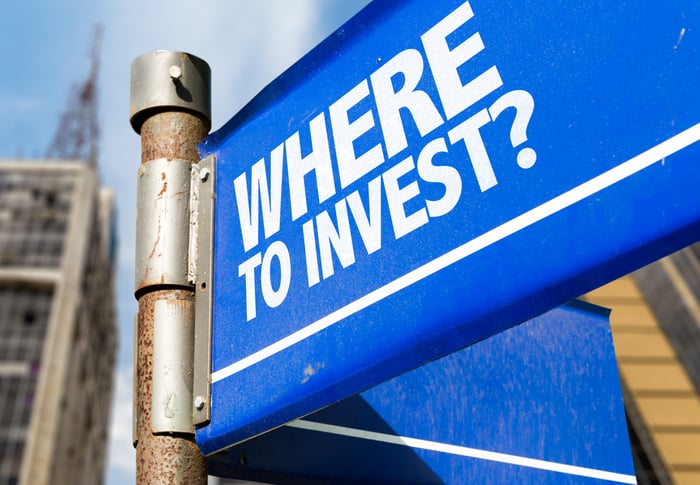 Layered on top of that is the increasing importance of clean energy. Solar and wind power, for example, are expanding rapidly while the world shifts away from older, carbon-based energy production. Just as important for oil and natural gas drillers is the move toward electric vehicles, which is expected to reduce demand for gasoline in the future. Indeed, even effective coronavirus vaccines won't alleviate all the headwinds energy companies are facing today.

With this backdrop, investors should be focusing on the largest, most diversified, and financially strongest industry players. That list would include both Exxon and Chevron. However, the two companies have been going in different directions in one very important way.

The rise and the fall

For many years, Exxon was the energy company with the cleanest balance sheet, and it still has one of the strongest financial positions in the integrated-energy-giant space. However, in the face of low energy prices, it has been trying to achieve competing goals. Heading into 2020 it had set out a massive spending program to support its production. It had little choice, since production had been in decline and it needed to turn that trend around. But it also has a long and impressive history of dividend increases that it wants to keep going. At 37 years and counting, Exxon is in the rarified Dividend Aristocrat space.

With energy prices low, and the company bleeding red ink for three consecutive quarters, both goals are looking tenuous. So far the company has used debt to support its cash outlays, but that's increased the company's leverage. Exxon's debt to equity ratio rose from roughly 0.25 times at the start of 2020 to nearly 0.4 times at the end of the third quarter. It has also been pulling back on its capital spending plans and selling assets, both of which will take a toll on its production growth plans. There is a very real risk that the dividend gets cut -- it costs Exxon a massive $15 billion or so a year. Peers Royal Dutch Shell and BP have already cut their shareholder payouts.

Exxon continues to say the dividend is important, but a recent update is troubling. Management announced cuts to its capital spending plans, and write-offs that could total as much as $20 billion... and it changed its dividend language. Historically the company said a reliable and growing dividend was important; now the wording is simply reliable. In a difficult energy market, that's a troubling change for investors and hints that Exxon is struggling to do everything it wants. 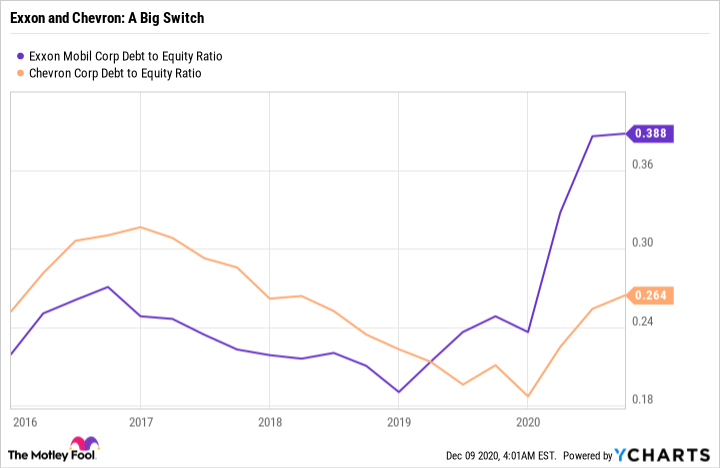 Chevron, meanwhile, is in a comparatively better position. Previous capital investments meant that it didn't enter this industry downturn with the same spending needs. It has taken on additional debt, too, but not nearly as much, and its balance sheet is stronger: Chevron's debt to equity ratio went from around 0.2 times at the start of 2020 to around 0.25 times at the end of the third quarter.

It continues to say it has a firm commitment to its dividend, which has been increased annually for 33 years. However, more important, it is in better shape to live up to that pledge than Exxon. And that gives Chevron an edge over Exxon for dividend investors right now, particularly those with a conservative bent.

To be fair, Exxon and Chevron are at the low end of the energy industry when it comes to leverage, and both are likely to muddle through this downturn in one piece. However, Exxon is in a weaker financial position at the same time that it is facing material capital spending costs. There is a very real risk that it will need to trim the dividend if oil and gas prices don't turn around relatively soon. Chevron is simply in a better place financially, and that will make it easier for the energy giant to keep rewarding investors for sticking around.