Please ensure Javascript is enabled for purposes of website accessibility
Free Article Join Over 1 Million Premium Members And Get More In-Depth Stock Guidance and Research
By Harsh Chauhan - Dec 14, 2020 at 10:17AM

Higher demand and the switch to a more profitable business model will be tailwinds for this company next year.

Nutanix ( NTNX -3.55% ) seems all set to close out 2020 on a high after a disastrous start that saw the company slash its full-year guidance in March on account of the novel coronavirus pandemic and a shift in its business model.

Shares of the cloud-based hyper-convergence specialist have recovered a lot of ground, however, and they seem capable of delivering more upside given the pace at which the company's subscription business is growing. In fact, it wouldn't be surprising to see Nutanix turn out to be a top cloud play in 2021. Let's take a closer look at why that might be the case. 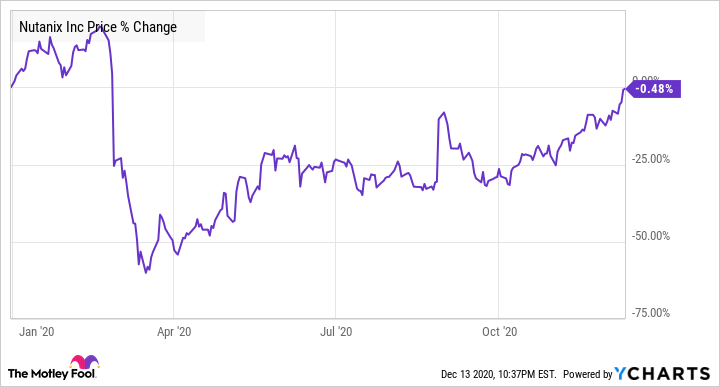 Nutanix's transition is paying off

Nutanix started transitioning to a subscription-based business model (as opposed to a product-driven model) nearly three years ago, and that switch has turned out to be a boon for the company's margin profile and bottom line.

In the first quarter of fiscal 2021, Nutanix's non-GAAP gross margin increased 180 basis points year over year to 81.9% despite a flat top-line performance. That's a huge improvement over the non-GAAP gross margin of 61.9% in the same quarter three years ago. The company has nearly eliminated its reliance on legacy sources of revenue such as non-portable software and hardware.

Nutanix's combined revenue from these two sources was just under $21 million last quarter, accounting for less than 7% of its total revenue of $312.7 million. They supplied just over $87 million of the company's total revenue in the prior-year period when they accounted for more than 27% of the total revenue.

The more important thing to note here is the impressive pace of growth in Nutanix's subscription business. Its subscription revenue had jumped close to 28% year over year last quarter and now accounts for almost 89% of the total. 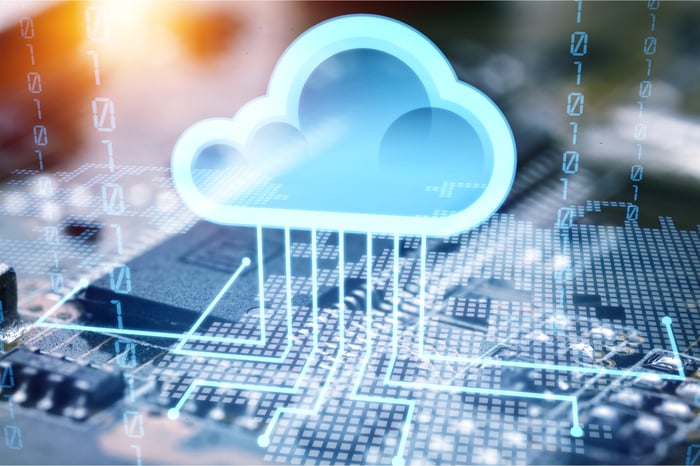 The good news for Nutanix investors is that it is likely to sustain its impressive rate of subscription growth, as the value of its contracts is growing at a nice clip. The annual contract value (ACV) represents the total annualized value of a contract after removing expenses related to hardware and professional services.

Last quarter, Nutanix's run-rate annual contract value (ACV), which represents the total of ACV for all Nutanix's contracts that were active at the end of the quarter, jumped an impressive 29% over the year-ago period to $1.3 billion thanks to the adoption of its new products. The company was originally expecting 20% growth in this metric. Nutanix also saw a year-over-year jump of 87% in the ACV of new products during the quarter.

The company now anticipates 25% year-over-year growth in the run-rate ACV this quarter, indicating that Nutanix is all set to carry its momentum into the New Year. Such impressive growth is not surprising, as the company has partnered with leading cloud service provider Microsoft, which will allow the two companies to bring hybrid cloud solutions on the latter's Azure platform. Similarly, Nutanix is also offering its hyper-converged infrastructure (HCI) on Amazon Web Services.

Nutanix's presence on two major cloud service providers, which together account for 51% of the global cloud market according to third-party estimates, bodes well for the company's long-term prospects, as the HCI market is expected to clock a compound annual growth rate of 30.7% through 2026, according to Allied Market Research. So Nutanix still has a lot of room to grow its business thanks to the market it operates in.

Additionally, the company has finally finished its search for a new CEO, appointing former VMware executive Rajiv Ramaswami to the post as current CEO and co-founder Dheeraj Pandey retires after 11 years in the role. Ramaswami was the COO at VMware for four years before joining Nutanix, and he has also held positions at Cisco and Broadcom. The relevant experience that Ramaswami brings should be a tailwind for Nutanix and may help the company switch into a higher gear, especially considering that he comes over from a close competitor.

Analyst estimates compiled by Yahoo! Finance indicate that Nutanix could soon return to top-line growth, and that wouldn't be surprising considering the tailwinds discussed above. Moreover, the high-margin nature of the company's subscription-based business should allow it to deliver improved earnings performance in the long run.

All of this makes Nutanix a potential growth stock for the long run that investors need to keep their eyes on, as it seems to have enough fuel to sustain the terrific rally witnessed over the past few months.