In 2018, Starbucks (NASDAQ:SBUX) set ambitious plans for growth in China, its second-largest market. It targeted nearly doubling its store count in the country by fiscal 2022 (relative to fiscal 2017), while more than tripling its revenue and more than doubling operating income. There have been bumps along the way, but Starbucks is on track to achieve most of these goals, despite the ongoing COVID-19 pandemic.

Meanwhile, Starbucks intends to close nearly as many stores as it opens in North America -- its largest market -- during fiscal 2021. That might make it seem like the company has run out of room to grow in its home market. But at Starbucks' investor day last week, management reiterated its belief that the coffee giant has ample long-term growth potential in the U.S.

Starbucks pivots in the U.S.

Earlier this year, Starbucks announced plans to close a significant number of stores in North America as it attempts to redesign its business to match changing customer habits. On the company's fourth-quarter earnings call in late October, management said that Starbucks would open 850 stores in the Americas during fiscal 2021 while closing 800 others. That would put its net store growth for the region at just 50 units: an increase of less than 0.3%. 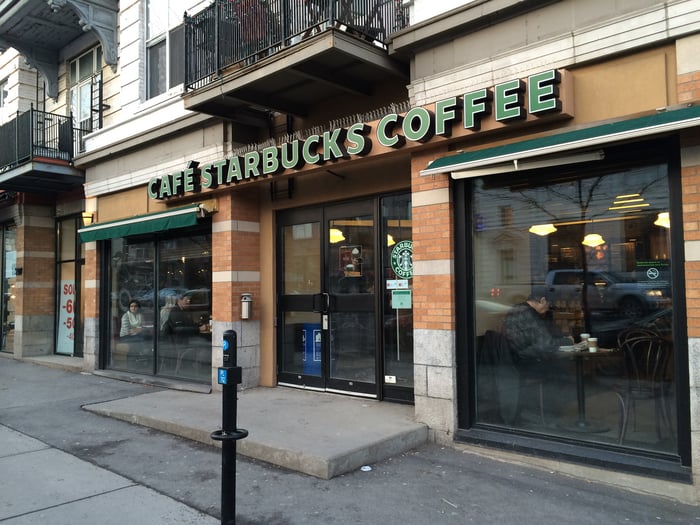 These moves represent a shift away from Starbucks' historical business model, which was based on making its cafes a "third place" away from home and work where people would sit and socialize. The reality is that even before the pandemic, about 80% of sales were to-go. That makes it unnecessary for Starbucks to maintain a high concentration of large stores with ample seating in urban markets, as it does today.

As a result, Starbucks is closing large, high-rent stores at an accelerated pace in densely penetrated urban markets. But in many cases, it is opening small-format Starbucks Pickup stores without seating nearby. It is also opening more suburban drive-thru locations. By the end of fiscal 2023, Starbucks expects drive-thru, Starbucks Pickup, and other new store formats to make up 45% of the U.S. store base, up from around 35% today.

Closing traditional urban stores at an accelerated rate will help Starbucks shift its store base toward more productive store formats quickly. However, looking beyond fiscal 2021, Starbucks plans to continue opening lots of drive-thru and small-format stores, while the number of annual store closures should revert to historical levels.

In fact, Starbucks plans to grow its U.S. store base an average of 3% annually for the foreseeable future. With over 15,000 stores in the U.S. today, this implies around 500 domestic store additions annually for the next few years. Management pointed out that Starbucks is underpenetrated across a wide swath of the Midwest and the South, leaving plenty of room to expand the store base.

Starbucks also expects to post robust annual comp sales growth between 4% and 5% in the U.S. once it fully recovers from the COVID-19 pandemic. New digital tools to enhance customer loyalty and engagement will help Starbucks meet this lofty comp sales growth target.

Growth at home and abroad

Between its projected store growth and comp sales increases, Starbucks expects to grow revenue at least 7% annually in the U.S. for many years to come. That's not too shabby. It suggests that the company is still a long way from saturating its largest market.

Of course, Starbucks is poised to grow much faster in China. It's on track to increase its store count there to 6,000 by late 2022, and it will probably double that figure again by 2030 at a minimum. However, that growth is coming off of a lower base. Starbucks still generates about five times as much revenue in the U.S. as it does in China.

China will grow in importance for Starbucks over the next decade. Nevertheless, the bulk of the company's revenue growth will come right at home. Starbucks' ability to hit its growth targets in the U.S. will be the biggest determinant of its long-term stock market performance.