Please ensure Javascript is enabled for purposes of website accessibility
Free Article Join Over 1 Million Premium Members And Get More In-Depth Stock Guidance and Research
By Adria Cimino - Dec 15, 2020 at 6:15AM

An FDA meeting this week will be crucial for this coronavirus vaccine maker.

A year ago, you might not have heard of Moderna ( MRNA 11.79% ). The clinical-stage biotech company's messenger RNA (mRNA) drug candidates were in preclinical or early human trials for indications including cancer, autoimmune disorders, and viruses such as Zika. The stock was trading at about $19 per share, and market value stood at $6 billion.

But Moderna spent most of 2020 making headlines. That's because this biotech company got in on the coronavirus vaccine race early. So early, in fact, that it became the first to launch a vaccine candidate in human trials. That was back in March. It's clear that everyone is talking about Moderna now. So let's take a closer look at what's next for this biotech company. 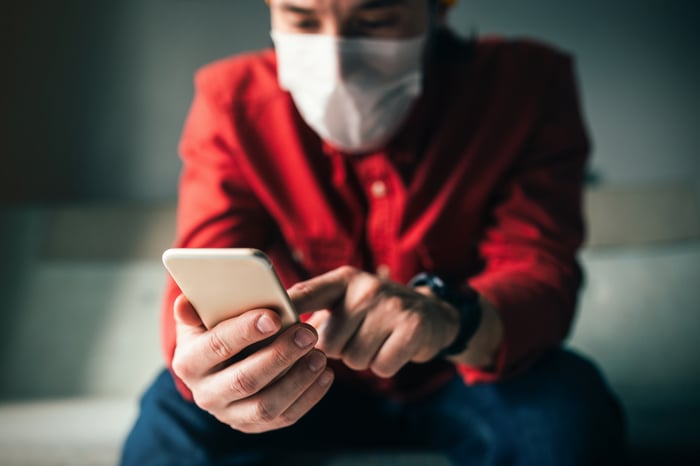 Moderna, like rival Pfizer ( PFE -2.96% ) and its partner BioNTech ( BNTX 4.17% ), has developed an mRNA vaccine candidate. These vaccines work by delivering instructions to cells to produce a protein from the coronavirus. The immune system then makes antibodies against that protein, as if it were actually fighting the virus. This is different from traditional vaccines, which introduce a weakened virus into the body to trigger an immune response.

The U.S. Food and Drug Administration (FDA) offered Emergency Use Authorization (EUA) to the Pfizer/BioNTech team for their vaccine on Friday. That has allowed the the pair to begin selling the product immediately. At the same time, the pair of companies will continue gathering trial data that will support a request for full approval.

Now, it's Moderna's turn. The FDA will meet with an advisory committee of industry experts on Dec. 17 to discuss Moderna's candidate. The committee will vote at the end of the meeting on whether the FDA should authorize the investigational vaccine. The FDA isn't obliged to follow the committee's advice. But the regulatory agency does seriously consider the panel's opinion. In Pfizer's case, the panel voted 17 to four in favor of an EUA. There was one abstention.

Will Moderna follow in Pfizer's footsteps? There are no guarantees, of course. But, from the data available to us, it's reasonable to be optimistic. Moderna's vaccine candidate showed 94.1% efficacy in the phase 3 trial. And the company said it was safe and generally well tolerated.

A champion at preventing severe disease

Most importantly, the Moderna candidate was 100% efficacious in preventing severe cases of COVID-19. Pfizer reported one case of severe coronavirus in its vaccinated group versus nine in its placebo group. Moderna reported zero cases of severe disease in those receiving its vaccine and 30 in those receiving a placebo. This is significant because the severe cases are those that put a strain on hospital systems and lead to an increased number of deaths.

Investors will be talking about Moderna this week even more than usual. That's because the FDA's decision is crucial for the company. An authorization would mean immediate product revenue. Otherwise, considering Moderna's closest-to-market programs are in phase 2 studies, real product revenue is years away.

Moderna's vaccine pricing may vary according to the size of the deal and other factors. But let's use the $15 a dose price paid by the U.S. government to give us an idea of how much revenue we may expect. Moderna's orders so far -- from various countries -- equal a total of about 390 million doses. At that price, Moderna would generate more than $5.8 billion in revenue.

We know that Pfizer will share the market. And others may be close behind in the vaccine race. Companies including AstraZeneca ( AZN -1.86% ), Novavax ( NVAX -11.02% ), and Johnson & Johnson ( JNJ 0.34% ) have candidates in phase 3 studies. Considering the global need for a vaccine, I wouldn't expect a drop in sales for Moderna any time soon -- even if the FDA grants several companies EUAs. That said, investors should keep an eye on the competitive landscape after the pandemic is over and farther into the future.

Meanwhile, Moderna's shares have soared more than 700% this year, and its market cap has reached $63 billion. 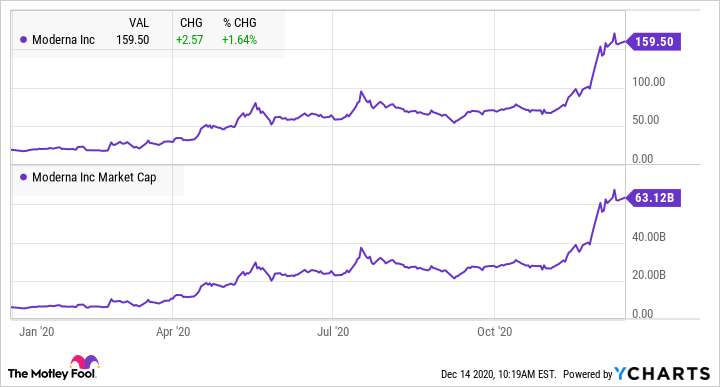 If the FDA grants the biotech company an EUA, the shares may have farther to go -- at that point, and again once revenue starts rolling in. In that case, I expect Moderna to be the subject of conversation not only in the final weeks of 2020, but for all of 2021.