The stock market has been a bit volatile lately, with major market benchmarks getting choppy after posting solid gains for 2020. Still, Tuesday morning brought a nice bounce for stocks after Monday's late-day declines. Investors still appear to be upbeat about the prospects for the U.S. economy in 2021, especially as coronavirus vaccines make their way toward people across the nation. As of 10:45 a.m. EST, the Dow Jones Industrial Average (DJINDICES:^DJI) was up 39 points to 29,900. The S&P 500 (SNPINDEX:^GSPC) climbed 13 points to 3,661, and the Nasdaq Composite (NASDAQINDEX:^IXIC) picked up 75 points to 12,515.

Hydrogen fuel-cell and battery technology has been a big focus area among investors, and today, Plug Power (NASDAQ:PLUG) announced big news that sent its shares climbing higher. But even bigger gains were in store for shareholders owning Prevail Therapeutics (NASDAQ:PRVL), which became the latest target in a series of acquisitions from top players in the pharmaceutical industry. 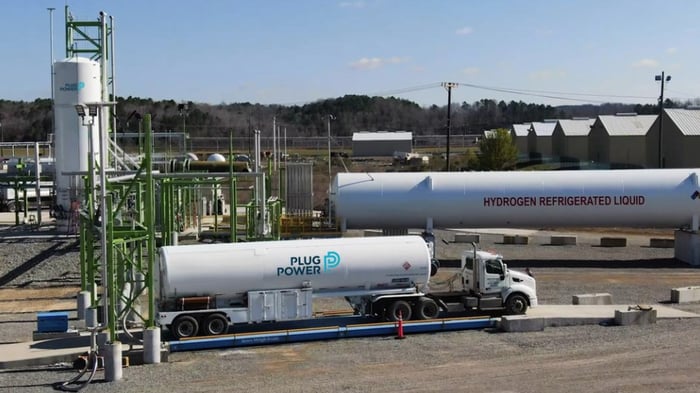 Plugging in at Walmart

Shares of Plug Power were up almost 12% Tuesday morning. The hydrogen fuel cell specialist announced that it would expand its partnership with retail giant Walmart (NYSE:WMT).

Plug Power has had a long history of working with Walmart. The retailer was Plug's first customer for its GenKey hydrogen and fuel cell solutions platform, coming on board a decade ago to help Walmart with its fleet of vehicles for handling and moving materials. More than 9,500 GenDrive vehicles powered by fuel cells are in use at 37 Walmart distribution centers across North America.

However, Plug now wants to help Walmart with its e-commerce network. The companies started working together on this new initiative back in August, but they expect additional expansion in the coming year.

For its part, Walmart has been pleased about the partnership, with a supply chain executive noting how important it has been to be able to handle increased demand for basic supplies and food during the COVID-19 pandemic. For Plug Power, the news is welcome confirmation of arguably its most successful collaboration, and investors have high hopes for the future. It also reignited excitement about the industry generally, as peer FuelCell Energy was up 9% as well.

Shares of Prevail Therapeutics soared, rising 84% Tuesday morning. The small gene therapy specialist was the latest beneficiary of a growing trend toward mergers and acquisitions in the pharmaceutical industry, as Eli Lilly (NYSE:LLY) swooped in to purchase the company.

Lilly agreed to pay what could potentially turn into more than $1 billion for Prevail. Prevail shareholders will receive $22.50 per share in cash up front, adding up to roughly $880 million. However, Lilly will also provide a contingent value right that could pay an additional $4 per share if a product in Prevail's pipeline obtains approval from the U.S. Food and Drug Administration or a similar regulator in any of half a dozen countries by the end of 2024. The right would make lesser payments for an approval between 2025 and 2028.

The news comes just after Lilly boosted its quarterly dividend by 15% to $0.85 per share. The drugmaker apparently felt comfortable hiking its payout even with the big cash outlay for Prevail.

Looking ahead, Lilly hopes that Prevail's candidate gene therapies for Alzheimer's, Parkinson's, amyotrophic lateral sclerosis, and other neurodegenerative disorders will help complement Lilly's own status in the development of neuroscience treatments. With Lilly's shares climbing 3% as well, investors seem to agree that the buy was a smart one.