The oil industry has had had a strange decade as the seeming rise and fall of oil stocks have happened over and over again. The decade started with depressed demand because of a global recession, but ended with surging oil demand in the U.S. and abroad as SUV sales increased and the global economy made a slow but steady recovery.

2020 changed everything and brought out the industry's warts, as a global pandemic hit demand across the world. Prices even went negative for a short time. This dynamic has hurt oil stocks that have for the most part been in decline over the last two years. And we may already be seeing the end of oil's dominance in energy on the horizon. 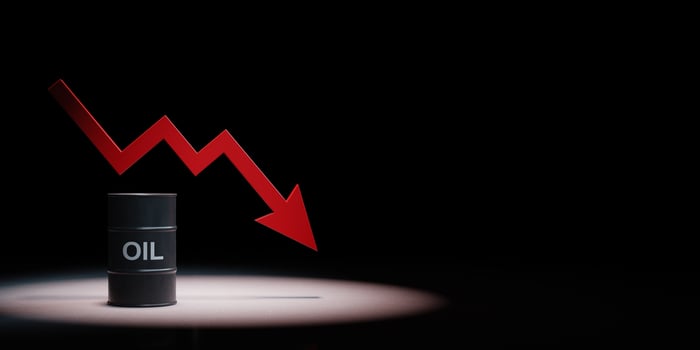 The first thing to look at for oil stocks is what direction operations are headed. Is revenue rising? Are margins improving or at least staying steady? Or is the business generally in decline?

To get a broad look at where the oil industry is headed, take a look at the chart below, which shows revenue and operating margins for ExxonMobil (NYSE:XOM), Chevron (NYSE:CVX), and Royal Dutch Shell (LSE:RDSA). These three companies are big and diverse, giving us a big-picture view of the oil industry today. 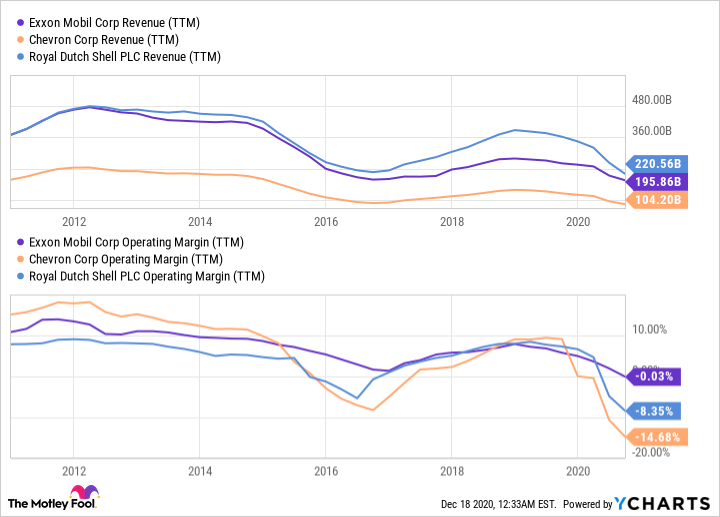 What you can see is that revenue and margins are in a long-term decline. Those aren't good trends for the industry and tell us a little bit about why oil stocks are in decline. But understanding why they are performing poorly also says a lot.

Why oil is in decline

On the demand side, oil isn't in a terrible position, but there are some negative signs. You can see below that global oil consumption continues to grow steadily, but in the U.S., consumption has been flat for two decades and was in a steady decline until the last five years, when an economic boom drove increased SUV sales. 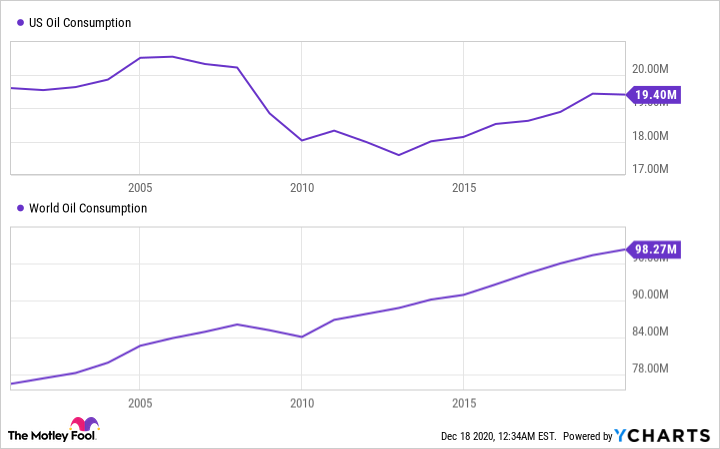 There are a number of factors affecting oil margins, but there are a few that stand out:

In reality, there's a limit on growth and margins for oil companies. And that limits the opportunity for investors.

The energy industry has told us what the future looks like

Everything I've laid out indicates that oil companies are in for a structural decline in operations over the next few decades. And these aren't crazy to point out because oil companies themselves agree with the bleak assessment.

BP said in its 2020 energy outlook that demand for oil will fall over the next 30 years as EVs take market share. Management has also said it will produce less oil a decade from now than it does today as it invests more in cleaner energy investments.

The Wall Street Journal recently reported that ExxonMobil has also cut its expectations for oil prices by between 11% and 17% versus previous projections. The company has also released plans to reduce greenhouse gas emissions, a huge shift for the oil giant.

If big oil thinks the best days are behind us, then what should we expect but a decline in the industry.

Stay away from oil stocks

All indications are that oil is in for a decline in demand over the next decade or more, and that won't help the operations of any oil stocks. Some companies will strike oil and beat the market, and others may make a successful shift to renewable energy. But there are better energy investments than buying into a dying industry and hoping it can make a shift to a new industry altogether. I would stay far away from oil stocks today.