A lot was riding on Apple's (NASDAQ:AAPL) 2020 iPhone lineup, as sales of the company's smartphones had been stagnating in recent years. But the Cupertino-based company can now breathe easy as the initial sales response to its iPhone 12 models has turned out to be terrific.

The arrival of 5G wireless technology, the impressive pricing of the iPhone 12, and a huge installed base of users in an upgrade window have set the sales register ringing for Apple. Not surprisingly, the iPhone 12 became the world's best-selling 5G phone in October, as per Counterpoint Research. It was followed by the iPhone 12 Pro, with both devices accounting for nearly a quarter of global 5G smartphone sales during the month.

But what's really impressive is that Apple's latest devices managed to reach the top of the charts despite being on sale for just a couple of weeks in October. The solid demand for the iPhone 12 is expected to continue in 2021 as well, as more users upgrade to 5G. That's probably the reason why Apple is reportedly going to boost iPhone 12 production in 2021 to the tune of 20% to 30%, as per supply chain sources cited by media outlet Nikkei Asia. For the full year, Apple could end up making 230 million units, which would be its best performance in six years.

This is great news for those companies that rely on Apple for a good chunk of their revenues. In this article, we will take a closer look at two Apple supplier stocks -- Jabil (NYSE:JBL) and Qorvo (NASDAQ:QRVO) -- that not only stand to win big from Apple's success but are also trading at relatively attractive valuations despite rallying impressively in the past few months. 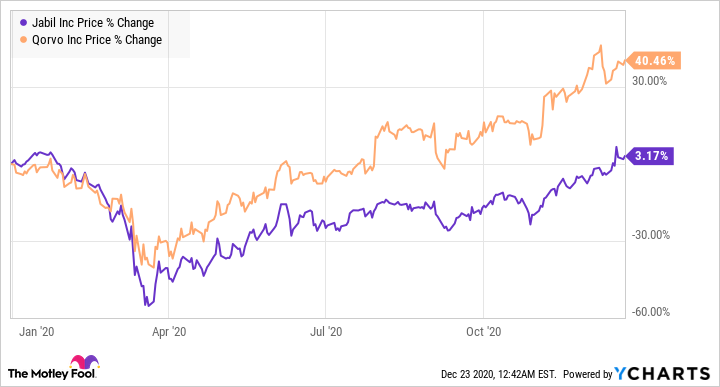 1. Jabil has a big year ahead

Jabil makes casings for iPhones through its diversified manufacturing services (DMS) segment and reportedly gets 22% of its revenue from Apple. The strong demand for the iPhone 12 has turned out to be a tailwind for the company as its latest quarterly results indicate.

Jabil recorded 13% year-over-year revenue growth in its DMS segment to $4.2 billion in the first quarter of fiscal 2021 that ended on Nov. 30. Overall revenue of $7.8 billion exceeded the midpoint of the company's expectations by $800 million thanks to the strength in DMS. For the full year, Jabil now anticipates $27.5 billion in revenue, better than its original forecast of $26.5 billion and fiscal 2020 revenue of $27.3 billion.

The company says that $800 million to $900 million of the additional revenue will come in the first half of the year, indicating that it is on track to take advantage of a potential increase in iPhone production.

The flat top-line performance may be a point of concern, but investors need to note that Jabil is changing the model of its electronic manufacturing services (EMS) business in a bid to boost margins. Instead of purchasing and reselling EMS solutions, Jabil is now moving toward a consignment model wherein it will earn a commission when a sale is made. As a result, its EMS revenue will be under pressure until the shift is complete, but this will also lead to improved bottom-line performance.

This reflects in the company's fiscal 2021 guidance that calls for a core operating margin of 4.1% as compared to last fiscal year's reading of 3.1%. Core earnings per share are expected to come in at $4.60 this fiscal year, much better than fiscal 2020's earnings of $2.90 per share. However, recent reports that Apple could increase iPhone production in 2021 could help Jabil put better numbers on the board.

What's more, Jabil stock is worth buying even after rallying impressively over the past few months. The stock's price-to-earnings (P/E) ratio of 30 is lower than the five-year average multiple of 38, while its forward multiple sits at just 10.6 thanks to the big improvement that's expected in the bottom line this fiscal year. As a result, Jabil looks like an ideal stock for valued-oriented investors looking for growth given its attractive valuation.

2. Qorvo is turning up the heat

Wireless chip supplier Qorvo has been the bigger gainer of the two supplier stocks discussed here, and it also sports a rich valuation with a trailing P/E ratio of nearly 43. But a forward earnings multiple of just 18 suggests that strong earnings growth is in the cards.

That's not surprising, as Qorvo's business has picked up the pace since the launch of the new iPhone generation. Qorvo's revenue for fiscal 2020 that ended in March this year had increased just 5% over the prior-year period. But the company has stepped on the gas in the first two quarters of the current fiscal year.

In the first six months of fiscal 2021, Qorvo's revenue increased by nearly 17% over the same period a year ago. The fiscal second quarter turned out to be an impressive one for Qorvo, with revenue jumping 31% year over year to $1.06 billion. Qorvo's fiscal third-quarter guidance indicates that its impressive momentum is set to continue, with revenue expected to increase nearly 22% over the year-ago period.

However, Qorvo could deliver stronger numbers, since the company reportedly gets around a third of its revenue by selling wireless connectivity chips to Apple. If Apple indeed increases the output of its iPhones and has a record year in 2021, Qorvo may be able to sustain the growth rates that it has been posting of late.

Analyst estimates compiled by Yahoo! Finance point toward a 35% increase in Qorvo's earnings per share this fiscal year, followed by double-digit percentage growth once again in the next one. Qorvo seems capable of achieving such impressive growth rates because sales of 5G smartphones are expected to take off and are using more wireless chips because of radio frequency (RF) complexity.

Qorvo management has been pointing out that each 5G smartphone could carry additional RF content worth $5 to $7. Additionally, it expects sales of 5G smartphones to double to 500 million units next year. So, apart from the success of Apple's iPhone 12 lineup, the secular growth of the 5G smartphone space will be another big growth driver for Qorvo as it counts the top smartphone OEMs (original equipment manufacturers) as clients.

This means that Qorvo is more than just a play on the success of the iPhone 12, and investors looking for a hot 5G stock that can set the market on fire in 2021 should keep it on their radar.